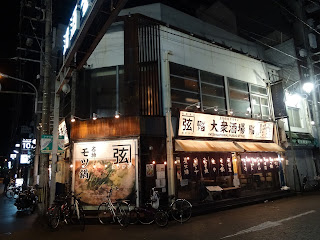 Where I had dinner my first night in Shikoku 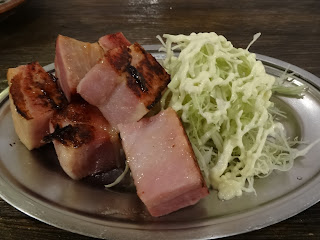 The first dish I ordered at the izakaya ;b 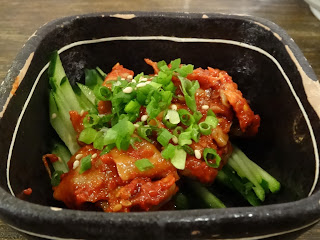 Until I ate this, I didn't realize that there are
Japanese restaurants that serve hellishly spicy food! :O
Even though sushi is my favorite single type of Japanese food by quite a long chalk (and I can't imagine visiting Japan without eating at least one sushi meal), I look forward to trying out other dishes -- particularly those which I don't (often) see on the menu of Japanese restaurants in Hong Kong -- when I'm in what amounts to the closest place to foodie heaven there is on earth.
As part of my trip preparation, I'll research what is the region or city's particular food specialty, and then will make a point to sample it while there.  (For example, I knew to make sure to eat crab when in Hokkaido, soba when in Kyoto, and sanuki udon in Kagawa.)  But there also are times when I leave it to serendipity -- in that I'll go into an interesting looking restaurant and order items on the menu that sound unusual!
On my first night in Takamatsu, I decided to try out an atmospheric looking eatery located in a street full of eateries and bars that was just a few minutes' walk from my hotel.  Very nice smells were wafting out of the corner establishment with "international public style" written out on a sign.  And even though I couldn't quite figure out if that was the restaurant's name or its declared "style", I felt confident enough to slide open its main door, proceed to a counter seat and order myself a large mug of draft beer before even glancing at the English language menu that I was pleasantly surprised that this very local looking place had!
I must admit to having been somewhat intrigued when reading that the rustic eatery's recommended dishes included beef intestines served on a hot plate.  But a dish of "thickly sliced bacon" sounded more enticing -- if not more heart attack-inducing -- and I proceeded to order first that along with a portion of "cabbage with dry black seaweed" (which appeared to be a local favorite) for balance.
Both the "thickly sliced bacon" (chunks of which turned out to be far thicker than I had imagined would be the case!) and the cabbage (which also was liberally drenched with delicious sesame oil) went very well with the draft beer that I knew from experience would be a super smooth lager that would hit the spot.  But rather than order another mug of nama biru, I decided to try what was listed on the drinks section of the menu as "lychee sake".
Upon doing so, the waiter asked me if I wanted it mixed with soda or vodka.  Noticing my consternation, he suggested that I have it "on the rocks".  Having had yuzu-flavored sake served with ice at Sake Bar Ginn, I agreed to that idea and was quite happy when the waiter brought me a generous sized glass of the ordered drink.
Imagine my shock, then, when my first sip of the fruity concoction got me realizing that I had ordered something far higher in alcohol volume than the fruit flavored sake I've had at my favorite sake bar in Hong Kong -- and belatedly figuring out that sake on the eatery's menu actually was a generic reference to alcohol rather than what the rest of the world knows as sake but the Japanese specifically refer to as nihonshu (translation: Japanese alcohol)!
Deciding that I needed more food to coat my stomach when imbibing that pretty strong -- even if sweet tasting -- lychee sake, I really was tempted to go for the beef intestines dish but figured that it would be too substantial to have as my third food order of the night.  Opting instead for the "spicy cod stomach" on the menu, and figuring it would be something like mentaiko, I ended up being presented with a portion of the spiciest dish I have ever tasted in Japan, and maybe even ever!
I'm generally a proponent of the idea that spicy food and alcohol should not be consumed together.  But no way was I going to let any of the flaming hot "spicy cod stomach" (whose color got me suspecting that its cultural origins are in the Korean Peninsula) and lychee sake go to waste as they actually were both pretty delicious!  The bad thing of course is that I ended up draining the glass of highly alcoholic drink much faster than I would otherwise have done -- and when I got back to my hotel room and looked into the mirror, my face literally was the reddest I have ever seen it be!
Minutes after I entered the room, I had fallen fast asleep.  Surprisingly though, when I woke the next door, I didn't have any symptoms of a hangover: no headache, no nausea, no tiredness even!  So I'm actually not sure if I was drunk the night before -- and whether my literally red face was the result of the super spicy food or strongly alcoholic drink... ;b
Posted by YTSL at 6:04 PM

Concerning spicy food, Sake (I mean real Sake) might be very difficult to pair with. However in the past few years I found a red wine made from one particular grape which could handle spicy food very well. Next time, try to pair spicy stuffs with Pinot Noir. I have tried Alsace Pinot Noir and New Zealand Pinot Noir. Both are good. If only I could get my hands on some reasonably priced German Pinot Noir...... If you like Numb & Spicy stuffs Pinot Noir would be even better.

On the other hand, Pinot Noir could be paired with most anything any everything in general......

Hehe... sounds like you're quite the Pinot Noir fan!

I usually go for fruit juices or something equally non-alcoholic (and also non-carbonated) when eating spicy food... because, well, I often need to gulp lots of the drink to put out the fire that feels like it's burning in my mouth! Chalk it up to my Malaysian upbringing but given a choice, I'd go for rose syrup water with a dash of lime... ;b

I'm not exactly a fan of Pinot Noir. I just find wine made from this grape very food friendly and would generally work for anything and everything. With other red wine made from Cabinet Sauvignon or Syrah they would just accentuate the spiciness and make you choke.

For non-alcoholic drink to put down the spice I would usually use Thai Iced Tea if I could.

I'm not a wine person, so will just take your word re Pinot Noir vis a vis other wines. As for iced tea: I actually prefer the Hong Kong and American versions... ;)

I actually like White wine and Sparking wine more than Reds. They are generally easier to select and are usually more affordable.

Maybe just take a step back. Wine, beer, sake, and any other drinks are usually used to wash down our food. If we are lucky and doing it right, it would be a fond experience.

Back to Pinot Noir, it is actually very tricky. Alsace Pinot Noir wines are usually very reasonably priced and very approcheable. Some are as cheap as HKD70.- (cheaper than some craft beer at the same volume) They are a minority of the wine region, but if a wine maker there dare to make them, they are usually good. If it happens you have a chance to taste one of these, at least have a sip. You might be surprised.

I would usually stay away from those Pinot Noirs from Burgundy as they are a mystery and many of them cost an arm and a leg. I wouldn't mind trying some Domaine de la Romani Conti if I hit the Mark Six jackpot, but that reality is pretty thin.

I generally prefer beers (and nihonshu, etc.) to wine -- but when I do drink wine, I do prefer white and sparkling wines to reds. (I particularly like Reislings, which I was introduced to in Mainz by my German friend.) I thank you for the Alsace Pinot Noir tip nonetheless! :)

I constantly spent mmy half an hour to read this blog's content daily along with a cup
of coffee.

Thanks for letting me know this. Have to say though that considering that you're commenting on one of the older posts, I must admit to wondering in what order you've been reading this blog! Put another way: you may have a lot more content to read. ;b

I like tthe helpful information you provide in your articles.

I'll bookmark your weblog and check again here
frequently. I am quite certain I'll learn many new stuff riight here!
Best off luck for the next!

Glad to hear from you again, and that you're planning to return to check out more of my blog!

I all the time used tto study paragraph in news papers but now as I
am a user of net so from now I am using net for posts, thanks to web.

Am going to assume it's the same Anonymous I've been communicating with all this time on this thread. And yes, there are websites/blogs, etc. which can be informative rather than just newspapers now. :)