On my most recent trip to the Land of the Rising Sun, I made Takamatsu my base for the first four days of my visit.  The capital of Kagawa, Japan's smallest prefecture, is one of those cities that few non-Japanese have heard of.  But tell Japanese people that you're planning to go there, and they'll invariably assume that you will be spending time in Ritsurin Koen, a 75 hectare (i.e., 750,000 square meters) daimyo strolling garden that is one of fewer than 40 sites in the country to have been designated as a "Special Place of Scenic Beauty".

Work began in 1642 on this garden which cleverly incorporates pine-clad Mount Shiun into its backdrop and wasn't actually completed until 1754.  Although Ritsurin Koen's not considered to be one of the three great gardens of Japan (unlike Kanazawa's Kenroku-en or Okayama's Korakuen), I still found it plenty impressive and enjoyed the hours I spent checking it out even though it rained for the bulk of my visit!  (And yes, I did have an umbrella to keep me from getting too wet but I think it's a testament to this Shikoku site's allure that I was okay with walking on the unpaved paths within the garden that the rain had turned rather muddy!) 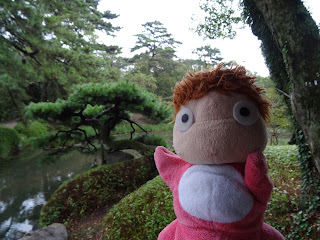 Puppet Ponyo points to one of the 1,400 pine trees
to be found within Ritsurin Koen 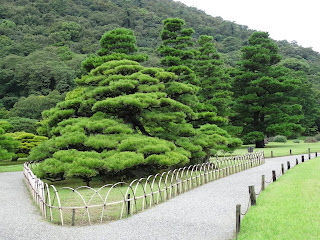 Four of the pine trees in this photo were planted in the early part
of the 20th century by members of the Japanese royal family, and
one was planted in 1922 by the future King Edward VIII of Britain 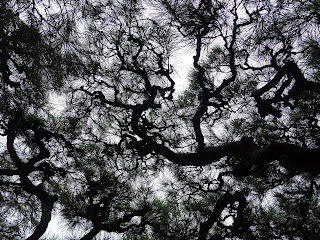 I really liked the section of the garden where one could walk
under several pine trees and look up to see sights like that
pictured above which got me thinking of abstract art :) 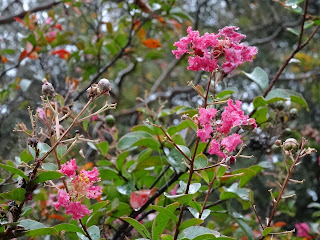 Still, here's visual evidence that it's not all pine trees there... 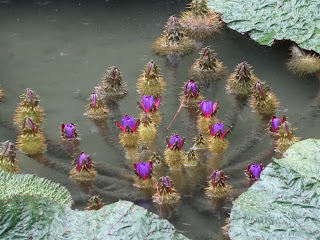 ...and I don't know what these are but I appreciated their
adding bright color to the gray as well as rainy day scenery 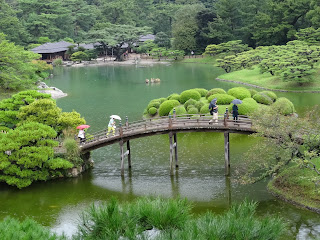 Sculpted to resemble Mount Fuji, the landscaped hill known as
Hiraiho offers up this picturesque view from its top 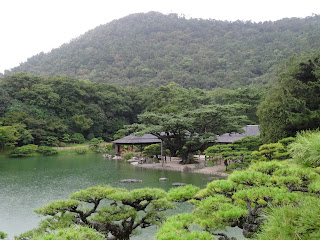 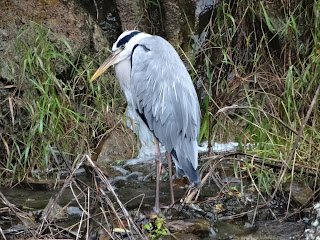 This heron stood so still for so long by the edge of the garden
abutting Mount Shiun that I wondered for a time if it was alive! ;O
Posted by YTSL at 10:54 PM

What a beautiful garden. Lots of interesting things to see as one walks around. In addition to pointing out all the pine trees maybe Puppet Ponyo is pointing to say she would like to climb one of them. But then you'd have to remove the pine pitch from her clothes, hair, etc.

The plant growing in the water in the 5th photo looks like a species of thistle. Here in some states they're considered invasive but I think their oil is used in natural products.

Ritsurin really is beautiful -- and I'm not sure if I managed to convey the sense of how large and expansive it is.

Hmmm re Puppet Ponyo wanting to climb one of those pine trees. She can be on the careful side. As it is, she hardly ventured out of my backpack that day for fear of getting wet!

And interesting suggestion re the plant in photo #5: do thistles grow in water? I have to research that...

Thistles grow in marshlands but didn't find anything about in water. Plus when I compared photos of thistles with your photo they aren't really that similar. The thick stalks with spikes, the lack of leaves, etc. Looking at the open flowers and unopened buds they look a little sinister. Like I wouldn't reach down and touch them.

My thought was that those were some kind of water lilies... but spikier than any I have ever previously seen. So... something like the love child of a water lily and a thistle? ;b

This is one of the best entries from all your Japan vacations. Always the gracious host, Puppet Ponyo introduces one to the garden environment...The photo of the view from the hill of the bridge could be from a classical Japanese painting or scroll...

There is something very wise and ancient-looking about the heron, caught in a pose of absolute stillness. I think the poses of both Puppet Ponyo and the heron capture this Zen-like meditative walk through this garden.

I'm glad you like this Japan trip photo-essay. It was difficult taking a photo of Puppet Ponyo without getting her wet that day, so I only took just that one snap. The heron didn't seem to mind being in the rain much at all though -- surprisingly!