Sashimi and sushi in Takamatsu and Osaka 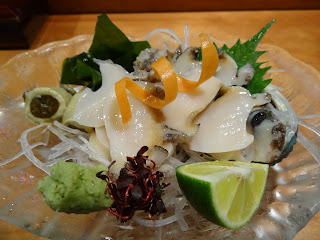 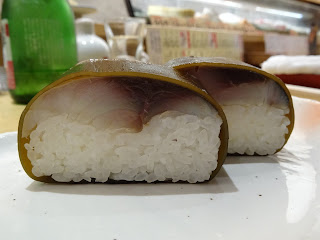 
Given my love of sushi (and sashimi), I can't imagine not having at least one raw fish meal on my Japan trips.  And on this most recent visit to the birthplace of sushi (and so much else that's delicious!), I ended up treating myself to not just one decadent dinner each at sushi-ya, dedicated sushi (and sashimi) restaurants, in Takamatsu and Osaka (the two cities where I spent my evenings this time around).


After an unsatisfying sushi-ya experience in Matsue in May, which came about after I decided to splurge on an omakase meal, only to find that the sushi chef had gone for "safe" rather than truly interesting options (probably because he feared that a foreign palate would not be prepared for more unusual Japanese fare), I decided to take matters into my own hands and order a la carte while seated at the counter and thus able to see what was available to try.


As it so happened, I lucked out at Takamatsu's Setozushi (located on the opposite side of the restaurant-filled alley from the "international public style" establishment where I had had a satisfying dinner the previous night) -- not only because its owner and primary sushi chef could speak English and was pretty friendly but, also, because, as it so happened, two of his high school buddies were visiting that evening!  The result was that conversation flowed easily, various types of alcohol were shared and food recommendations were made on that occasion!


Before we got to chatting to the chef-owner and his friends, I had decided to begin with a sashimi assortment (moriawase -- the Japanese word for "assorted" -- is such a great word to know in any Japanese restaurant!).  Next, I had my first ever plate of awabi (abalone) sashimi, something I had long wanted to try ever since seeing Anthony Bourdain it with so much relish in one of his Japan No Reservations episodes -- and I'm happy to report that it really does taste delicious; distinctly of the sea, even while having a surprisingly similar crunchy texture to tsubagai (Japanese whelk) rather than the chewier, more absorbent cooked abalone I've eaten in Chinese restaurants.


Deciding to move on to sushi, I began with a palette cleanser of umeshisho maki (pickled plum and shisho leaf roll) before plumping for one order each of uni gunkan (sea urchin "warship"-style) and ikura gunkan (salmon roe, "warship"-style).  At this point, I got to asking the chef where the different ingredients came from and which, in particular, came from the nearby Seto Inland Sea -- and upon learning that such as the tai (red sea bream), tako (octopus) and saba (mackerel) were from there, I went ahead and tried a Seto Inland Sea sushi selection!


For the final dinner of my trip a few nights later, I decided to go for someplace tried and true: a branch of Ganko Sushi, a chain of restaurants which had its beginnings in 1963, in a tiny Osaka sushi shop.  Again, I could not resist ordering a plate of awabi (abalone) sashimi to enjoy, began my meal with sashimi before progressing to sushi, and -- it should almost go unsaid! -- had some nihonshu (what is known as sake outside of Japan) to go with my dinner.

One of the best things about dining in Japan is finding seasonal and regional specialties on the menu; and that evening, I learnt about -- and consequently sampled -- a type of sushi that I previously hadn't known existed!  Although I do like edomae sushi a lot, it can be nice to have some Osaka-style pressed/box sushi or something else altogether for a change.  So, upon spotting some logged shape sushi in the Osaka restaurant's glass display, I decided to try some.

As I was being served the dish, I asked the sushi chef if it was Kyoto style sushi, previously the only log-shaped type of sushi I knew about, and was told that it was actually Wakayama-style fermented sushi!  This got me quaking a bit, as I remembered the horrified reaction of Karl Pilkington (of An Idiot Abroad fame) to eating fermented sushi!!  Fortunately, however, what I had was mackerel narezushi rather than the longer fermented carp funazushi (that's native to Shiga) -- and I found it tasty, even while noticeably more vinegary and sour than the Edo-style sushi that originated in Tokyo and now has become by far the most popular the world over. :b
Posted by YTSL at 7:57 PM