Much to appreciate artistically at Konpira-san's Shoin 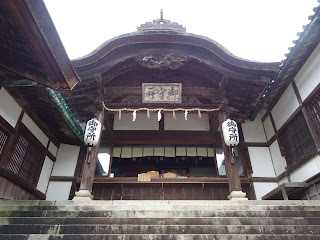 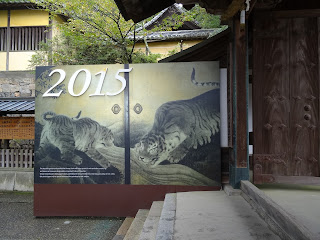 Photography of the Edo period master painter's works
weren't allowed, so this image has to suffice... 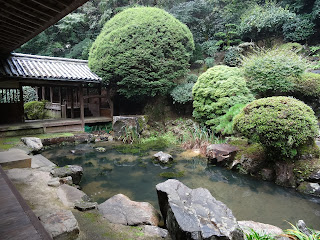 ...but they did allow photographs to be taken of this
lovely, tranquil garden within the grounds of the Shoin


As it may already have been surmised, it took no small amount of time -- along with effort -- for me to ascend (never mind descend) Konpira-san's close-to-1,400-stone-stepped Sando Approach on the second day of my recent Japan trip.  And in all honesty, one of the reasons that it took me as long as it did to go all the way up was that there was quite a bit of interesting things to see along the way.


For example, after passing through the Main Gate but before I got the complex's Asashi-no-yashiro shrine, I actually paused for a bit and made a detour to check out the art on show within Konpira-san's Shoin. More specifically, within the building's walls can be found paintings on sliding doors and wall murals by Maruyama Okyo of cranes in a variety of poses, tigers in different attitudes (e.g., sleeping, glaring, hunting, and drinking quietly), seven Chinese sages and three accompanying children engaging in philosophical discussion and such in a bamboo grove, and idyllic mountain and waterside scenery.


Although they appear to not be as highly regarded, I also was impressed by 19th century artist Mori Kansai's ink painting depicting a grand tree and eagle, and Murata Tanryo's view of a snow-covered Mount Fuji that includes a deer hunt taking place on forested foot-slopes -- both of which similarly adorn the walls of rooms within the Shoin.  And although there may be some who may not have given the gardens surrounding the building (which actually are not visible from outside of the building) much thought, I would have been quite happy to gaze at them for a bit as well as feast my eyes on the Shoin's painted treasures.

Looking back, the visit to Konpira-san allowed me to combine many of the things I like including hiking and viewing great art!  Thus it is that even though I would not consider myself a religious person nor an actual disciple of Shinto, I got much out of visiting this ancient Shinto shrine -- one that, in terms of degree of appreciation, I'd rate highly along with the likes of Kyoto's more well known Fushimi Inari Shrine and Tokyo's Meiji Jingu.
Posted by YTSL at 11:13 PM