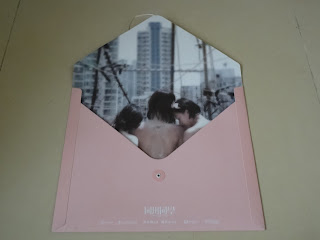 Lazy Hazy Crazy gift folder -- for whom
would it be best suited to use/be given as a present?


Who is your target audience?  That's the burning question I wanted to ask Jody Luk, the director-scriptwriter of Lazy Hazy Crazy upon coming out of the screening of her first directorial effort -- which left me feeling perplexed and, frankly, also somewhat dirty, like I had been slimed.


Going into the movie's screening, I knew that -- like with Philip Yung's May We Chat (which I had put on my top ten Hong Kong movies of 2013 list) -- its story revolves around teenaged schoolgirls who engaged in "compensated dating", the polite term used in Hong Kong (and Japan) for what's really voluntary underage prostitution.  I also was aware of Hazy Lazy Crazy's Category III rating and did expect to see bare breasts being shown several times over the course of the film.


However, especially given that the offering's director-scriptwriter is female, I did not expect its cinematography (by Jam Yau) to be so obviously geared to titillate heterosexual males -- with lingering shots of such as long-legged schoolgirls in very short PE shorts and copious scenes featuring full frontal nudity on the part of the females (including improbable ones of the girls uninhibitedly bathing naked on the rooftop of a tong lau) but the men's "private parts" always being conveniently blocked from view.


What makes things most unsettling is that the three females at the center of Lazy Hazy Crazy, and who are shown in various stages of undress (including "the full monty") in the film -- Malaysian transplant Alice (Fish Liew), bespectacled Tracy (Kwok Yik Sum) and confident Chloe (Mak Tsz Yi) -- are supposed to be 15 year olds, yet are played by actresses who are quite a bit older than their characters.  (For the record: Liew was born in 1990, Kwok in 1995 and Mak in 1991; making them 25, 20 and 24 years old respectively at the time of the movie's release -- although it might be said that their bodies do indeed look like they belong to those of young teenage girls!)


If this were not questionable enough, Lazy Hazy Crazy purports to marry the sexual imagery on view to a coming-of-age tale which appears best suited for female viewers who actually would be below the age required to legally view a Category III film in Hong Kong!  And the offering's schizophrenic nature also manifests itself in the movie's main characters regularly veering between moments of extreme childish innocence and troubling sexual maturity way beyond their years.


Among other things, at least one of the girls alternates for a substantial section of the movie between having an innocent schoolgirl crush for her school's basketball star (Tse Chit Chun) and maintaining a carnal relationship with an equally good-looking older man (Gregory Wong).  Then there's the curious spectacle of the three of them staying united in their love for a pet dog even while acting like utter bitches towards one another as a result of their being involved in a couple of love triangles!


All in all, it seems as though its inexperienced helmer was unable to decide on a single dominant tone as well as theme for the film, among other directorial deficiencies.  But because of her industry links (with such as the movie's producer Pang Ho Cheung, for whom she's co-scripted the likes of Women Who Flirt) and subsequent clout, she managed to get a film made that didn't deserve to have been -- or, at the very least, would have benefited tremendously from more serious discussion as to what it was trying to say and accomplish.