The cinematic wreck that is The Crossing II (film review) 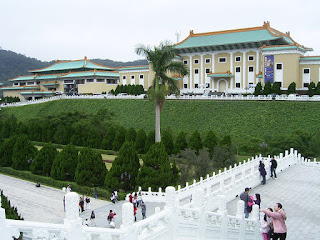 
Ten months ago now, I viewed the first part of John Woo's latest star-studded two-part epic and looked forward to checking out the ambitious work's concluding chapter, which was then scheduled to be released in May 2015.  But while mainland Chinese moviegoers only had to wait until July to view The Crossing II (and viewers in Taiwan and Singapore could go see the film in cinemas in August), those of us in Hong Kong have had to wait 10 whole months to check it out -- and even then, this overdue offering is playing on just two cinema screens here (which says much about the anticipated amount of interest -- or, rather, lack thereof -- for it)!


Perhaps because its makers knew that there'd be a long wait before The Crossing II would get into cinemas, they decided to help refresh the audience's memories by repeating some of the scenes and moments in the first film they deemed key in the first third or so of the second movie.  In particular, we are again shown a Taiwanese doctor (Takeshi Kaneshiro) pining for his Japanese sweetheart (Masami Nasagawa), a Chinese woman (Zhang Ziyi) resorting to prostitution to get the necessary funds to continue her search for her beloved who she believes is now in Taiwan, and a Koumintang general's wife (Song Hye Kyo) sent to safety in Taiwan by her devoted husband (Huang Xiaoming).


But if they really had cared about their viewers, those behind The Crossing I and II would just have made one single film rather than unnecessarily split their offering into two.  For even while it possesses three main sub-plots, this rambling work actually doesn't have sufficient substance to make the decision to structure it as a two part epic seem anything other than commercially driven.  Worse, while The Crossing I tells the stories of six characters, The Crossing II halves the number of the characters focused upon -- and goes on to reveal that only three out of the sprawling saga's six supposedly important characters were on board the Taiping when it made its final journey!

Considering how much was made in the lead-up publicity about The Crossing being linked to the disaster at sea that claimed more than 1,000 lives, it's really amazing how little of The Crossing II, forget The Crossing I, takes place on the ill-fated Taiping.  Strange too is how neither film is a conventional disaster movie per se; with the first two-hour-plus instalment's copious battle scenes helping to make it feel primarily like a war epic while the second also over-two-hour-long work ends up coming across primarily as a wanna-be romance involving three pairs of lovers who a single Shanghai photographer appears to have separately photographed.


In addition, at two late points in this saga, a female character makes a pronouncement that gets one thinking that John Woo may have intended for The Crossing II to comment on the suffering, but also applaud the endurance, of the women who lived on both sides of the Taiwan Strait during the turbulent times leading up to 1949 -- the year in which the Taiping sank (and no, this is not a spoiler but, rather, a known fact), Chiang Kai Shek evacuated his government to Taiwan and the Communists set up the People's Republic of China on the mainland.


This would be admirable as well as interesting, if not for John Woo being unable to breathe life into the film's female characters and incapable of having them evoke even half the amount of sympathy one has for The Crossing II's main man.  South Korean actress Song Hye Kyo's manful struggles to play a Chinese woman is almost besides the point when her Yunfen character is not much more than a pretty "flower vase". And while Zhang Ziyi's Yu Zhen is accorded more depth and resilience, the throwaway manner in which her search for her man is "resolved" makes her story seem emotionally flimsy.

In contrast, Takeshi Kaneshiro's Yan Zekun may have the most tragic life of all but his character also is the most admirable, and his story is the most fleshed out.  Yan Zekun is shown to be an exemplary doctor, dutiful son and caring family man as well as a faithful lover -- and the actor playing him to be a talent who deserves far better than to have to be in a vehicle full of leaks and consequently liable to sink without much trace!

I take great interest in reading this review because I'm interested in sea disasters and the personal lives of the passengers set against the backdrop of the historical time period in which they occur (I confess to owning about a hundred books on the Titanic)...However, after reading your review and others online, I'm not anxious to view your "cinematic wreck."

There isn't a great deal of online information about the Taiping, which is understandable since the ship sank so quickly, with not many survivors. I doubt if John Woo is the right director for this project, anyway. As you mention in your review, his seeming inability to paint complete character portraits of women, has always been a fault of his movies. Could this be the lingering influence of Chang Cheh?

(As a footnote, I'd like to mention another maritime disaster that took place during another turbulent situation, in 1945. The Wilhelm Gustloff was a German ship packed with refugees and soldiers, who were fleeing the advancing Soviet army. A Russian sub torpedoed the ship and it sank in the cold waters of the Baltic. Current estimates put the loss of lives between 9,400 to possibly over 10,000 - making it the worse loss of life in maritime recorded history).

Interesting re your interest in sea disasters! Do you live near the sea and/or have spent much time in boats, by any chance?

I can imagine John Woo being the right director for a disaster movie. I just found it surprising that his "passion project" focused as much on romance and female characters as it did -- for yes, I would agree with you that those are hardly his forte.

To answer your question, I don't live too far from the sea here in Florida. When I lived in New York, I used to enjoy spending time at the cruiseship terminal in Manhattan. I've only been on one cruise, that was on the QE2, that queen of British ships, before it was taken out of service - it now rotting at a port in Dubai...Hong Kong is an ideal location for me, because I love taking ferries to islands, and then exploring them on long walks. However, I'm basically an earthbound person, with a special attraction to rock formations (and the anthropomorphism I associate with them). Again, Hong Kong's proximity to geological features and the sea is one of the things that make it so special!

We sound similar: having lived close to the sea/water most of our lives but preferring the land, etc. And I agree that Hong Kong's proximity to (cool) geological features and the sea make it special. :)