At some point when climbing up Konpira-san's Sando Approach, I got to wondering how come a Shinto shrine dedicated to sailors and seafaring would be located high up a 521-meter-high hill (whose Japanese name translates into English as Elephant's Head Mountain!).

Since my return from Japan, I've found two possible explanations for this: with one positing that being up on a mountain helps people to imagine and realize how deep seas and oceans can be; and another suggesting that Mount Zozu (on whose slopes Konpira-san is located) serves as a landmark for seafarers navigating the tricky waters of the Seto Inland Sea.

Regardless of which is the more accepted answer to that puzzle, I was determined to go all the way up all 1,368 steps of the Sando Approach to Konpira-san's Oku-sha (inner shrine) rather than just settle -- like many people do -- for getting up to the main shrine located on the same level as the approach's 785th stone step.  And even though conditions were too misty for me to get good views from either the viewpoint near the main shrine or further up the hill of the town below and beyond, I still do consider the experience to have been worth it -- as well as pretty exhausting! :b 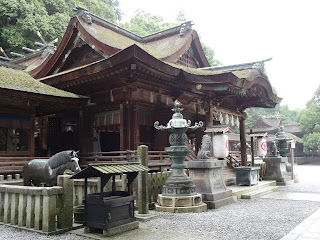 Like the complex as a whole, there are many interesting bits
to check out over at Konpira-san's Hongu (main shrine) 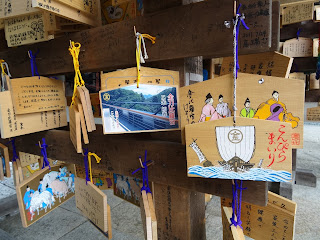 I saw at least four different designs on the ema (votive plaques),
including one on which ships prominently featured 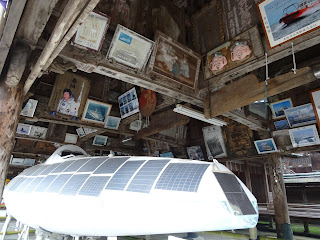 Unusually, Kotohira-san's Ema Hall not only contains ema but also
photos of ships and a space traveller, and an actual mini-submarine! 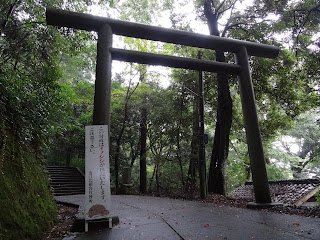 On the way up to the inner shrine, I passed by a wild boar
warning sign; happily though, I did not end up having
a sighting of this creature to add to my Japan snake sightings!! 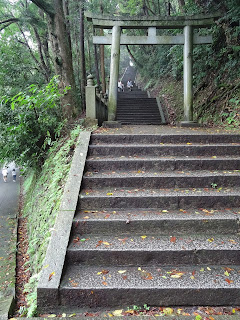 What I did see though were a number of other torii
-- and a heck of a lot more stone steps! ;( 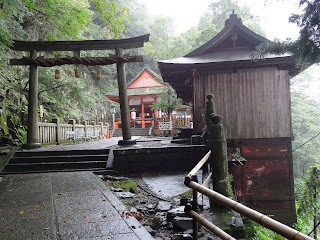 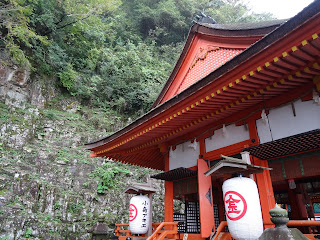 Can you see the two tengu faces on the rock wall? 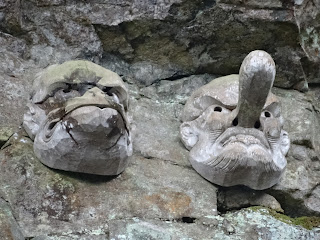 In a bar in Osaka a few evenings later, I spoke to a man
who told me he had been up to Konpira's inner shrine --
but had not known that there were any tengu carvings in the area! ;D
Posted by YTSL at 10:31 PM

This is an informative recounting of your marathon walk up the stone steps to the inner shrine...What attracts me about the settings of Asian temples and shrines is the frequent presence of nature, especially in Japan...Animism is the closest I am to being religious and in reading this web entry, it is possible to feel the presence of spirits in nature.

Thanks for your interest in this blog post's contents. And I agree that many of Japan's temples and shrines are located in settings that make you feel the presence of nature spirits -- many of which Shinto's kami in fact are supposed to be. :)