More than just the Byodoin temple at Uji (Photo-essay)

The second largest city in Kyoto Prefecture, Uji, lies just 14.44 kilometers from Kyoto.  Home to two of the 17 properties collectively on the UNESCO World Heritage list as the historic monuments of ancient Kyoto, it's easy to get there by train from the former imperial city that was Japan's capital between the yearsr 794 and 1868.  So under normal circumstances, I'd have gone there when I based myself in Kyoto two years ago.

As it so happens though, Uji's most famous attraction, the close-to-1,000-year-old Byodoin temple (an image of whose Phoenix Hall is on Japanese 5 Yen coins, while an image of a phoenix statue on the hall's roof can be seen on the 10,000 Yen note), was undergoing a one and half renovation at the time.  Consequently, it wasn't until this past September that I went and visited this pleasant locale which also is famed for being Japan's tea capital on a day trip from Osaka -- and as luck would have it, serendipitously crossed paths in the Byodoin temple's grounds with a friend from Hong Kong who's spending a year in the country! :b 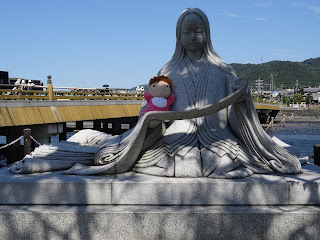 On the way to the Byodoin temple, Puppet Ponyo paused to pose
on the bank of the Uji River with a statue of Murasaki Shikibu,
the nickname given to the anonymous author of The Tale of Genji 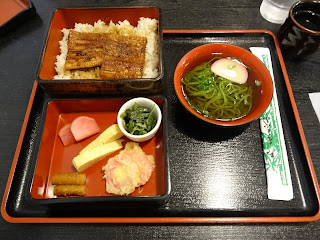 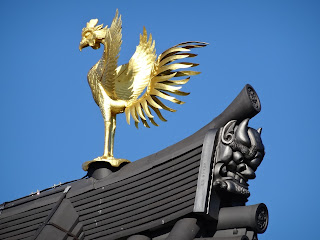 One of a pair of shiny gold phoenix statues standing atop Byodoin's
Phoenix Hall, that brought to mind Kinkakuji's gold phoenix 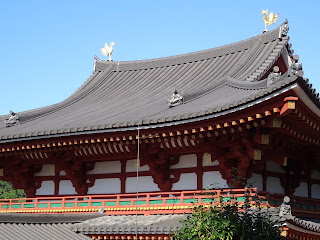 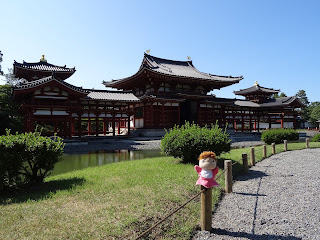 A wide-eyed Puppet Ponyo poses with the Phoenix Hall,
which is so much wider than it is tall, thanks to having two
corridors representing wings (along with one representing the tail) 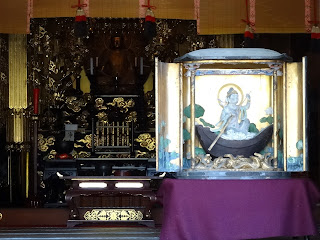 Photography is not allowed inside the Phoenix Hall but
in another part of the Byodoin temple, photos could be
taken of these remarkable Buddha images 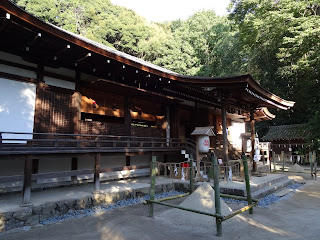 Across the Uji River from the Byodoin temple lies its guardian shrine,
which happens to be the oldest standing Shinto shrine in Japan 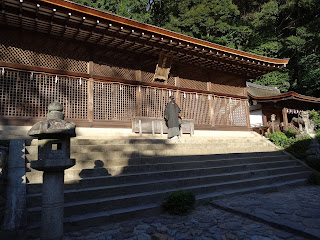 Less colorful and considerably quieter than Byodoin, the Ujigami Shrine
felt less touristy and more atmospheric  -- and, for me, is a
"shouldn't miss" along with the far more well known Byodoin temple  :b
Posted by YTSL at 11:11 PM

That's a brand new pair of phoenix at the top! They were in a green, weathered bronze colour when I visited before the big renovation. I wonder if they are planning to keep them polished and bling bling or if they will be allowed to gradually weather and oxidize in time.

Also, looks like you really enjoyed Ujigami Jinja as well!

You visited Byodoin before the big facelift took place, right? Have to say that much of the Phoenix Hall looks newer than I personally would like. On the other hand, the interior of the main hall looks largely unrenovated -- although I saw a couple of conservators hard at work in their on the upper walls on my visit.

And yes, I enjoyed Ujigami Jinja too. Wish I could have gone up the hill near it but my bruised toe wasn't cooperating that day -- alas!

In reading this excellent photo-essay, I got a flashback of the Byodo-in Temple, in the Valley of the Temples Memorial Park, Oahu, Hawaii...When I searched online, I found out that the temple in Hawaii is indeed a smaller scale replica of Byodoin at Uji!

Ponyo's pose with the Phoenix Hall, proves yet again to me, that she is truly a unique presenter of travel sites...And she radiates contentment and near bliss, posing in the literary and maternal presence of Murasaki Shikibu.

Thanks for alerting me to the existence of the Valley of the Temples Memorial Park. It sounds like an interesting place!

Some people might be feel it on the sacrilegious side for Ponyo to pose for photos in the grounds of Byodoin and also with the statue of Murasaki Shikibu -- but I know that there also are people, like you, who approve. :)

The food looks delicious. In the photo with the statue of Murasaki Shikibu my initial reaction was Puppet Ponyo waiting for the Tale of Genji to be read aloud to her....

The food was delicious! I liked being able to eat some green tea dish at Uji and you know what the Japanese think of about eel -- that it helps give energy on a hot summer day.

As for Puppet Ponyo: Could be re how she was feeling. My own sense was that she was feeling a bit surprised that the good lady was so cold and grey, not quite realizing that it was just a statue of Murasaki Shikibu... ;)