Grave of the Fireflies, a movie that moved me beyond tears (film review) 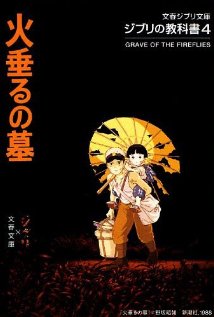 A Studio Ghibli masterpiece that was
not directed by Hayao Miyazaki


Early during his career, Studio Ghibli co-founder Hayao Miyazaki had a pet project that he wanted to turn into a film.  But he had problems securing funding for it because it was thought that not many people would want to see "a movie about two little kids and a monster in rural Japan".  And it was not until My Neighbor Totoro was mooted as a double bill along with a more realistic work based on a well-known book and looked upon as containing an "educational" element that would result in teachers bringing their classes to see it that Miyazaki's cinematic gem got the greenlight to be made.


Isao Takahata's Grave of the Fireflies most certainly is an educational work.  It also happens to be one of the saddest films -- animated or not -- that I've ever seen in my life.  For even while, its story revolves around two children as is the case with My Neighbor Totoro, what is shown happening to them is the stuff of adult nightmares.  And this Studio Ghibli production not being a live action work most definitely does not make any of its scenes less powerfully impacting.


The first line you hear in the film involves a young teenaged boy named Seita (Tsutomo Tatsumi) telling you the date that he died.  Yes, the story is narrated by a dead boy, and the first few minutes of the movie shows his last moments -- in a spooky train station whose staff have become used to finding corpses in the building and think nothing of rifling through a dead boy's belongings and throwing away something they consider worthless.


For non-Japanese folks, these scenes are horribly chilling to view.  And I can but imagine how contemporary Japanese folks watching these scenes set shortly after the end of the Second World War would feel when beholding them.


After a brief dreamlike interlude, the film goes further back in time -- to mere minutes before the city of Kobe was firebombed by the US air force.  In their household compound, Keita -- the man of the family now, since his naval officer father is far away -- is working to ensure the safety of his family's most precious belongings and bids his mother, who has a heart condition, to go first to the bomb shelter, telling her that he will bring his 5-year-old sister Setsuko (Ayako Shiraishi) along to join her shortly.


The next time Keita sees his mother, she is covered in bandages and blood in a makeshift hospital (in what used to be a school).  Setsuko never gets to see her mother again before the badly injured woman dies, her body covered by maggots and burnt together with numerous others in a large pyre.

Effectively orphans (especially with his naval officer father not answering -- or even getting? -- his letters), Keita and Setsuko go and stay with an aunt -- who turns out to be far less sympathetic than should be the case.  After various slights and other mistreatments, Keita decides to move out along with Setsuko and move into an abandoned bomb shelter by a picturesque river.


It's but a matter of time before they encounter difficulties, and their living condition deteriorates badly.  But Grave of the Fireflies also contains some beautiful scenes showing the innocent joy and happiness that children can feel.  On one level, they are lovely to see.  But on another, because the audience knows the two main characters' ultimate fate pretty much from the start, these can actually be  more depressing to watch than those showing, say, Setsuko coming across a dead body lying on a scenic beach.


The film ends with a series of haunting scenes that will tear at your heart.  Although I expected to be reduced to a puddle of tears by its conclusion (hence my not daring to view this anime work for decades!), not that many tears rolled down my cheeks actually. Instead, I literally felt chest pains as the credits roll because Grave of the Fireflies truly is an immensely heart-breaking work.

As can be imagined, this is not a film that I will want to re-watch anytime soon.  And yet, I also come away wanting others to see it, and thinking that only the incredibly cold-hearted and/or unempathetic would not be affected by the movie and not ever want their country, or the world at large, to be at war again; this not least since as this cinematic work that's based on a semi-autobiographical novel by Akiyuki Nosaka, one of whose sisters died of hunger during World War II, shows, in times of war, it often is the most blameless who get the most hurt.

This film is one of the rare gems that wrenches one's heart without resorting to melodrama. It has been years since I watched it but I wasn't even able to read your review in its entirety since not only the film but the emotions it evoked are amazingly still fresh.

It's been more than 24 hours since I viewed "Grave of the Fireflies" and I'm still afraid that I'm going to suddenly burst into tears at some point, with images from the film suddenly appearing in my mind -- and also having appeared in my dreams last night. I'm curious: how much of my review were you able to read until you had to stop?

It's been a while. I heard through the grapevine about your big change. Hope you're doing well!

I actually rewatched this on my flight to Taipei last month. Even on a teeny screen, it lost none of its power. Such a devastating and beautiful film—and like you say, literally heart-breaking. It will stay with me forever. Thanks for writing about it.

On a lighter note, I was happy to see your rating for Our Little Sister—with which I completely concur. I saw it when I was in Taipei and was completely charmed. Made me wish I was one of the sisters!

I gave up at the start of the fifth paragraph.

Aaah... one less paragraph than I thought was the case! ;S

I look forward to your review of Our Little Sister. BTW, another movie that I rewatched on my flight was All's Well Ends Well. Still had me laughing out loud. Plus there was something very comforting about watching it. Must be the nostalgia!

Your plane sounds like it had an excellent film selection! The most recent movie I watched on a plane, "The D Train", was a bust. However, I did 'discover' the excellent "Mcfarland, USA" on another flight earlier this year, and liked it so much I ended up watching it twice! :)

It has been a long time since I saw it, but the film is one you never forget. And that in many ways is a very good thing.

Your review pretty well sums up how I feel about this great film, and judging from these readers comments, they obviously feel the same way. This is a sad film, but to allow that sadness to completely dominate one's memory of the film, would be a mistake. Seita and Setsuko manage to experience some beautiful moments together in nature, and that stays illuminated in my mind, together with the inevitable sadness.

When I view this film, it recalls the time I had visited Hiroshima, on my one and only visit to Japan years ago. Initially, walking around the memorial, I felt bleakly pessimistic. However, after lingering there for quite some time, after listening to the various languages of the many tourists and after observing the expressions on their faces as they reacted to the displays - I felt that dark mood begin to fade. I felt the presence of a spirit that somehow made me feel optimistic, the same kind of feeling I get thinking about the brother and sister from Grave of the Fireflies, and the brighter moments they had in nature.

Yeah, I don't think "Grave of the Fireflies" is a film one can and/or will easily forget -- and agree that that's a good thing.

I've been gratified by the reader comments on this thread. Everyone does appear to be agreed that it's an emotionally devastating film but a very worthwhile watch all the same.

Thanks for sharing your Hiroshima memories. I've never visited that city but would like to. I have to confess though that my reasons for wanting to go there have less to do with atom bomb memorials and more to do with the food Hiroshima's famous for (including Hiroshima style okonomiyaki, Hiroshima oysters, and tsukemen)! ;S