A visit to the Shodoshima set of Twenty-Four Eyes 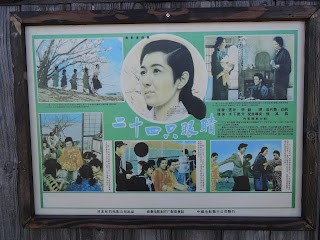 Images from Twenty-Four Eyes, the cinematic masterpiece that
inspired me to travel all the way to Shodoshima! :) 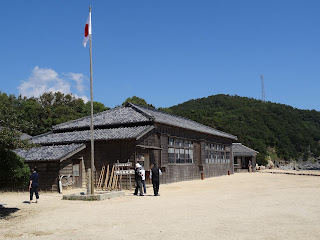 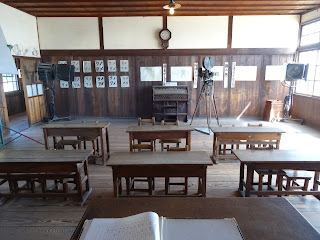 What would have been Miss Pebble's view of her classroom :) 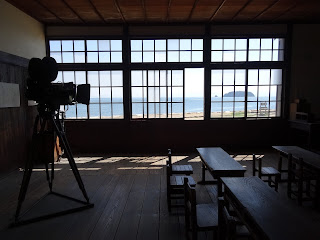 The view from the classroom is superb!
Many years ago, when I was still living in Philadelphia, a good friend who lived in Los Angeles and I would introduce the other to our favorite movies by way of sending each other VHS tapes (yes, it was that long ago!) back and forth with the help of Federal Express and UPS.  Although we initially concentrated on Hong Kong movies, we ended up branching out and including films from other Asian territories into our recommendations mix -- and one fateful day, Fred sent me a 1954 drama directed by Keisuke Kinoshita and starring Hideko Takamine as a lovely lady who goes to teach 12 children (the 24 eyes of the film's title) at a three-room school in a remote part of Shodoshima.


Based on a novel written two years earlier by Sadoshima resident Sakae Tsuboi, Twenty-Four Eyes is one of those rare films that's both highly acclaimed (winning the Golden Globe for Best Foreign Language Film, among other awards) and very popular.  With its story beginning in 1928 and continuing all the way up to 1946, this affecting drama covers the years before, during and after the terrible war which Japan began in Asia -- and very movingly shows how even non-combatants in a quiet and picturesque part of the country were touched, sometimes in extremely saddening ways, by not only war itself but also the nationalization and militarization of Japanese society and culture.


It all would be terribly heavy, and feel like a movie that's too hard going, if not for Twenty-Four Eyes having a lovely protagonist who is full of humanity.  It's next to impossible to not adore Hideko Takamine's "Miss Pebble" character -- who was given that nickname by her 1st year class of students because they decided that she was more that (Koishi) than the "big stone" (Oishi) of her surname! -- and particularly since she's shown to be a compassionate person who cares very much for her pupils' whole being, rather than just their formal education.


Also lending charm to the film is its setting: primarily in a photogenic part of Shodoshima but with a few forays too, including a ferry ride across the Seto Inland Sea to Shikoku and a visit to an ancient Shinto shrine up on a hill.  All those years ago when I first watched Twenty-Four Eyes, it never crossed my mind that I would be able to go to the part of Japan where it had been filmed.  Even more unlikely seeming would have been the idea that I could actually set foot into the very schoolroom (set) that Miss Pebble was seen teaching her students in in the movie.


But that's precisely what I was able to do the day that I took the ferry from Takamatsu over to one of the first islands born to the gods in Japan's creation myth!  For, amazingly, the Twenty-Four Eyes movie set -- an entire reconstructed village that includes shophouses, a narrow canal and a Shinto shrine as well as the three-room schoolhouse -- has been lovingly and beautifully preserved and turned into the Nijushi-no-Hitomi Eigamura (Twenty-Four Eyes Movie Village) whose recent additions include a cinema where the original Twenty-Four Eyes movie screens daily, and a group of sculptures depicting Miss Pebble and her original 12 students playing a game of "scissors-paper-stone".

Rather than be just empty shells, some of the buildings have been turned into shops (selling souvenirs, old time candy, etc.), a couple into restaurants, and -- of course -- the schoolhouse has at least one of its classrooms done up as it was during the filming of the 1954 movie.  There also are exhibitions, including on Keisuke Kinoshita (in one of the rooms in the schoolhouse) and other Shochiku films (a number of which may actually have been at least partially shot on this village set too).

The day that I visited the Nijushi-no-Hitomi Eigamura, there were a number of other people wandering about the place -- the majority of them Japanese but also a surprising number from Hong Kong (brought there by a tour bus).  I'm not sure what those unfamiliar with the movie would make of the place.  But I did get the feeling that most of the people who went there did know about the film and loved it.  And for someone like me, it truly was an incredible treat and thrill to be able to check out this movie village whose buildings one had been in before...in one's dreams. :)
Posted by YTSL at 11:55 PM

I love this place (well, I love everything about Shodoshima).
To answer your question about what people not familiar with the movie would make of the place, the first time I visited it, I hadn't heard about the movie, and I loved it nonetheless. It was my first trip to Japan and the village was my first encounter with war time Japan (reconstructed) daily life, and it was highly interesting and instructive, film or no film.

Thanks for commenting on this blog post and sharing your reaction to the Twenty-Four Eyes Movie Village (pre- and post-viewing the film). A question: wasn't the village supposed to set in pre-war Japan? I ask because Miss Pebble taught at the school before the second world war broke out.

On a more general note: I wish I had more time to spend on Shodoshima, and that I was more mobile on my visit! Ah well, maybe I'll return to the area at some point in the future! :)

What I meant by "wartime Japan" was early Showa, so yes, it includes pre-war too.
Change goes slowly in rural Japan, so the way the village looks, it could be a set for pretty much any time between the early 20th Century to the 1950's.

Thanks for the clarification -- and indeed, one of the pamphlets I picked up at the Twenty-Four Eyes Movie Village states buildings are meant to look like they date back to the "early Showa period". :)