Noodle preferences and escalator etiquette in the Kansai versus Kanto region! 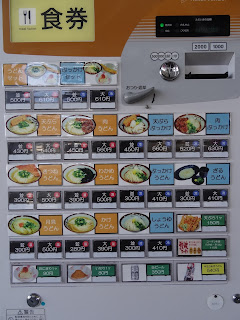 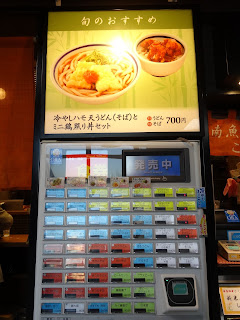 This Kansai area ticket machine has an ICOCA
payment option but fewer helpful pictures on it ;S
Even after I left the bastion of sanuki udon that's the island of Shikoku, I still saw plenty of udon bars on my recent Japan trip.  This was because the other section of the Land of the Rising Sun which I visited was the Kansai region (which is also known, but less commonly these days, as the Kinki region) and udon is the favorite noodle of much of this south-central part of Honshu.
I think it's pretty much inevitable that in this country of food lovers, its greatest regional rivalry is expressed through food preferences.  As far as noodles are concerned, Kanto region residents are just as likely to say they prefer soba to udon than Kansai region residents are likely to state their preference for the thick white wheat flour noodles than the green buckwheat ones.  In addition, when Kanto region residents eat udon, the color of their soup tends to be darker and the taste of it stronger than that favored by Kansai region udon lovers!
Another noticeable way in which the Kansai versus Kanto divide manifests itself is in the form of escalator etiquette.  In the Kanto region (whose largest city is Tokyo), people on an escalator stand on the right and walk on the left (like in Hong Kong and Britain, among other places).  In contrast, the people of Osaka (the Kansai region's largest city) will stand on the left and walk on the right on an escalator!
However, I've noticed that in Kyoto, people tend to stand on the right and walk on the left on escalators: that is, like Kanto rather than (other) Kansai area residents!  One explanation for this is that this city that's home to many historically priceless structures attracts so many visitors (from within Japan as well as outside of it) that such as "escalator rules" have gotten mixed up there.  So it was interesting to see that when the Kyoto gentleman who shared a taxi with me from Horyuji to the nearby train station stepped on the escalator in the latter transport facility, he stood on the right rather than the left side (whereas I, who had gone to Horyuji from Osaka, did the opposite)!
Also, come to think of it, when I visited Kyoto a couple of years back, I had lots of different kind of foods, including soba at a soba specialist which has been serving up the buckwheat noodles since 1465 -- but not once did I eat any udon there.  And after reading about the Kanto region (where Kyoto is located) being where udon fans are more likely to be found than soba lovers, I wonder why and how this came about?!
Posted by YTSL at 11:37 PM