All too soon, it was time for me to leave Shikoku (and its environs, notably Shodoshima).  Happily though, I still had a few more days left to Japan -- and after boarding the train that took me away from the smallest and least populous of Japan's four main islands, and across the Seto-ohashi Bridge (which I had viewed from atop Washu-zan around the same time last year) to Honshu, I went on the shinkansen and a couple of other trains to the first site in Japan to be inscribed on UNESCO's World Heritage list.

Prior to my visiting Horyuji, I knew that this Buddhist temple founded in 607 by Empress Suiko (one of just eight women to have ruled over Japan) and her nephew, Prince Shotoku, is home to the world's oldest surviving wooden buildings.  But I didn't full grasp how large the temple complex is until I got there -- and perhaps because it's so vast, that's why much of it felt so deserted and quiet, especially relative to the major temples and shrines of Kyoto (particularly Kiyomizudera)!

If I had had a better idea of Horyuji's size, I would have allocated more time for my visit.  As it was, I did rush about more than I would have liked.  Even then, I ended up leaving this impressive temple complex so late that I missed the last bus back to the town's train station and, instead, shared a taxi there with a gentleman visiting from Kyoto who also had been spent some time that afternoon under Horyuji's spell... ;) 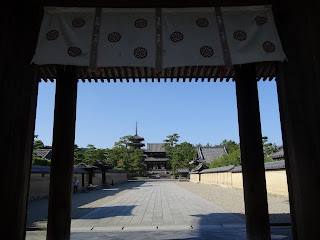 The view from the Nandaimon, Horyuji's southern main gate
which replaced an earlier structure in 1438 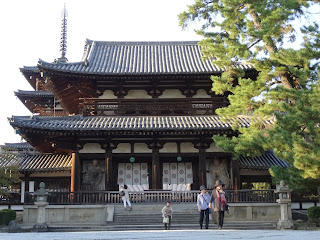 The Chumon (Central Gate) is around eight centuries older,
and on each side of its doorway stand large, fearsome-looking
guardian deities made of clay that date back to the 8th century 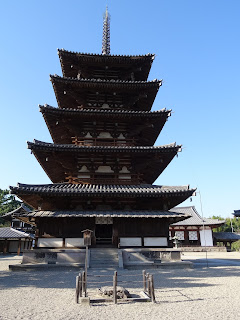 Horyuji's oldest structure is its 5-storey pagoda,
built during the Asuka period (538-710) to house
relics in the form of bone fragments of the Buddha 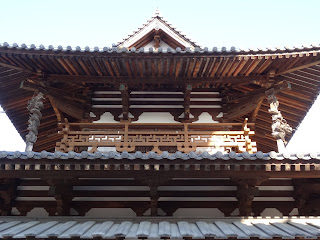 The nearby, similarly ancient Kondo (Main Hall) has
carvings of such as dragons adorning its outer columns
as well as treasured statues and wall paintings inside of it 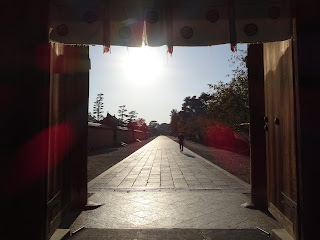 A few hundred meters away, over in Horyuji's Toin Garan
(Eastern Precinct), can be found still other designated
National Treasures and Important Cultural Properties 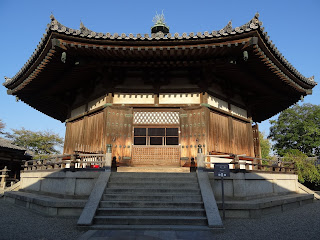 The Eastern Precinct's centerpiece, the 8-century-old
octagonal-shaped Yumedono (Hall of Visions), is said to
have a particularly mystical atmosphere! 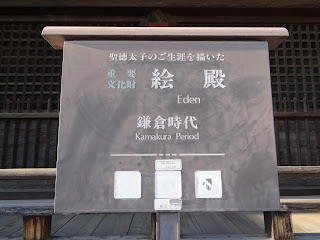 Eden can be found here too -- though, alas, just the
Eden that's the temple complex's Hall of Paintings
rather than the biblical garden of God! ;b 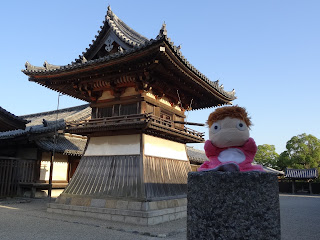 Puppet Ponyo poses near the Toin Soro (Bell House of the
Eastern Precinct), within which hangs an over 1,000-year-old bell!
Posted by YTSL at 7:03 PM

Beautiful pics! Thank you for bringing us to these places :) I hope your toe is on the mend.

What an impressive temple complex. I like the craftsmanship of old wooden temples and looking at the nearby trees - I can almost smell the wood...The Hall of Visions is an especially interesting structure, as is the Bell House...In a previous photo taken in a classroom, Puppet Ponyo looked a bit uneasy, but here at the Toin Soro - she's back in top posing form!

Hi YTSL, this is a wonderful photo collection. I always love seeing Puppet Ponyo. And what an amazing place, full of great historical buildings. The Hall of Visions is very unique and cool looking. Love the architecture.

I've got some catching up to do with you. Hope you're doing well.

Thanks for appreciating my photos -- and my toe is indeed on the mend, thanks! :)

When imagining Horyuji in your mind's eye, add in the smell of incense as well. I noticed it particularly in the Hall of Visions that day.

Re Puppet Ponyo: you noticed her un-ease in the old schoolhouse in Shodoshima too? By the way, the bell house she posed next to has a funny name given to its shape -- hakamgoshi (spreading skirt)! ;)

Another fan of Puppet Ponyo -- yay! I thought twice of walking all the way to the Eastern Precinct but am glad I went. The Hall of Visions is quite a bit smaller than the 5-storey-pagoda and main hall of Horyuji but it is an interesting structure, isn't it? :)

Simply beautiful. This is one gem I should return to Kansai for.

I'd definitely recommend it! I think the "problem" for people who visit Kyoto and Nara is that they don't think Horyuji's worth going all the way to since it's one more temple/shrine in the area. But on this trip, I actually only visited six temples/shrines in total -- and one of them was part of a movie village, so may not really count! ;)

Good to hear you are healing :) All the best for your continued adventures!

Yes, I'm healing, and thanks for your good wishes and visits to the blog. :)

NIce photos and Puppet Ponyo looks like she is taking in everything and laid back. She seems to enjoy her travels with you.

Thanks, and yes, I think that Puppet Ponyo's a happy travel companion for the most part. :)