The real Branch School on the Cape 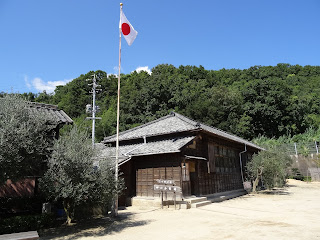 You've seen the replica, now check out the real McCoy! 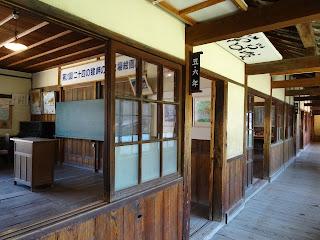 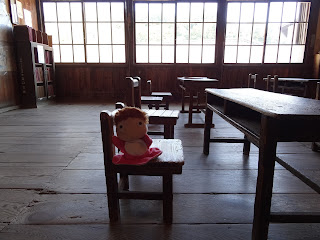 This old schoolhouse was a nice place but Puppet Ponyo looked
on the anxious side when I placed her on a chair in a classroom there;
maybe she thought she'd have to spend the whole afternoon studying? ;b

Approximately 700 meters away from the Twenty-Four Eyes Movie Village lies an old wooden building built in 1902 to house an elementary school.  The Tanoura Branch School of Noma Elementary School (also known more lyrically as the Branch School on the Cape) held its last classes in 1971 but its schoolhouse has been preserved for posterity, with the original organ, and wooden desks and chairs still in place.
This over 100-year-old one-storey, tile-roofed schoolhouse is a well-crafted building which looks like it easily could stand for at least another 100 years.  At the same time, it's a rather simply decorated architectural work which I can't imagine being so beloved if not for the school that it housed being the one cited as that where the admirable Miss Pebble taught in in Twenty-Four Eyes, the influential Sakae Tsuboi novel that was made by Keisuke Kinoshita into a multi-award-winning film.
Born in the village of Sakate, not far from this Meiji era school house and also the Nijusho-no-Hitomi Eigamura, Sakae Tsuboi was only able to complete eight years of schooling before going to work, first as a clerk at the post office and town hall, to help support her family.  But the fifth daughter of a soy sauce barrel maker went from these modest beginnings to become a prize-winning poet, writer of children's stories, novelist, and humanitarian whose last words (she passed away at the age of 67 in 1967) were reported to be "Everyone, be friends".
Although I haven't come across actual written confirmation of this, I think it's pretty likely that Sakae Tsuboi herself spent time as a student at the Branch School on the Cape.  In any case, her shadow definitely looms large in the schoolhouse -- with film stills from Twenty-Four Eyes decorating one of the classroom walls, and a chalk drawing of Miss Pebble and 12 students adorning a blackboard.
Rather than be entirely a shrine to fictional characters though, there also is ample evidence that teaching really did take place inside of this old schoolhouse -- with such as books, maps, an abacus and other teaching aids to be found in the classrooms.  In addition, it's also lovely to see art by actual former students who spent time in the building still up on the walls.
More than incidentally, I find rather amusing that when I visited the Kagawa Museum the day before I went to Shodoshima, I came across a reconstructed model of the Branch School on the Cape in its History Gallery.  So, in just a little over 24 hours, I had stepped in the actual Tanoura Branch School building, a reconstruction of it for a movie and another reconstruction, this one located inside the prefectural museum!  Even funnier is that the museum reconstruction included a view of the sea from its windows that it shares with the movie set rather than the real old schoolhouse -- because you can't see the sea from the old schoolhouse (at least not when I visited, anyway)!
Posted by YTSL at 11:50 PM

A movie never heard of one. But sure sound like a wonderful place. We have movies in park, in the summer. You bring your own blanket and some pop corn and lay on the grass and watch a movie.

"Twenty-Four Eyes" is a great movie. Try to see it if you ever get the chance. And yes, the Tonoura Branch School is a cool place; and ditto with the "Twenty-Four Eyes Movie Village". :)

They've tried showing movies outdoors in Hong Kong in the summer. It's not something I'm into though as we have to contend with mosquitoes and other bugs then! ;S