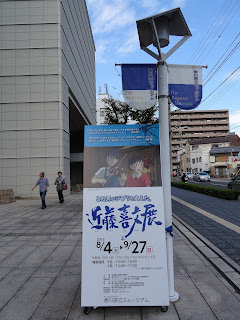 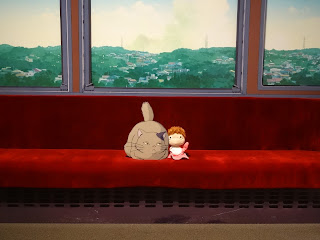 Puppet Ponyo poses with Whisper of the Heart's
Muta on the seat of a train carriage... 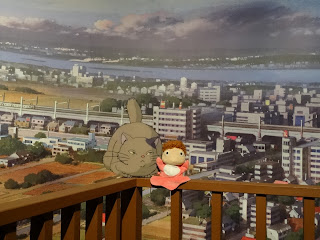 ...and on a balcony railing overlooking
a pretty liveable looking Japanese city :)

After the excitement I had on the morning of the third day of my recent Japan trip, I thought it'd be best to take it easy and spend the bulk of the day in bed.  Sadly, this meant giving up a trip I had wanted to make to Naoshima to check out its art installations.  Still, my day didn't end up entirely art-less since I did feel able after a few hours' rest to drag myself (technicolor swollen toe and all) to the Kagawa Museum to check out an art exhibition dedicated to Yoshifumi Kondo that happened to be on when I was in town (along with the permanent exhibitions at this combination history and art museological establishment).
An animator who was very highly regarded by Studio Ghibli's Hayao Miyazaki and Isao Takahata, and tipped to be their successor, Kondo sadly passed away in 1998 when he was just 47 years of age.  Having had only one feature film directorial credit to his name, it only was to be expected that that particular Studio Ghibli production, 1995's Whisper of the Heart, would be highlighted in the exhibition.
At the same time, Kondo's work on others of the studio's productions, including Takahata's Grave of the Fireflies (on which he served as animation director and character designer) and Miyazaki's Kiki's Delivery Service (for which he was supervising animator), are not forgotten.  And neither were Kondo's pre-Studio Ghibli TV work and short films, many of whose charm shone through in the character design and other illustrations, rough sketches and video clips on show.
While the late animator's Studio Ghibli work is, of course, what I'm most familiar with, I found myself being most captivated by a short video clip from Little Nemo: Adventures in Slumberland, a Japanese-American co-production with English speaking characters that I watched three times before being able to tear myself from its presence!  In addition, there were a series of images of festive times, with happy people depicted flying kites and the like, which I could easily imagine as stills from a, as it turned out, never completed Studio Ghibli production but also work wonderfully as stand-alone works of art.
As with the Studio Ghibli special exhibition at the Hong Kong Heritage Museum last year, photography wasn't allowed in the exhibit areas proper.  But, as compensation, there were sections related to the exhibition where photography was allowed.  Fittingly, the ones at this Yoshifumi Kondo special exhibition were Whisper of the Heart-themed; and I do reckon that Puppet Ponyo looked at home and pretty good pictured in that Studio Ghibli-created environment! ;b
Posted by YTSL at 10:04 PM

This museum entry is a pleasant interlude between your excellent shrine and garden blogs...The photo of Puppet Ponyo with Muta would make a great publicity still for an anime feature.

Thanks for the link to the Little Nemo segment. I ended up replaying it several times and the Wagnerian overture on the soundtrack enhanced the exhilaration of watching this memorable clip!

Are you saying I should visit more museums rather than just shrines and gardens in Japan? ;)

In any case, you're welcome re the Little Nemo segment link. Hope that Youtube video will be (allowed to be) up for a while. :)