Blogging about Twitter and what it's come to mean to me 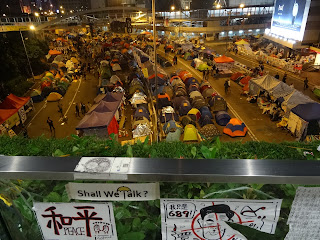 Eight years ago today at Occupy Admiralty
Twitter has been in tumult pretty much since Elon Musk's first day as its owner.  But fears of a Twitter breakdown/shutdown reached new heights today, with tons of Twitter users Tweeting their goodbyes on the platform -- not because they are leaving it but because they genuinely believe that it will cease to exist within the next 24 hours!
Unlike the first wave of departures in the wake of Elon Musk's first day as the self-proclaimed "Chief Twit", the people saying their goodbyes today have a genuine love of Twitter and are mourning what they see as its inevitable death.  At the same time, there are others who refuse to give up hope still.  People like behavioral scientist Caroline Orr Bueno, who Tweeted that: "I’m not throwing in the towel yet. As long as I can tweet, I’ll be here. And I hope you guys will stick around, too. The best way to destroy this site is to start behaving as if it’s already dead. Clearly, it’s not. And until it flatlines, it’s still worth trying to save."
Incidentally, Dr Bueno joined Twitter in 2014 -- the same year that I got to realizing that the bird app was a place where I could get really good as well as up to date news pertaining to the Umbrella Movement, which began back on September 28th, 2014, after the Hong Kong police fired tear gas into a crowd of protestors.  And in 2019, after the anti-extradition bill protests -- the first of which I took part in on April 28th -- got going, I returned to checking Twitter for unedited reports from trusted journalists and other sources who often were Tweeting right at the scene.
Even after the streets became quiet in 2020 (thanks in part to the Wuhan coronavirus along with China imposing a draconian national security law on Hong Kong), Twitter continued to be abuzz with pro-democracy chatter.  And as social distancing became a thing thanks to the pandemic and I spent less and less time with other people and more and more time at home, Twitter helped me to feel less alone; this particularly after I finally stopped just reading Tweets and producing Tweets of my one from August of last year.
One of the reasons I decided to start Tweeting was that I had a question for somebody on Twitter, and figured that it'd be worth going on and seeing if I'd be able to directly get an answer from them there.  That indeed turned out to be the case.  And one of the great pleasures of the "bird app" has indeed been my able to interact with a number of people there that I don't have much chance of doing so anywhere else.
More than incidentally, thanks to Twitter, I'm now in contact with -- "Following" and also being "Followed", in a good number of cases! -- a number of the people whose Tweets had informed and educated me back in 2014 and again in 2019 (people like lawyer-activist Kevin Yam, history professor Jeppe Mulich and journalist Rachel Cheung).  I'm also "Followed" by (as well as, of course, "Following") on Twitter by people whose work and deeds I respect: including pro-democracy politicians, human rights activists, and the likes of lawyer-activist Samuel Bickett, journalist-author Louisa Lim, journalist-author Karen Cheung, and the co-difrectors of Memories to Choke On, Drinks to Wash Them Down!
A second reason I had for finally decloaking on Twitter in August of last year was that a favourite voice on it (who went by the handle HK Wuliff) suddenly left it.  Her action came in the wake of a number of other Hong Kongers who had been very active in 2019-2020 deciding to shut down their Twitter accounts for security and/or "burn out" reasons.  As Hong Kong (pro-democracy) voices decreased on the platform, I got to thinking that I should give back to the movement by adding my voice on Twitter -- and also go ahead and thank those whose voices I had benefited from "hearing" there while I still could.
On a lighter note: a third reason for my using Twitter is that my hero, Funassyi, is on it too!  For some time now, it's been a ritual of sorts for me to read its Tweet before I call it a night.  (The Pear usually Tweets in the evenings, with it being a rare day indeed that it doesn't Tweet at least once!)  And while Funassyi is not Following me, it's actually "liked" two of my Tweets already.  And yes, of course I got a real thrill from this happening; and yes, of course I am one of its 1.3 million Twitter Followers!
Incidentally, unlike the more pessimistic Twitter users, the famously Pollyanna-ish Pear has been carrying on as usual on the bird app today -- sharing cute photos, making announcements of upcoming public appearances (which include yet another stint as a member of the Chiba Jets, its hometown professional basketball team), and posting good wishes for tomorrow.  I'd like to share Funassyi's faith, and be able to keep seeing Funassyi Tweets for a long time to come.  Ah well.  As the saying -- one that I heard a lot back in 2019 -- goes: Expect the worst but hope for the best!   This about Hong Kong, life in general and now, Twitter too!
Posted by YTSL at 11:59 PM