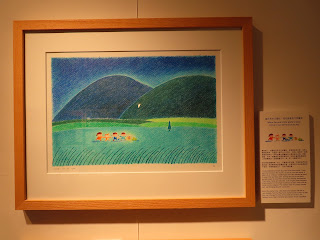 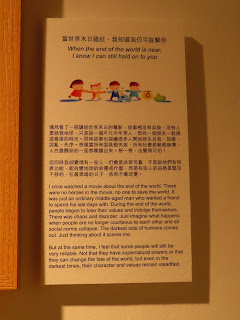 The label for the above work at the exhibition
of theirs that I went to recently
A lot of things have happened in Hong Kong recently.  But rather than write about them, here's pointing out that they've been covered pretty well by the likes of the fellow behind the Big Lychee blog  (See in particular yesterday's and today's entries).  And if you're wondering: I'm not planning to end this blog any time soon but I'm going to take a breather because the last few days have seen me getting news about a number of friends that have made me focus more on personal matters than normal.

A quick recap: The first post I saw when I got onto Facebook on Saturday morning was that of a friend announcing the death of her mother.  The news was not unexpected as I've known for a while that her mother was dying of cancer.  But I knew my friend was hurting all the same from the news; this since the last time we met up, she couldn't help crying when telling me about her hospital visits to see her mother.
Over the weekend, I also learnt from another friend that she recently had to have breast surgery after the cancer she has spread there.  In addition, I learnt from a third friend that her husband is not doing so well and could feel her worry even though we live thousands of miles apart.  And then late on Sunday night came shock news that a dear friend -- who I've not seen for over three years thanks to his never ever having set foot in Hong Kong, and Covid and Covid regulations making me loath to leave Hong Kong (even only temporarily) all this time -- had died of a heart attack.
Oh, and today is the death anniversary of Alex Chow Tsz-lok, whose passing on November 8th, 2019, sent much of Hong Kong into deep mourning.  As German journalist Jeanne Plaumann Tweeted today: "Something changed when Alex Chow Tsz-Lok died on Nov 8, 2019. Riot police, teargas laced with chemicals & pepperballs flying our way. The siege of PolyTech. The last big attempt to secure a free, democratic life. I will always remember the brave people of #HongKong. #FreeHK".
I know that, as per the title of the All Things Bright and Beautiful exhibition I went to recently: We're All Going To Die Some Day.  But there are some people you hope could live longer than in fact turned out to be the case, you know?  (This generally with regards to those who died young -- like Alex Chow Tsz-lok, who was only 22 years of age when he died -- but also some older folks, particularly if they were still sound in mind and seemingly so in body.)
With regards to my friend who passed away this past weekend: he was an incredibly lovely man.  The person I think of when one talks about "gentlemen".  And two days on after hearing the news of his death, I still can't help shedding tears when talking about him -- as was the case this afternoon -- with my mother.
After hearing about his death, yet another friend contacted me.  Like the friend who passed away, he's several years older than me -- and he shared that he's got 10 friends on Facebook who are now dead.  I replied that I now have three and that's already pretty painful.  "Brace yourself for what's to come," he told me.  I will try, even while knowing it will not be easy
Maybe the thing to do is to focus on the positive memories one has of one's friends.  I know that has helped with regards to dealing with the death of my friend who passed away this past Sunday.  A certain wise Pear Fairy has said that "To live is to make memories".  I vow to keep making memories but also treasure the good ones already made with good friends and other loved ones.
Posted by YTSL at 11:29 PM