Ekin Cheng and Co deliver entertainment, and the message that Life Must Go On (Film review) 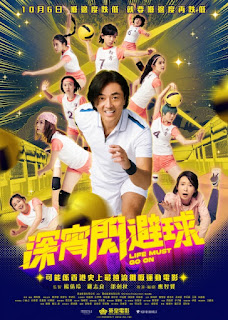 One of the cheeriest looking movie posters
you'll ever see?! :D
Life Must Go On (Hong Kong, 2022)
- Ying Chi-wen, director and co-scriptwriter (with Wong Chi-yeung)
- Starring; Ekin Cheng, Catherine Chau, Chin Kar Lok
Thanks to his starring role in the Young and Dangerous series (which included a prequel and five official sequels, and was so successful it spawned spin-offs like Portland Street Blues and similarly themed movies like Sexy and Dangerous), Ekin Cheng was one of the biggest stars of mid to late 1990s Hong Kong cinema.  But unlike the (older) likes of Tony Leung Chiu-wai and Andy Lau, who continue to be big office draws, Ekin Cheng no longer headlines blockbuster movies.
Not only that but having him as its star does not guarantee a movie a theatrical release.  A case in point re the latter: the previous film that I saw him in, The Dishwasher Squad, has yet to have a commercial run despite it having been favorably received by by the audience at the Hong Kong Asian Film Festival screening of it that I attended last year.  But even though it's like that 2021 offering in having a debutant director at the helm and coming across as a rather modestly ambitious effort, Ying Chi-wen's Life Must Go On was released in cinemas -- and continues to play in them more than one month on from its opening date.
Life Must Go On's story begins with a social worker, named Yanki (played by Catherine Chau) whose pet project is a "midnight gym" for wayward teens.  When her boss (essayed by 29+1's Kearen Pang) threatens to defund the program, Yanki puts together a dodgeball team from the not especially sporty young females who treat the "midnight gym" more as a late-night hangout/refuge and enters them into a tournament whose other teams are seriously competitive.
Enter Jones (Ekin Cheng's quirky character) as their coach.  Despite his actually not knowing anything about dodgeball outside of reading about it on Wikipedia!  Something that Yanki had not realized about her former schoolmate, who she had recently reconnected with at a high school reunion at which he regalled his former schoolmates with tales of doing such as running a marathon in Japan, taking part in a cycle race in Taiwan and coaching a sports team in Cambodia.  (Other things that Yanki failed to realize about Jones is that he's far less of a success in life than he tries to make himself out to be.)
With Life Must Go On being an inspirational sports dramedy though, you'd think that you would know how the story will go.  But what with it being a Hong Kong (as opposed to Hollywood) movie, do realise that success is not measured in terms of trophies or even multiple wins for the team, and the focus is much more on personal growth and team bonding!
Suffice to say also that Life Must Go On gives Ekin Cheng plenty of opportunities to show that he can still charm audiences.  And I must say that, without him (who really comes across as an amiable fellow on screen), the movie wouldn't feel so luminous!  For while co-star Catherine Chau performs with credit, I must admit to not connecting much with the young actresses who played the dodgeball team members -- to the point that I am not sure that I'd be able to recognise them when (or if) I next see them in a movie!
Presumably, this movie was conceived by producers Emperor Motion Pictures as a way to introduce a bunch of its latest starlets to audiences as well as be an Ekin Cheng star vehicle.  But, truly, it was the movie's older performers who impressed; with Chin Kar Lok and Joyce Cheng, in particular, making the most of their guest starring roles -- as an old athletics team-mate of Jones turned rival dodgeball team coach and frustrated sister-in-law respectively.
Put another way: the veterans showed that there's much life in them still as well as that life does indeed go on!  And, in the process, they helped Life Must Go On to entertain as well as deliver meaningful messages (about, say, how one shouldn't give up, and, also, how one sometimes needs to temporarily retreat in order to progress) that should resonate with -- and, in so doing, help provide comfort to -- its contemporary Hong Kong target audience.
My rating for the film: 6.5
Posted by YTSL at 11:23 PM