A Glory to Hong Kong-March of the Volunteers mix-up in Seoul has sent Hong Kong into hysterics! :D 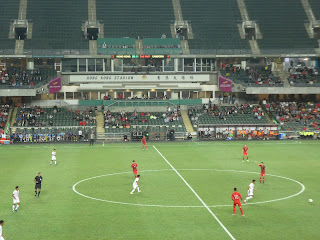 The most recent time I've heard the Chinese national anthem
being played: at a football match between Hong Kong
and Cambodia close to three years ago now!
A woman was sentenced in a Hong Kong court last Thursday to three months imprisonment for "insulting" the Chinese national anthem -- the first conviction under a law which came into effect on June 4th, 2020 in response to "The March of the Volunteers" having regularly attracted boos from attendees of such as football matches involving the Hong Kong national team.  Citizen journalist Paula Leung was seen waving the British colonial-era Hong Kong flag while "The March of the Volunteers" was being played at a Tokyo Olympics medal ceremony being broadcast live at a mall after fencer Cheung Ka-long won a gold medal for Hong Kong.  That's it.
And if you thought that the Hong Kong government had made a mountain out of a molehill in that case, you ain't seen nothing yet.  For a major hoo-ha has erupted in the wake of "Glory to Hong Kong" being played in place of the Chinese national anthem at the final of a rugby sevens competition in Seoul, South Korea (which Hong Kong won, by the way)!
More specifically, the Hong Kong government appears besides itself with rage and pro-Beijingers appear to be frothing at the mouth while the rest of Hong Kong have been left in hysterics -- both at hearing the 2019 protest anthem being played at an international sporting event and seeing the stoic (blank?) expressions of the players representing Hong Kong at it on a widely disseminated video clip, and also at the Streisand effect that has once again been created by the authorities' irate protests!
Consider this: Executive Councillor Ronny Tong "refused to accept it’s a careless mistake, saying anyone involved may violate [the] sedition law or [national security law]."  This despite it being entirely possible that the junior staffer tasked with getting a copy of the Hong Kong national anthem did not realise that: Hong Kong doesn't have its own national anthem (despite having such as its own national rugby team, Olympic teams, etc.); that the Chinese national anthem also serves as the Hong Kong (national) anthem; and that "Glory to Hong Kong" may be an anthem from Hong Kong but is not the official Hong Kong (national) anthem!
We've also got pro-Beijing legislative councillor Starry Lee laughably stating that the rugby tournament's organizers, Asian Rugby, " should apologise to the entire Chinese population and guarantee that it will absolutely never happen again"!  And then we have her fellow pro-Beijing legislative councillor, Junius Ho, stating that "he has lost faith in players for showing no reaction when the protest song was played. “The only way out now is to disband the Hong Kong rugby team!” Ho wrote on his Facebook"!
I have to admit: Junius Ho's comments really did cause me to scoff because it was only two weekends ago that the Hong Kong rugby team played in the same Hong Kong Rugby Sevens that was a major exercise in sportswashing; thanks in no small part to it allowing John Lee and Co to prance around unmasked in Hong Kong Stadium and playing a role in delivering the government's "Hong Kong is back" message.
And in case people didn't realize it: Rugby isn't exactly a popular Hong Kong sport -- with the Rugby Sevens generally being associated more with foreigners and expatriates rather than locals, and the Hong Kong rugby team tending to be less ethnic Chinese than, say, the Hong Kong football, cycling, badminton and table tennis teams.  So more than one person has been moved to wonder whether the majority of the Hong Kong rugby national team players actually recognized that "Glory to Hong Kong" was being played (rather than "The March of the Volunteers") in Seoul, never mind cared at the time!
On a personal note: I have to admit that it took me a while myself to realize that Hong Kong didn't have its own anthem (since there is a Hong Kong flag, a designated Hong Kong flower and such).  And since I actually have only heard "The March of the Volunteers" played a handful of times in Hong Kong, it's not a song I'm all that super familiar with!
I still recall the time I was at a Hong Kong Philharmic Orchestra concert some years back when the orchestra started playing a piece that most definitely didn't sound like the kind of classical music work that I was expecting to hear from them.  Even more bewildering to me was that some -- but not all -- members of the audience stood up when it was being played.  Truly, it took me a while to realize that the orchestra had elected to play "The March of the Volunteers" on that occasion because the concert took place near October 1st.  And yes, after that, I stopped attending any concerts that took place close to that date; hence my not hearing the national anthem being played at any concert since!
Posted by YTSL at 11:59 PM