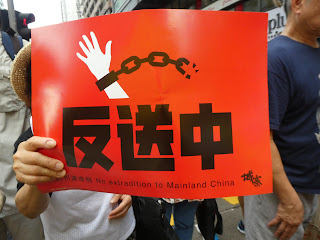 The message is clear 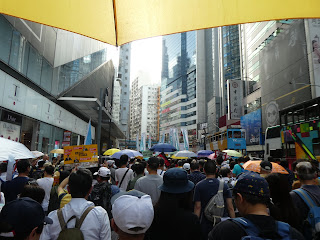 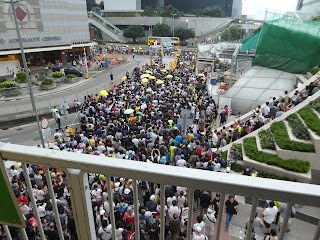 A crowd that still believes (for now)
in the power of peaceful protest
While making my way to Admiralty after attending a Hong Kong International Film Festival screening last month (of, as it so happens, a documentary about Russian dictator Vladimir Putin), I caught sight of a protest march wending its way along Queensway towards Tim Mei Avenue.  It was only then that I realized that a protest had been called that day against an amendment to Hong Kong's extradition laws that would allow for people to be sent to Mainland China for trial there.
Earlier today, I took part in another protest march against that China extradition plan which puts far more people at risk than anyone should be comfortable with.  This one attracted a far greater number of participants than last month's -- thanks in no small part, I believe, to it having been far better publicized.  Another development that undoubtedly contributed to people feeling a greater impetus to join today's event involved the outcome of the trial of the Umbrella Nine.  In addition, I believe that the urgency and seriousness of this matter got further driven home by the decision of Hong Kong bookseller Lam Wing Kee, who had taken part in last month's protest march, to seek refuge in Taiwan earlier this week.
As has become the norm, there's a vast discrepancy in the size estimates of the crowd made by the police (of some 22,000) versus that of the organizers (over 130,000).  What I think can be safely agreed upon though is that far more people turned up to peacefully but determinedly be seen and make their voices heard than had been anticipated -- to the extent that the need was felt to get the protest march going some 20 minutes earlier ahead of the official start time of 4pm in order to prevent the area where the event began from being brought to a complete standstill.
With more people (many of them bearing yellow umbrellas and protesting in other distinctively Hong Kong ways, including by humming aloud Les Misérables' "Do You Hear the People Sing?") filling the allocated spaces along the march route than expected, movement was on the slow side for the most part -- to the extent that, having arrived at the assembly point minutes before the march got going, it took me close to two hours to walk from East Point Road in Causeway Bay to the section of Hennessy Road by the Southorn Playground in Wan Chai.  And while I made it to the end of the route in front of the Legislative Council building in Admiralty at some two hours and forty minutes after I had set off on the route, a friend of mine further back in the long, snaking procession reported that he was still only at the section of the route near Southorn Playground!
More than incidentally, I think it worth pointing out that that same friend -- who only reached the end point of today's protest march at around 7pm, more than four hours after he had arrived at its starting point -- lives in Tin Shui Wai, over in the northwestern New Territories, while another friend who managed to catch up with me about two thirds along the route hails from the other side of Hong Kong over in Tseung Kwan O.  Put another way: it wasn't just that there were a lot of protesters out on the streets of Causeway Bay, Wan Chai and Admiralty today but also that they look to have come from all over Hong Kong and thus could be said to constitute, in more ways than one, a good representation of the population of the territory.
Posted by YTSL at 11:41 PM