On the final day that entrance to M+ was free for Hong Kong residents, I spent a few hours at the museum of visual culture whose opening many people (including myself) had looked forward to for years, only to feel not so enthused about it when it finally did so -- thanks to China imposing a national security law on Hong Kong and censorship (of films and undoubtedly of other arts too) having become a thing in this territory where free speech used to be taken for granted.  On my first visit to the museum a few weeks earlier, I had gone through the Hong Kong: Here and Beyond exhibition and the galleries devoted to the M+ Sigg Collection.
I also had quickly gone through rooms devoted to other exhibitions that made me realize that I needed another visit to better appreciated them.  Thus it was that did so on this second visit -- during which I also enjoyed taking in the Golden Hour and after dark views from M+'s 3rd floor roof garden, and a (sneak) peek at sections of the Yayoi Kusama exhibition (which opened on November 12th and would cost one HK$240 to officially check out!).
More than incidentally, it seemed like the museum had more visitors on its final free day than when I previously visited.  There also were a good number of people there taking selfies in its galleries and, also, a few people who looked to view the museum primarily as a setting for them to take photos of their companions, some of whom were posing away like professionals!  Fortunately, it still wasn't TOO packed though; and I found that if I waited just a few seconds, most of the time, I'd end up with clear shots of the art work -- though, in some cases, it was actually amusing to have people in the frame of them too! ;b 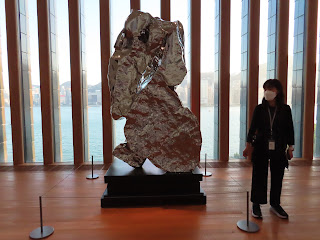 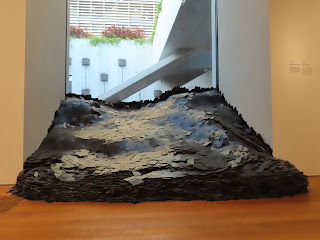 Malaysian artist Heman Chong's Monument to the people
we've conveniently forgot (I hate you) -- which is
made up of 1 million pitch black business cards! 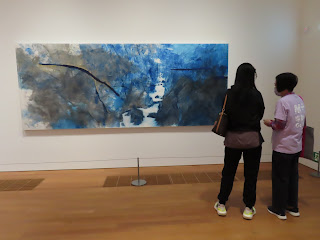 Palimpset, by Wang Gongyi (who is listed as working in
both Portland and Hangzhou), and two admirers 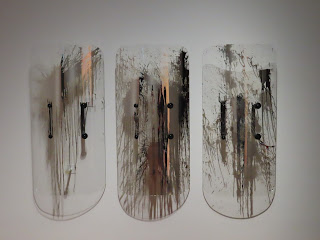 Michael Joo's Untitled (5.1.14)'s sculptures bring to mind
police riot shields that bear the scars of clashes with protestors
-- and evoked visceral reactions from more than one M+ visitor 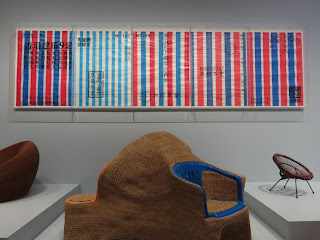 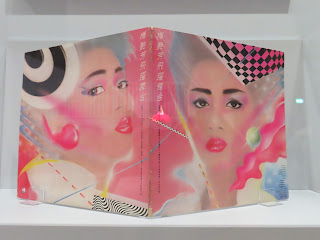 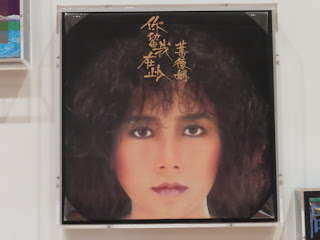 Tina Lui's album cover for Deanie Ip: You Left Me Here
-- showing Deanie Ip as I've never seen her before! 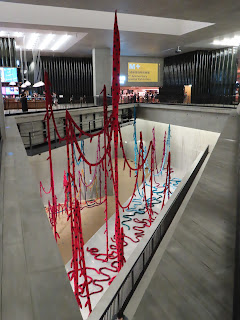 Yayoi Kusama's Death of Nerves does look pretty awesome--
but I'm still leaning against paying HK$240 to see any art exhibition! ;(
Posted by YTSL at 11:51 PM