Bidding yet another friend farewell on the same day as an article in The Guardian asks "Why would you move to Hong Kong?" 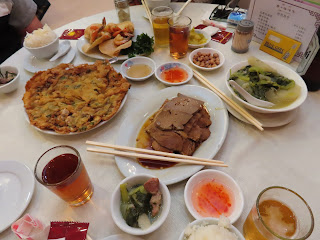 Chiu Chow fare for a farewell dinner this evening
I went to yet another farewell dinner of a friend this evening. This particular friend is originally from the US but moved to Hong Kong before I did. I still remember his happy (ecstatic even) emails from his first months here, which made me so very envious that he had fulfilled his dream to move to Hong Kong to live.
When I finally came over to Hong Kong myself, I already had four friends living here. The first one to leave did so long before 2019.  As I've previously stated: I've long thought of Hong Kong as a transient place; with my having had a friend leave every year that I've been here.  (The first to leave was a friend from English boarding school who had lived here for decades but -- entirely coincidentally; it's not my fault! -- decided to leave weeks after I finally moved here!)
The friend whose farewell dinner was this evening is the second of the four to announce he's going to do so.  And, in a move that came as a shock, another of that quartet -- one who had told me only a few months ago that he had no plans to leave whatsoever -- told me he's leaving the city he moved to as a child (after his father got a job here) and has spent the vast majority of his life early next year!
Some information about my friends, which will give an idea of the kind of people who love(d) Hong Kong but found that it was not a good place for them (and, in the case of one, their child) to live after all: one is a British-born (ethnic) Chinese who studied at Winchester College and Cambridge University; another is a Ph.D.; the third is yet another university graduate; and two of them have Hong Kong-born spouses.  Put another way: they are the kind of people who one would expect to be viewed as being able to positively contribute to society -- and a goverment that has vowed to "trawl the world for talent" might actually target (to come here, as opposed to throw in jail).
Speaking of that vow: it really doesn't look like getting talent to move to Hong Kong might be pretty difficult these days.  To wit: an article appeared on the main page of The Guardian's website with the following question as its title: “Why would you move to Hong Kong?”  And this is how its first four paragraphs reads:

Raleigh Chuang’s decision to move to Hong Kong from London in 2021 bemused her friends. She was offered a position at an international bank that required the relocation.

“Why would you move to Hong Kong?” her friends asked, well aware of the political and social upheaval that has gripped the city in recent years.

Hong Kong has seen an exodus of workers since a national security law was introduced in 2020. The erosion of social and political freedoms, due to the security crackdown and tighter digital surveillance that began during Covid-19 pandemic, have coincided with the city’s workforce shrinking by about 140,000 people in the past two years.

More than 10,000 have been arrested for participating in the 2019 pro-democracy protests and some activists have waited for nearly two years for trial without bail. Over the past two years, press freedom has been drastically reduced.

Some other damning facts listed in the article: "Hong Kong’s population has fallen from 7.52 million at the end of 2019, to 7.29 million in mid-2022, according to census data. The number of people aged 20-29 has shrunk from 11.8% of the city’s population in 2019, to 9.9% 2022. More than 130,000 Hongkongers moved to the UK in the first 18 months after the government opened a special visa scheme in January 2021."
The 27-year-old Chuang, who "has heritage from both Taiwan and Hong Kong, says she was not convinced by the international media’s portrayal of Hong Kong, which has at times pitched it as a city in decline. Chuang wanted an unbiased view of the city, saying she enjoys the thrill of being in a controversial place during a controversial time. “Part of my decision to move to Hong Kong is paradoxically fuelled by the current, unprecedented situation the city is in,” she says. “There must be a grey zone amidst all this and I wanted to see for myself.”"
I found myself in two minds when reading about Chuang.  Part of me wondered if she's overly naive; another part is tempted to agree with her assessment that "there must be a grey zone" though.  But even the latter part of me wonders for how long the "grey zone" will remain (even while, of course, hoping that it will do so for far longer than many expect and have predicted).
The Guardian piece goes on to report about others for whom Hong Kong still offers more opportunities and freedom than their home territory: specifically, Mainland China.  The two people from Mainland China interviewed in the piece are: a university student who is part of the LGBT community; and a journalist who studied here and now works here.
Another country that I could imagine some people feeling that they would have more opportunities and freedom in Hong Kong than at home is Malaysia.  And this particularly if the fundamental Muslim dominated, ethno-nationalistic Perikatan Nasional had ended up heading the government in the wake of the General Election on Saturday.
But, as it so happens, it's turned out not to be the case -- with Anwar Ibrahim being announced as the new prime minister of Malaysia earlier today and calming the fears of Malaysia's significant ethnic minority (which includes ethnic Chinese) by declaring that no Malaysian will be marginalised under his watch!  So I'm thinking Hong Kong will (continue to) be a "hard sell" for much of the world beyond Mainland China, if even that for all that many Mainland Chinese denizens who have the equivalent academic and professional qualifications to my friends who are leaving or have already left!
Posted by YTSL at 11:59 PM