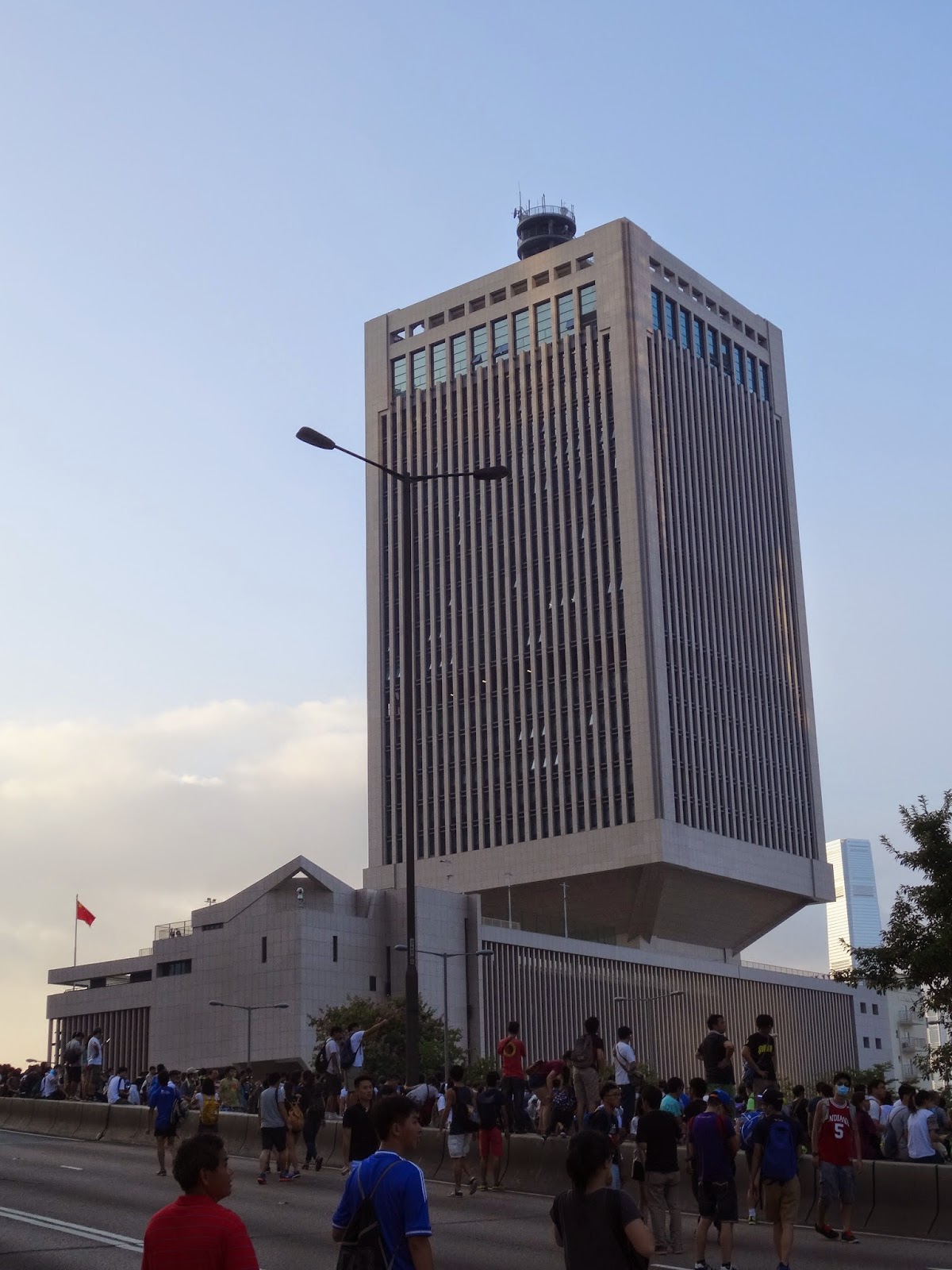 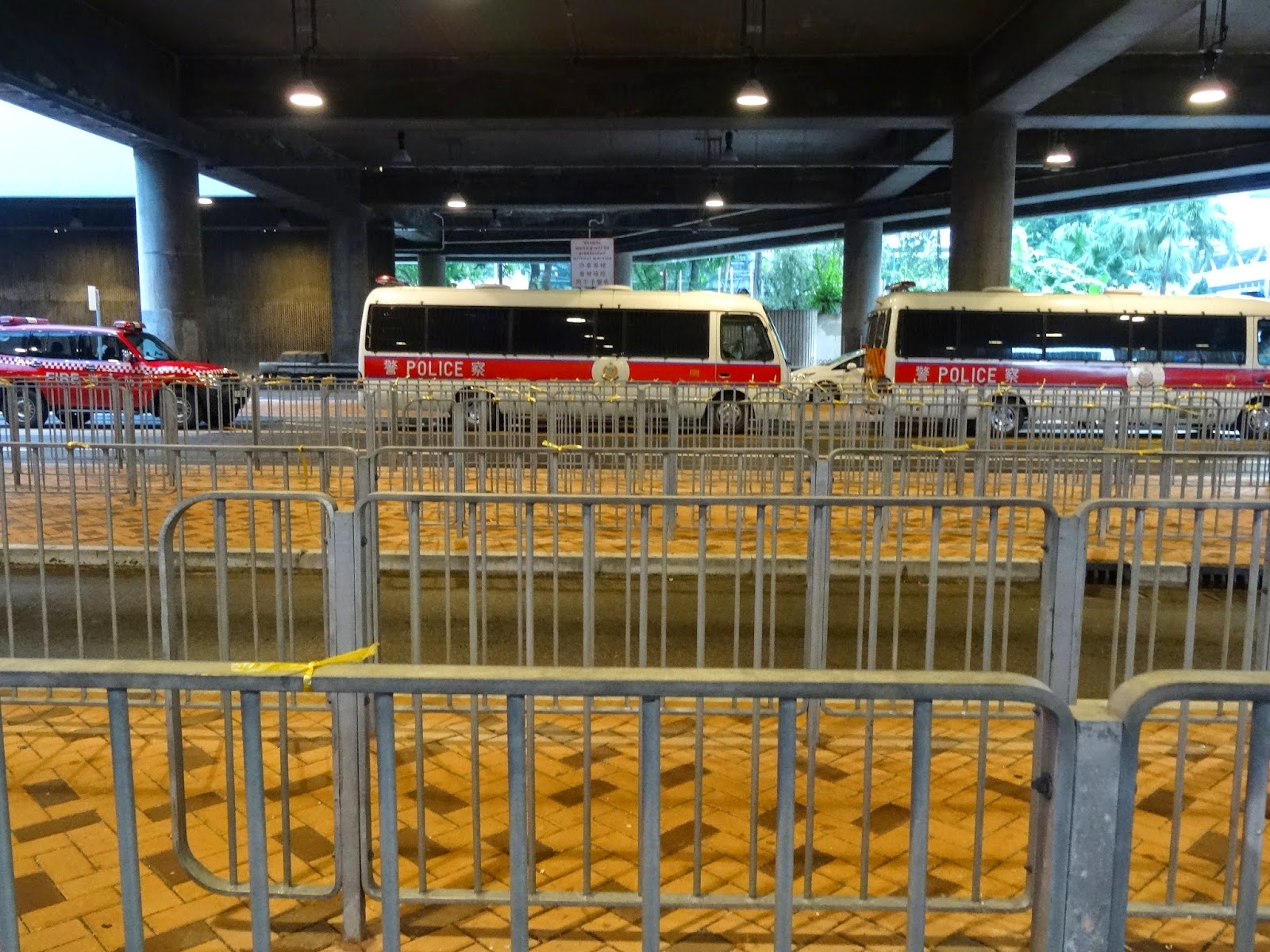 The surreal and already tense calm before the storm --
with police and fire services vehicles parked in Admiralty, and
yellow ribbons symbolizing democratic hopes tied to railings

For much of this week, I've been having the time of my life travelling around Japan once more, enjoying hikes and a circa 17 kilometer bicycle ride as well as paying visits to such as a castle on a hill, an art museum and a number of old temples, and -- of course -- consuming great food and eminently quaffable drinks.  Truly, this most recent Japan vacation (which I do intend to write about at some point in the near future, if only to help me recapture some of that bliss) was one that was super wonderfully destressing.


And then I flew back to Hong Kong -- only it's a Hong Kong which reportedly one in five people would like to leave, and one that is more violent and troubled than it's been in a long while, with the police having not only used pepper spray but also tear gas on unarmed protestors in the past 12 hours or so.

Believe it or not, on the bus from the airport back to my apartment earlier today, I didn't see much that looked all that disturbing.  In fact, like I told a couple of friends, I saw more Filipina maids as well as police out in Central on that bus ride than I saw protestors!

But at Admiralty (particularly in the vicinity of Tamar) later in the afternoon, it was clear that there was a sizable number of people - and not just of student age either -- there to show their disatisfaction with the turn of events that have led many Hong Kongers to worry that Hong Kong is well on its way to being made into just another Chinese city.  And my sense was that the general mood was palpably angrier and likely to end in violence, tears and/or worse than when I've been in the crowd at Victoria Park on June 4 or out on the streets on July 1.


At the same time though, there was some strains amidst the turmoil of that almost festive air that sometimes can be discerned on July 1.  And if that was not weird enough, this was further mixed with a sense of the surreal and farcical that comes from there seeming to be so many other people nearby who didn't know what was going on, didn't care, or both -- people doing stuff such as going about shopping at the nearby high end Pacific Place mall, drinking in a bar located inside it, heading into the cinema there to catch a movie, etc.!

Perhaps the strangest -- and definitely the most upsetting -- thing for me is to see how the Hong Kong police have over-reacted to the assembled protestors.  The force that likes to think it's Asia's finest has tarnished its reputation and lost a huge amount of goodwill on this day.  Please don't let them follow the example of the PLA in the summer of 1989 -- because, then, hope as well as innocent people surely will die.
Posted by YTSL at 10:51 PM

My heart is with all Hong Kongers right now. I've been following the news about what happened this weekend. Although I'm not surprised by the police reaction, it's still gut-wrenching to see the photos and videos. I hope that nobody is killed or seriously injured but also hope that these events become a unifying -- and not dividing -- catalyst for full democratic reform.

You're in the minority for being unsuprised by the police reaction: honestly, I believe it was the shock at the police over-reaction that has prompted a lot of people to go out and protest on the streets of Hong Kong in the past 24 hours or so!

I too hope that nobody will be killed or seriously injured. Think full democratic reform may be a pipe dream -- but hell, the reactions of people in the past 24 hours or so have indeeded exceeded expectations! (Occupy Central? Nobody expected Causeway Bay, Mongkok and Tsim Sha Tsui to be "occupied" too!)

The last time I have visited Hong Kong ( 5 - 6 years ago?? not sure) it became clear to me that Hong Kong has become a Chinese city. I won't be able to point out exactly what have caused this understanding. It was how I felt as I wandered the around the city I have come to know well (this was my 6th visit) and sadly I knew that I wouldn't be as eager to go there again as I used to be.

I feel for the Hong Kongers since my country is going through some changes too and the majority unfortunately is OK with the changes even though a heft minority is agains them. There have been protest earlier in the year (against just one of the many implementations of the government) and we have experienced heavy police interference with what essentially was a peaceful protest - given the nature of Turkish people it didn't last long for it to turn violent.

Umbrellas will not be very effective if the police stops being so gentle, so I suggest gas masks and always to keep milk and lemon nearby to clean the eyes.

Thanks for commenting but sorry, I disagree with you. Hong Kong has NOT become another Chinese city. If it had, I would not have happily lived here for 7 years now -- and care so much for Hong Kong.