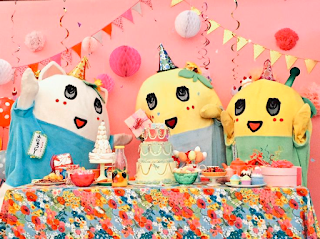 Happy birthday, Funassyi!  Can you believe that the Pear (Fairy) is 1,884 years old today?  I must say that it's hard to believe this for reasons including Funassyi being so energetic still!  Something easier to accept: that Funassyi's been on Earth for 10 years now: as in, according to Pear-lore, Funassyi decided to come down to the human world some 10 years ago to try to cheer people -- especially those negatively affected by the Great Tohoku Earthquake (plus attendant tsunami and nuclear disaster) -- up and make them happy.

Tributes to Funassyi on its 1,884 birthday include this cute video from Japan's B League (featuring area basketball team, the Chiba Jets) and a challenge issued on Twitter to people to try to spot Funassyi in it!  In honor of its 10 years on Earth, there's also such as a Funassy-themed exhibition being held in the Pear's hometown of Funabashi  -- whose official opening was graced by the mayor of Funabashi  as well as a special Funassyi train operating in the area, not to mention the production of Funassy-themed ice cream -- in time for crazy hot summer days -- and drinks (specifically, a nasshi (pear) shake)!

Note: this all is on top of more "usual" Funassyi themed promotions such a new collaboration with footwear makers Belluna and whatever new products are to be found at Funassyiland.  Speaking of which: I really, really, really miss not only not visiting Japan in general but, also, a Funassyiland.  In fact, my most recent trips to Japan (the last of them made in 2019 -- i.e., pre-pandemic times) all involved a visit to a branch of Funassyiland, be it the one in Osaka, Nagoya, Tokyo or Funabashi itself!

But while I've not been able to purchase new items at a Funassyiland over the past three years or so, I've actually been able to get my hands on Funassy merchandise nonetheless.  For one thing, while Funassyi items are thin on the ground in Hong Kong, I have come across them every now and again in certain stores and malls.  For another, I've been gifted Funassyi items by friends as well as have been able to count on friends living in Japan to send me certain Funassyi items I consider to be "must have"s (i.e., the annual calendars, thus by ensuring that I have a smiley face to look and beam at next to my computer for a number of years now).

Here's the thing: Funassyi's face really is one that I love looking at and almost always is able to get me smiling back at it.  I also love its voice and its actions.  So rest assured that if I ever get the chance again to attend a Funassyi event (including Charamel concert), I'd readily do so!  And yes, when I get the chance to visit Japan again, one of the places I really want to go to would be Funassyi Park -- it being targetted primarily for children be damned! :D

Happy Birthday Pear.
Coffee is on and stay safe

Thank you for the birthday wishes for the Pear! :)