Apple Daily ex-senior staff back in the news again after pleading guilty to doing such as holding editorial meetings! 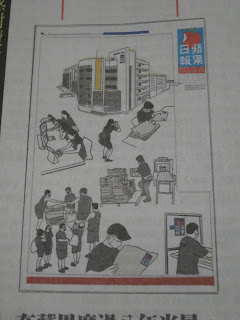 Illustrated tribute to Apple Daily staff in
the newspaper's last issue
Today has been one of those days where I've felt battered by bad news.  What's happening in Malaysia is scary to view (even from afar); with the worst yet to come.  Then there's Hong Kong, where blow upon blow has been on our hopes for, and dreams of, freedoms and democracy for too long now.  And while some might think we'd be emotionally numbed to it all by now, that's really not the case; with the latest developments involving those once associated with Apple Daily really tearing at the heart.
To be sure, there had been rumors about how former Next Digital Chief Executive Officer (CEO) Cheung Kim-hung, and Apple Daily’s former editor-in-chief Ryan Law, former associate publisher Chan Pui-man, former executive editor-in-chief Lam Man-chung, ex-editor-in-chief of the English news section Fung Wai-kong, and ex-editorial writer Yeung Ching-kee would plead in court for a while now -- but it still was emotionally devastating to get confirmation today that the six former senior staff members of the pro-democracy tabloid and its parent company, Next Digital, pleaded guilty today to the national security law charge of "collusion with foreign forces to endanger national security" which carries a maximum penalty of life in prison.
As per a Hong Kong Free Press report: "According to the summary of facts read out in court, Apple Daily was used as a platform to publish news or “content purporting to be news articles,” commentary articles, and footages."  Yes, well, I don't think it ever was deniable that it was a newspaper.
The Hong Kong Free Press piece goes on to state that: "The prosecution listed at least 161 items of “impugned content” published since April 1, 2019, which they said had the objective to “sway public opinion” by making seditious statements against the central and Hong Kong governments and calling for the public to participate in protests.  Some articles published also contained requests for “external elements” to “impose sanctions or blockage, or engage in nother hostile activities against the PRC or the HKSAR,” the prosecution’s case read."  Wait, isn't the national security law supposed to be not retroactive?
Three of the accused "were also said have held “planning meetings” on Tuesdays with the other team heads to discuss topics or events to be covered, the prosecution said."  In other words, they held editorial meetings -- as newspaper editors and writers (which five of them were at Apple Daily) normally do.  As lawyer Kevin Yam was moved to Tweet: "How rotten does a system have to be for people to choose to plead guilty to clearly trumped up charges?"
Also, as an observer who goes by the moniker John deFrog on Twitter has noted: "it's worth stressing that "collusion" in [national security law] terms is a legal construct designed to jail the opposition. What [these six former Apple Daily staffers are] copping to is not collusion in any meaningful sense. That's merely how [the Hong Kong government] chooses to interpret "collusion" to justify jailing them."   He goes on to also point this out: "[As far as I know,] the defendants weren't literally conspiring with foreign powers to overthrow China. But that's how [the Hong Kong government] will market this to justify shutting down news orgs, especially re: Jimmy Lai's trial. The guilty pleas are tactical, nothing more. They don't mean [the Hong Kong government] is right."
And yet, the consequences of the guilty pleas are devastating.  If its impact on those who did so isn't already bade enough, consider this: they stand accused of conspiring with Apple Daily founder Jimmy Lai, and three companies linked with the defunct newspaper – Apple Daily Limited, Apple Daily Printing Limited, and AD Internet Limited.  Which means that along with their pleading guilty to the charges against them, some of these former Apple Daily staffers will now be testifying in a separate -- and upcoming -- trial against Jimmy Lai which is set to begin next Thursday, presumably at the prosecutions' behest.
Something that could be read as possibly influencing their testimony: Mitigation submissions and sentencing of the six former Apple Daily and Next Digital senior staffers who pleaded guilty will only be handled after Lai’s trial.  A reminder: "The group has been remanded in custody for over a year since they were first brought to court in June and July last year"; with five of them having been arrested back on June 17th, 2021.  Two things that don't seem like ordinary procedure to me who, admittedly, is not all that familiar with legal proceedings.  (So if someone knows better, they should feel free to correct me about this.)
Posted by YTSL at 11:59 PM

Don't you think there trying to sway our thoughts and such. I would say social media is one the bigger ones.
Coffee is on and stay safe

Who are the "they" you are referring to?