Admirable intransigence on the part of Jimmy Lai against the odds 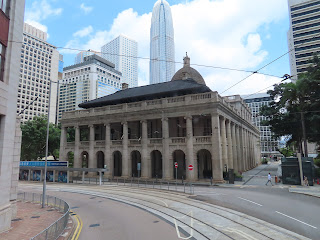 It looks so stately and respectable but what horrible things
have taken place in this building which currently houses the
Court of Final Appeal (but also used to be the Kempeitai Headquarters)
Remember Jimmy Lai? The former media tycoon and owner of Apple Daily has long been the Hong Konger that the Chinese -- not just Hong Kong -- government was said to hate most. So it's not surprising that as a Bloomberg piece from yesterday notes: "Lai has emerged as a key target by authorities in their campaign against dissent following the enactment of the national security law in June 2020. He was among the earliest charged under the law and faces the most number of charges."
I'm sure one of the things that makes them hate him so is that he's not a person who is willing to give up easily.  For instance, he may currently be behind bars (found guilty on some technical charges -- like taking part in "illegal assemblies" on June 4th, 2020 -- and also denied bail while awaiting his national security law trial which has yet to begin, and will be undoubtedly postponed again) but he refuses to roll over and plead guilty.  And in so doing, he exposes that Hong Kong's brand of justice is more lawfare than actual rule of law.
Exhibit A: what happened yesterday with regards to decisions made about his choice for lawyer to represent him in the national security law case. Quoting that Bloomberg piece again: "Hong Kong will ask China’s top legislative body to interpret the city’s national security law to block overseas lawyers from being part of national security trials, the city’s leader said at a press conference Monday.  Chief Executive John Lee’s briefing came hours after Hong Kong’s highest court dismissed an appeal by the government to overturn an earlier court decision allowing a UK lawyer to defend media mogul Jimmy Lai in his upcoming trial."
In footballing terms: we're not just talking about the shifting of the goalposts but, rather, a team deciding that they want to redefine the size and dimensions of the goalposts too! Which, in a proper game of football, would mean the team is absolutely determined to not play fair!
Quoting the Bloomberg report once more: "The Department of Justice sought to ban overseas lawyers from taking part in national security trials apart from exceptional cases, after losing its bid in lower courts to block Timothy Owen KC from representing Lai.  Lai is charged with collusion with foreign forces and sedition in a trial that starts Thursday" -- though, as I wrote above, that date is likely to be changed in light of this latest move by the Hong Kong government.
Note: "This would be the first time the National People’s Congress Standing Committee has offered an interpretation of the national security law, which was passed in 2020 by the committee and endorsed by President Xi Jinping, without public debate or a vote by Hong Kong’s elected legislature."  But also note the following: "The Standing Committee has offered five interpretations of Hong Kong’s Basic Law -- its mini constitution -- since the UK handed the city back in 1997. The last was in 2016, when China’s top legislative body said those who voice separatist views couldn’t hold public office. The ruling effectively blocked two elected “localists” from taking their seats in the Hong Kong’s legislature."
And then there's this: "The central government could allow Lai to be tried on the mainland if Hong Kong can’t successfully implement the national security law as required, Willy Fu, a member of the Chinese Association of Hong Kong and Macau Studies, told Beijing-backed media outlet Ta Kung Pao."  Remember the extradition bill that Carrie Lam proposed in 2019 and caused so much protest in Hong Kong? Remember how vehemently Hong Kongers opposed the idea of people in Hong Kong being sent to Mainland China for trial? Yes, well... !
Why, one might ask, is Jimmy Lai continuing to fight so hard against the Hong Kong government, especially when it could be so detrimental to him personally? And this particularly since, as Bill McGurn stated in a Wall Street Journal entitled "The Innoncence of Jimmy Lai": "There is not a man, woman or child in Hong Kong who doesn’t believe the verdict is already in. The authorities are taking no chances either, having Jimmy tried before three national security judges rather than a jury."

McGurn's believes the following: "Simply put, Jimmy is making what may be his last stand for truth... All he asks is for the world to hold China to its promises. This is precisely the threat to China’s narrative, under which no Chinese could ever desire freedom or protest Beijing on his own. It isn’t unlike what is now being said about the protests on the mainland: It’s all the work of the CIA."  An already, "Jimmy has succeeded in forcing the reality of Hong Kong’s legal system out in the open: Its autonomy is respected only when it does what Beijing wants. Thus has Jimmy helped expose what has become of the rule of law, once Hong Kong’s most precious asset."
Turning his attention to other Hong Kong political prisoners, McGurn suggests that: "we shouldn’t be too hard on those who give in. Jimmy is the first to forgive former friends and associates who have turned on him  Still, this should make us admire all the more those who refuse. And not only Jimmy. There are many others in jail in Hong Kong... who are forcing their jailers to own the lie."  We should not forget them (who include Chow Hang-tung) and, instead, honour them too.
Posted by YTSL at 11:59 PM