The peaceful norm at Occupy Admiralty 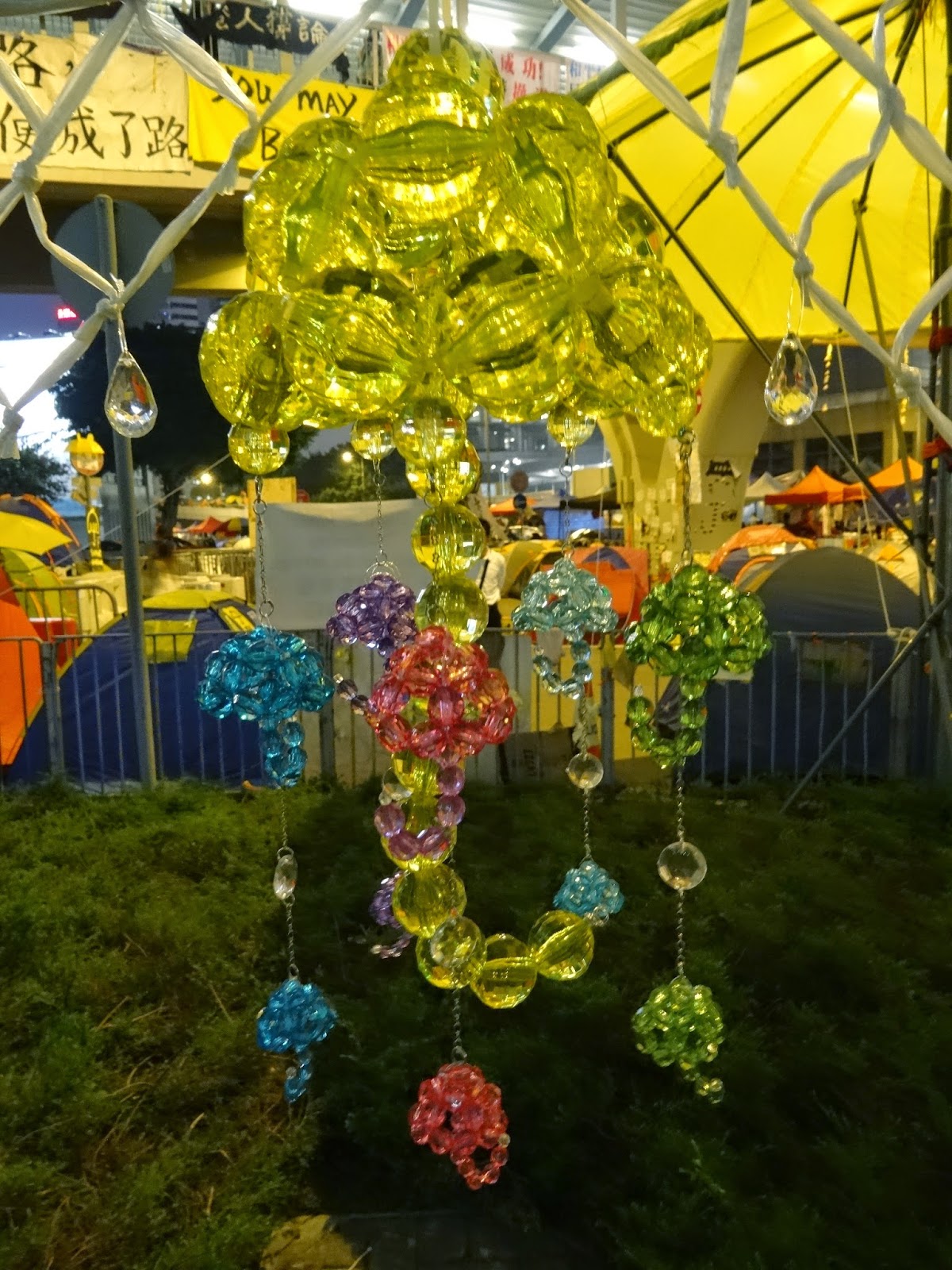 A new creative installation I spotted
at Admiralty last night 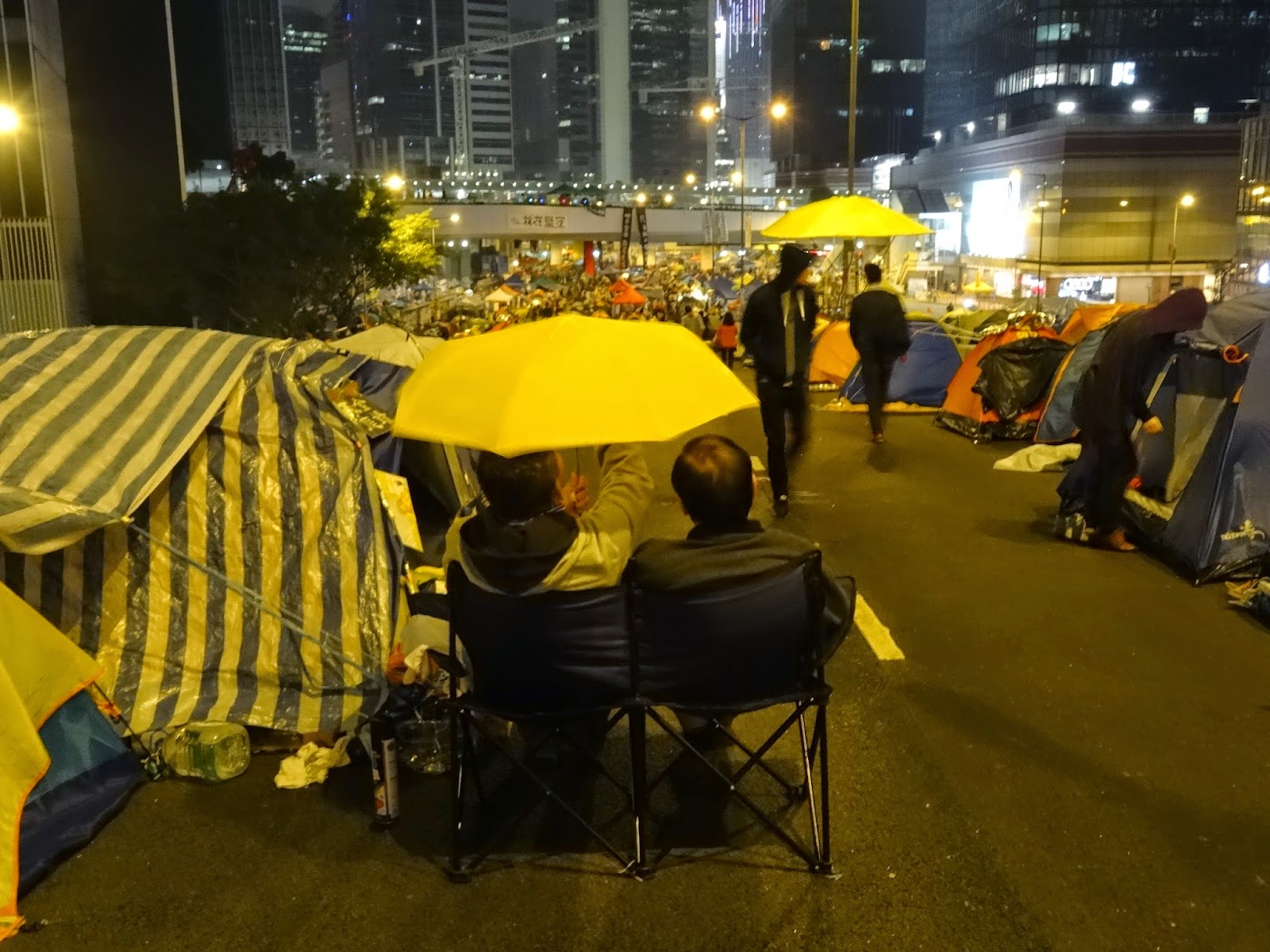 The scene at Harcourt Road last night
(it was drizzling a bit at the time that I took this photo)
I woke up this morning to news of clashes taking place at Occupy Admiralty as some radical protesters tried to break into the Legislative Council building in the wee hours of the night.  And while their first attempt at around 10pm (which I witnessed) had been quickly quelled, subsequent attempts had resulted in glass being broken and the arrest of four men.
When discussing these events with friends who support the Umbrella Movement, everyone was united in their dismay that property had been damaged and hoped that this doesn't reflect badly on the protests as a whole.  To put things in context: to my knowledge, this is the first time since the Umbrella Movement came about that any part of a building has suffered damage, however small -- such has been the non-violent nature of these protests.

Indeed, last night, as I walked through Admiralty (and part of "occupied Central), the scene seemed as mellow and peaceful as I've come to expect it to be.  And as I headed to the MTR entrance at Admiralty Centre, I came across the kind of scene that actually relaxed me and made me wish I could linger longer in the area: one featuring a singer-guitarist and his young (maybe not even seven year old?) son entertaining an appreciative gathered audience with dreamy, easy-listening numbers. As I told a friend, this was the kind of thing that hardly ever gets covered in the news -- not least about protesters and their protests -- and definitely not last night!
Posted by YTSL at 7:46 PM

November and no hiking entries from you...You are truly involved in the activity on the streets and have been doing a thorough job of visually documenting it - wisely, while it's still there!

When the late media theorist Marshall McLuhan coined the term "global village" it may have since been overused, but for me it perfectly describes how the Umbrella Movement accelerated: the instantaneous transmission of information via mobile devices, allowing people to meet in group demonstrations - while also allowing people from afar to globally witness it online.

As a member of the global online community, I do like your blog-tours through the protest sites, which do illustrate that Hong Kong has more to offer than just finance. That includes all of your photos of street gallery public art and installations which grew out of the Umbrella Movement.

Shocking isn't it re the lack of hiking on my part? And then there's my not yet having blogged about my best ever Japan trip to date! ;(

But ya, I feel compelled to share my photos and observations about the on-going Umbrella Movement. I realize there are times when I'm repeating myself but consider it my efforts to try to keep hammering home certain points I want to make that many people still don't seem to have heard/be convinced about... ;S

I concur...I would drop everything I am doing and report on Occupy movement.

I too am following your reporting on the Umbrella Movement in Hong Kong.
After reading how peaceful the protestors are behaving and then seeing on the news a few people breaking glass I wonder who these few people are and if they're shills being used as an excuse for the police to shut the movement down and send the protestors away.

It's hard to "drop everything". One does have to also work, there are chores that needs to be done, etc. But ya, my hiking has been suspended for the moment... though I must say I do miss it quite a bit -- because that activity is good for me physically and is one of those things that makes me loves Hong Kong.

The fact that I've done so though should give some idea about how much I do care about what's currently going on here.

You're not the only person who's made the "shills" suggestion. I think that at the very least, those people who broke the glass were not regulars to Admiralty.

And it's interesting what Joshua Wong has pointed out in an interview, i.e., that ""They broke a glass door and urged those from behind to move in while they stood aloof outside. They failed to look after the safety of the other protesters."

Put another way: that's very uncharacteristic of the protesters that I've seen -- i.e., the lack of responsibility towards others.

YTSL, I meant blogging...not your whole life :) man, you are way too serious and way too stressed at work...

You could always write about your hikes and Japan trip, then publish the things later...just to get your mind off Occupy...

According to news reports(Australia Channel4), triads admitted they were hired by pro-Beijing United Front to pose as Occupy Central and break into LegCo...

What can I say: it's hard to figure out the tone of your messages, especially sans emoticons! ;(

Re the Channel 4 reports: the triads and the establishment united - just like old times, eh?!