Another health note -- this one involving Compulsory Testing Orders for Covid! 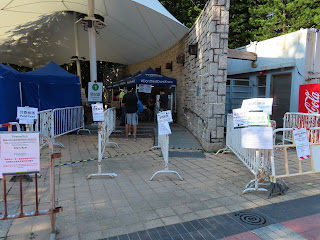 Signs of the times at a Mobile Specimen Collection Unit
here in Hong Kong!
A sign that Hong Kong is still far from being "back to normal" (unlike what the authorities seek to claim): Earlier this week, my building was one of over 40 that day issued with a Compulsory Testing Notice (CTN) -- meaning that everyone of its residents was required to go get a Covid nucleic acid (AKA polymerase chain reaction (PCR) test. In the case of my building, it's because three -- yes, just 3 -- people (out of a few thousand) living in it had come down with the Wuhan coronavirus (or Covid) in recent weeks.
Thus it was that I -- along with the thousands of others of the people living in my building (and workers and visitors who had spent more than two hours in it over the course of a week), and tens of thousands of other people living in other buildings issued with a CTN -- had to go to a designated Mobile Specimen Collection Station or Community Testing Centre to be tested for Covid.  More than incidentally: the sense I have is that there must be scores of them since there is not just one but two of them within walking distance of where I live!
For those living outside of Hong Kong who wonder what would happen if we don't comply, and go and get tested: we'd be slapped with fines of up to HK$10,000 per person!  Just last month, 54 residents of the J Residence in Wan Chai were found to not have "complied with the compulsory testing notices" and collectively been issued HK$460,000 worth of fines!
I'm not sure whether that building's management and security guards were negligent in alerting the residents to the Compulsory Testing Order having been issued for it.  I will say though that the equivalent in my building could never be accused of that as copies of the CTO were put up in the lobby and by the escalator entrances on the ground floor, and put into every single mail box in the building!  Also, on the day that the CTO was issued, the security guard at the desk made a point to alert every person who passed by his station about it!
For the record: this is the second time that I've had to have a PCR test -- and both times have been the result of a Compulsory Testing Order being issued for my residence.  The first time, the test had involved a guy sticking the testing stick up my nose and it had been pretty painful.  But with the government having decided last week that throat swabs are adequate, I was spared that this time around!
And while I officially was supposed to have had a throat swab, I ended up just getting a mouth swab!  As University of Hong Kong microbiologist Dr Siddharth Sridhar's pointed out: "Actually, collecting a proper throat swab is very difficult. You've gotta use a tongue depressor, a torch and get right to the back of throat and tonsils with your swab."  But rather than do that, my tester this time around actually just swabbed my tongue and sides of my mouth!
I wonder if this had a part in my test turning out to be negative.  What I do know is that this mouth swab was a lot less painful than the nose swab I had some months back!  In any case, cue relief on my part once more upon getting a negative test result.  For even if I managed to not get sent to Penny's Bay and, instead, could stay in my own flat, it's still not exactly ideal to be unable to get out of the space for a week!   And okay, yeah, I was expecting a negative result as I don't have any Covid symptoms. But you never know -- since, remember, some people who have Covid are asymptomatic!
Posted by YTSL at 11:48 PM

I have also been force to go for such PCR tests quite a few times. Some of them owes to colleagues in the office had been confirmed to have Covid, while another for the residents of the block I lived in was ordered to do so.

A waste of time for everyone. Only the out-sourced company got paid. I do not generally trust the jabs either despite I have been forced to go for it. Had had three jabs already, but by the track records of Government policies, don't know if they would change the rules and force citizens to have more jabs for no reasons except for the statistics. I do not intend to have anymore of those Covid jabs if I can get away with it.

On the other hand, using the number of jabs taken as a gauge to measure the effective of the anti-body is silly as it differs from person to person.

It's so inconsistent - the building where I live had at least one reported account in July (my daughter!), but there was no CTN issued, even though it should be obvious that a 12-year-old girl wouldn't be living there by herself... Not even the rest of us in the flat were required to take a test!

Our covid test is done though the nose.
Coffee is on and stay safe

Oh dear re your having had to take multiple PCR tests! Re the jabs: I've now had four and must say that I trust them (specifically the BioNTech/Pfizer vaccines) more than the tests. BTW, I'm also going to have a flu shot this year (like I did last year, etc.)!

It seems that since the 5th wave hit Hong Kong, it takes more than one reported case in a building to trigger a CTN. Interesting to hear that none of the people in your flat were required to be tested though. Perhaps the medical services were overwhelmed then?!

The throat/mouth thing only is a recent move -- and only for PCR tests. RATs (Rapid Antigen Tests) still require nose swabs -- and would you believe that one's required to do them to enter bars (with bar, as opposed to restaurant or coffee shop, licenses) here in Hong Kong?!