A dance show memorable for the walkouts it prompted! 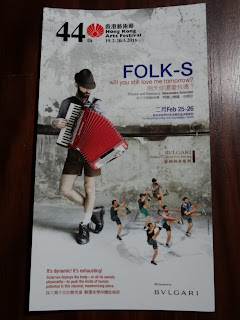 The performing arts show I've seen the most
audience members walk out of! :O
Years ago, when I was still living in Philadelphia, I attended a screening of Hungarian auteur's Bela Tarr's The Werckmeister Harmonies.  This 145-minute-long drama most definitely has its fans (including many prominent film critics).  But it also happens to be the film at whose screening I've seen the most walkouts: as in around three quarters of the original audience!

At the risk of sounding like a Philistine, I must admit to not being super impressed or mesmerized by this cinematic work which has many scenes of people walking and walking and walking and walking.  But I did stay until the end of that screening of the film; if nothing else because I found the general audience reaction to this art house offering pretty amusing as well as didn't want to be left wondering if I had missed something particularly incredible if I didn't stay until the very end of the screening!
Over the years, I've seen people walking out of other film screenings -- and since moving to Hong Kong, I've also attended performing arts shows that induced audience walkouts (notably a performance of Eileen Chang's Red Rose, White Rose by the National Theatre of China that featured sexier language than some of the more conservative members of the audience found acceptable).
But it wasn't until this evening, at the performance of FOLK - S: Will you still LOVE me tomorrow (that's part of this year's Hong Kong Arts Festival) that I've seen the number of audience walkouts come anywhere close to that of that fateful night in Philadelphia when I went to see The Werkmeister Harmonies and ended up spending quite a bit of time observing my fellow audience members!
It's not that the Italian troupe that was performing their dance of choice -- the Schuhplatter, a folk dance popular in the Alpine regions of Bavaria and the Tyrol that began as a courtship display -- all that badly.  And it's not like one couldn't appreciate the effort they put into staging this show conceived of by Alessandro Sciarroni which looks to tax their stamina and leave them incredibly sweaty and some parts of their bodies (including the palms which they used to strike different parts of their body at various points in the dance) disturbingly red.
But it often seemed like this dance event was like a competition between the dancers and the audience to see who would decide first that they had had enough, and walk out of the auditorium! And, in fact, by the time I left myself (about one and half hours after the start of the show), two out of the six dancers had left the stage and so too did the sound guy who had been part of the performance as well as approximately one third of the audience!
The performance began promisingly enough with an intriguing dance display that involved the dancers managing to dance in near perfect unison despite five out of the six of them having tape over their eyes (and consequently being unable to see).  Closing my eyes for a few moments, it was actually rather cool to hear (without seeing) people dancing.   Opening my eyes again, I saw that a few minutes later, the tapes on the dancers' eyes were removed and cast to the floor -- and it seemed like the show proper would then begin.
By just around the half hour mark of the show though, the performance was feeling kind of boring -- because the dancers just kept on repeating certain moves over and over and over again -- and prompted the first walkouts of the evening (which included my immediate neighbor to the left, who mumbled that she felt sick as she made her excuses to leave the auditorium!).  Soon after, the buzzy noise that was "playing" as the dancers danced got loud and really annoying -- so much so that I ended up sticking my fingers into my ears to prevent myself from being driven out of the auditorium by it!
Around the one hour mark, many members of the audience clearly felt that they had had enough, and the number of walkouts dramatically increased.  At this point, part of me was getting rather pissed off but grimly determined to not "break" before the performers -- who, after all, were the ones doing the sweating and not looking all that happy while the likes of me "just" sat back and watched them!  And there was another part of me that was getting somewhat amused at the evening's actually rather farcical developments!
A little after the one and a half hour mark though, a number of people in the audience began tittering during one pause in the dancing, then clapped during another pause in the dancing -- the way I see it: not because they loved what they had witnessed but because they were politely telling the dancers "Enough, please stop!"  When these didn't have the hoped for effect,  I decided to stop wasting my time and join the walkouts.
Truly, it was like the audience members were willing the dancers to end the "show" but the remaining dancers weren't going to conclude their performance until every single member of the audience had decided to call it a day first!  So, for all I know, some people could still be there in that auditorium (out of stubborness, a misguided sense of politeness, or whatever); engaged in one of the weirdest "stand-offs" I've been witness to -- even while the first audience members to walk out of the show did so hours ago! :O
Posted by YTSL at 11:40 PM

Was getting people and participants to walk out part of the event?

I get the feeling that this was indeed the case. Really weird -- and I'm sure that the early walkouts and many other members of the audience ended up feeling like we had not got value for our money. Honestly, if one could get refunded if one walked out within 30 minutes from the start of the performance (the way that it was so for a couple of art house cinemas in Philadelphia when I lived there), I would have done so! :O

That's the first time I heard that performers actually walked off the stage - was that because something was wrong with the sound system? Or were they frustrated that audience members had already left? Either way, it sounds like a very bizarre experience and I'm amazed that you lasted so long!

I think the performers walked off the stage because they were so exhausted! Honestly, there were times during the show when it felt like an endurance test/competition -- and yes, I reckon that's pretty bizarre, since I'd wager that most of us who went to the show expected to see something more conventionally artistic! ;b