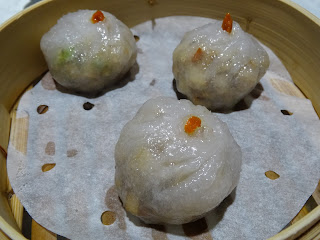 Dumplings on the dim sum menu 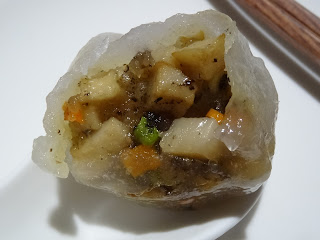 Check out the fillings for the above dumplings! 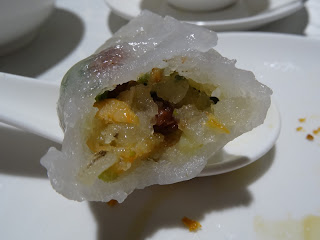 
Considered less auspicious than the first two days of Chinese New Years, the third and fourth days are often when people will hang out with friends rather than family  Thus it was that on the third day of the Year of the Monkey, one of my hiking buddies (who is one of those lucky teachers that has the whole of this week off!) and I met up to have a dim sum lunch; and this despite her having family in Hong Kong!  And although the two of us aren't the biggest people around (in weight and width as well as height!), we still managed to consume a sizeable amount of food -- and tea -- on that occasion.


More popularly known as yum cha (Cantonese for "drink tea") in Hong Kong, because one tends to drink a lot of tea during these meals to combat the oiliness of much of the food served, dim sum ("touch the heart") is a meal I enjoy whatever you call it, and pretty much wherever I've had it -- be it in Malaysia (where I was introduced to it as a child), London (where the food served at the late, great Man Fu Kung seemed like the closest thing to genuine Hong Kong dim sum over in that city!), Philadelphia (where I had many a dim sum lunch by myself as well as with friends) or Los Angeles (where a good friend took me for a lunch in that city's old Chinatown).

In Hong Kong, I tend to favor branches of the moderately priced Tsui Hang Village and Victoria City Seafood Restaurant when I dine with others (while going to the Michelin-starred -- but cheaper, and frankly not as delicious! -- branch of Tim Ho Wan near my place for take outs, and Luk Yu only at the invitation of a regular at that seriously "old school" restaurant!).  And while I used to like the restaurants where there were dim sum carts pushed around the place, I've since learnt that the fresher dim sum (which is frequently made to order) are those that are served in restaurants that don't have people pushing dim sum carts around.

Whenever I've eaten dim sum with non-ethnic Chinese people, I've found that such as chicken feet and duck's tongue are off limits -- or looked upon as a scary "double dare".  Something else I've been surprised to discover can put off some "white" friends are rice rolls (cheong fan), whose texture they pronounce as slimy but which I think of as smooth and slippery, and not in a bad way!

What with the friend I had dim sum with yesterday being ethnic Teochew (or Chiu Chow), one of the first dishes we decided to order was duck's tongue!  At the same time, we did also get a bunch of dumplings; with my choices of those being the ones filled with truffle paste and mushrooms (that I previously had at the restaurant and really love), and others filled with peanuts, dried shrimp and pickled vegetables (a mix that may sound weird but actually was super delicious!).

While we waited for our food to be served, my friend voiced aloud that it'd have been better if we had more people at yum cha with us. I told her that two people is fine by me; this particularly since, post coming to Hong Kong, I've even taken to going for dim sum by myself after another friend pointed out to me that lots of people do this here -- and that it's perfectly acceptable to just have a newspaper (or magazine) for company on these occasions! ;b
Posted by YTSL at 11:46 PM

Gwulo had had gathering there a few years ago with guests from Europe. Some of them had never had Sichuan dishes before and they couldn't stop eating even with the simulation they have never experienced before. I remember they have some dim sum from the North.

Funny you mentioned a Sichuan place: at dim sum that day, my friend and I were both talking about how Sichuan may be our least favorite Chinese cuisine!

I know San Xi Lou has fans but I don't think I'll be going any time soon. I can deal with Thai, Indian, etc. spicy but less so the Sichuan spicy and number combo! ;S

Not all Sichuan dishes are spicy. Actually the better ones are not as spicy as Thai or Hunan dishes. Many of them are not spicy at all. I'll have to find some examples later, with recipes.

Anyway, if San Xi Lou is concerned, for all their spicy dishes, you could customize the spiciness to your own liking, or opt for none at all. Do give it a thought sometime.

I know not all Sichuan dishes are spicy but I still think I prefer other Chinese cuisines (like Cantonese and Chiuchow). Still, if I decide to give Sichuan a go again, I'll be sure to bear in mind San Xi Lou. :)