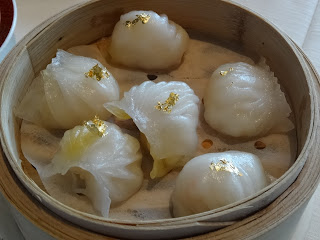 Yes, these har gau have edible gold leaf on them! 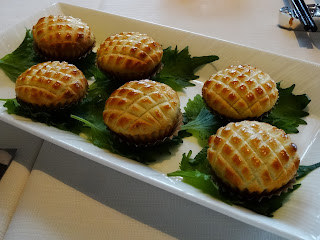 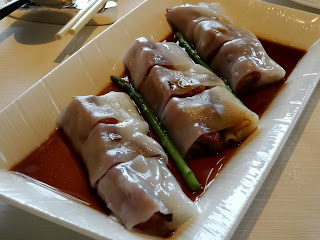 Foodie that I am, it's not often that I remember a restaurant's decor more than its food.  But such was the case for the first time I went to Tin Lung Heen, the Ritz-Carlton Hong Kong's Cantonese restaurant that's located on the 102nd floor of the 108-storey International Commerce Centre.

It's not just that we had the good fortune of our dinner that evening taking place on a high visibility day that consequently gave us spectacular night views.  But I don't think it inaccurate to say that this restaurant (whose name translates into English as "Dragon in the Sky") has one of the "blingiest" dining establishment decors around.  And while I have little doubt that the food served that evening was good, it wasn't so memorable that any particular dishes we ate that night have stayed in my mind over the years, or made me think that I really should go eat there again.

Still, when I was invited to a dim sum lunch there last week, I definitely wasn't going to say no.  If nothing else, I was interested in seeing how a two-Michelin-star restaurant would make its yum cha offerings stand out.

Upon scanning the menu, it soon became apparent that one way Tin Lung Heen goes about doing so is to use some pretty choice ingredients in its dishes.  I'm not just talking about traditional Chinese specialty ingredients like bird's nest, fish maw, sea cucumber and such here but also prized Western imports such as black truffles, caviar and Iberico pork.

Some of these were used as garnish -- and I have to say that my cynical reaction when seeing such as flakes of edible gold leaf on food (elsewhere than in Kanazawa, where I was served a complimentary cup of tea with gold flakes floating in it!) is that it gives the restaurant a reason to jack up the price of what otherwise were pretty regular and average tasting dim sum staples such as har gau and other steamed dumplings.  Others had a more substantial role as fillings in such as cheong fan (steamed rice rolls) and baked pastries; and I have to say that, in the case of the Iberico pork char siu, I actually prefered it as a filling rather than on its own (on account of it tasting too richly decadent that way).

In short: on my second visit to Tin Lung Heen, I noticed that there was edible bling as well as decorative bling about the place!  As gastronomically memorable as much of this dim sum meal I had there was though, I did notice that when it came to those dishes which looked to have been prepared in a simpler, more classic manner, I honestly would prefer to eat that at far less ostentatious -- and, also, no doubt way less expensive -- establishments; and this even when someone else is paying!

In particular, I genuinely believe that the roast goose served there that day was nowhere as good as that which can be found at Yat Lok.  Also, gold flakes or no, I'm actually not convinced that the har gau served at Tin Lung Heen are as delicious as those on offer at my neighborhood Tim Ho Wan (though, in all fairness, it's worth pointing out that these two much cheaper dining establishments also have had Michelin stars bestowed on them)! ;b
Posted by YTSL at 11:51 PM