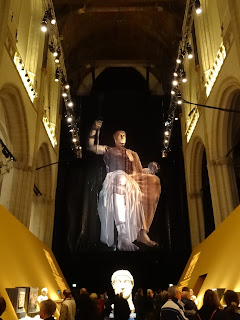 Not the kind of sight that you'd expect to see
inside a church, right? 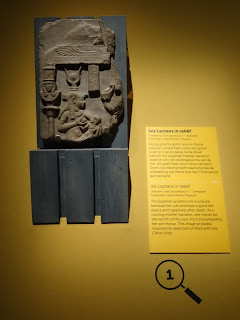 An image of the Ancient Egyptian goddess Isis,
whose name people now sadly tend to
associate with fanatical Islamic militants 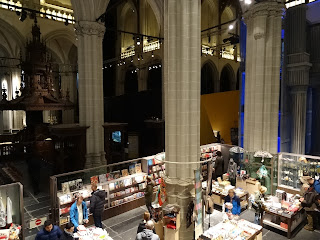 
On my final day in the Netherlands, I went into the church which is considered to be the most important in the country -- despite it no longer being used for regular religious services.  Amsterdam's Nieuwe Kerk (New Church) -- which actually isn't all that new since it was built in the 15th century -- still is where Dutch royal investiture ceremonies and weddings take place.  However, it is more regularly used these days as a venue for organ recitals and major exhibitions, like the Rome: Emperor Constantine's Dream which showcases a number of ancient Roman artistic treasures and tells the story of the 4th century ruler who looked to have been the Roman Empire's first Christian emperor.


Visually, it often seemed quite weird to see Roman sculptures, mosaics and and such being exhibited in consecrated space which also happens to be the final resting place of many Dutch personages, including a number of the country's naval heroes.  Still, I suppose there's a Christian link there in that the historical figure at the center of this exhibition has been credited with playing a major part in turning multi-cultural Rome from a multi-religious imperial capital into the center of papal power.


Incidentally, after I took the first two photos at the top of this blog post, a big but friendly security guard came up to tell me that photography actually wasn't allowed in the area of the church where the Rome: Emperor Constantine's Dream exhibition had been set up.  When I told him that that wasn't what the person I had bought my exhibition entry ticket from had told me, he sighed and said that this wasn't the case with all exhibitions at the church but it seemed that the Italians were more concerned about copyright and such then many others.


After I asked him if it was okay for me to take photos of the church building itself (in and outside the exhibition area), he sensed -- rightly -- that I was interested in the Nieuwe Kerk itself as well as the exhibition of Roman treasures currently taking place within the church, and got very friendly.  It turns out that he's quite the fan of this Late Gothic church located on Dam Square, next to the Royal Palace, and considers it one of the highlights of his life to have had a chance of playing on the larger of the church's two organs -- an instrument built in 1655 that's so large that it takes up the church's entire west wall!


Popping up every now and then to continue our conversation as I went about checking out the exhibition, I also learnt from my new friend that the Protestant Church of the Netherlands actually doesn't have all that many adherents these days (just 9 percent of the population, according to the CIA's World Factbook; with 42 percent of Dutch people saying they have no religion).  Consequently, many churches no longer hold services; and such as Amsterdam's 800-year-old Oude Kerk (Old Church) as well as its Neiuwe Kerk are more likely to serve as exhibition venues than function solely as places for people to go to pray.

Over the course of our discussion, I told him of my experiences the previous day in Haarlem, which included finding its Protestant Grote Kerk (Great Church) closed to the public but at least one Roman Catholic church being open for service.  My new friend -- who had previously revealed that he's a Roman Catholic -- confirmed that, if they are not hosting such as exhibitions, Dutch protestant churches only open on Sundays, unlike Catholic ones.  This, he and I agreed, is a pity -- especially with regards to the older churches whose architecture and interior decor we often find interesting and sometimes downright beautiful!
Posted by YTSL at 11:59 PM