Hiking on Hong Kong Island, and in the clouds, one winter's day! (Photo-essay)

It's been a while since I last put up a hiking photo-essay on this blog; close to two months, in fact!  In that period, I've gone a few more treks in the Big Lychee's countryside.  So I think it's high time to resume my Hong Kong hiking pictorial documentation -- with a Hong Kong Island outing that was interesting and actually quite enjoyable even without being particularly photogenic!

One winter's day some time back, two friends and I tramped from Wong Nai Chung Gap to Quarry Bay via Jardine's Lookout and Siu Ma Shan.  Although we hadn't planned to do so, we ended up spending quite a bit of time in as well as above the clouds.  Alternatively put: we spent much of our hike in conditions in that were quite a bit more misty and low visibility than had been anticipated would be the case!

Although we ended up being wetter than would be ideal, none of us ended up catching any colds or such over the next few days.  Perhaps it helped that after exiting Tai Tam Country Park, we headed directly over to a nearby cha chaan teng for something hot to eat and drink.  (And yes, I'm indeed one of those people for whom the hike experience isn't really complete without a convivial and hearty post-hike meal!) 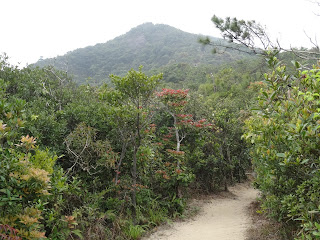 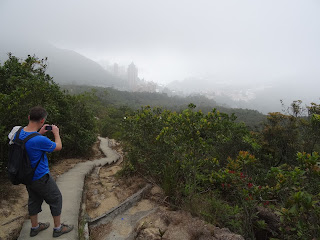 Soon, though, the clouds and mist began
moving in to obscure the views! 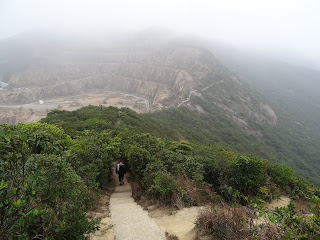 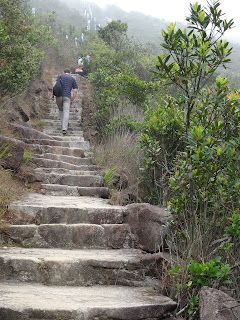 I'm not quite sure why it is but the one other time
I hiked in super misty conditions, it also was on
a trail with a lot of steps to ascend! ;S 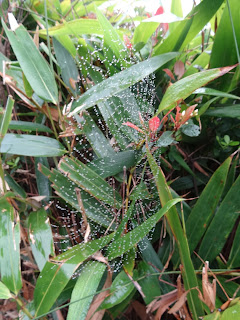 Water droplets on a spider web make for
a naturally artistic sight :) 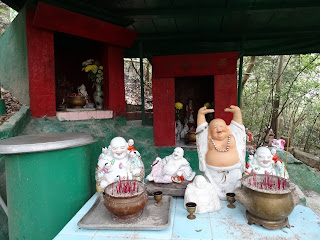 A group of Laughing Buddhas isn't quite what one expects
to come across on a hike, right? ;b 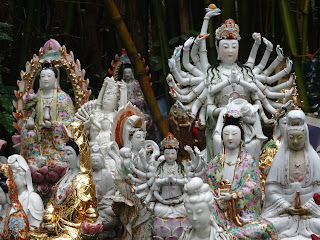 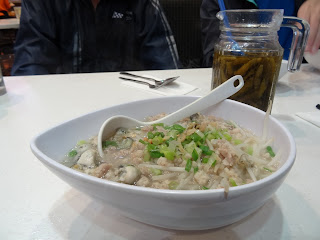 My humble post-hike meal of minced pork, oysters and
spring onion noodles may not look great but, especially when
spiced with dabs of chili sauce, it hit the spot for me! ;b
Posted by YTSL at 6:32 PM

I enjoyed this blog entry very much because the of variety of photos you took and shared. Clouds sometimes make for wonderful photos because of what they hide and suggest. And the "shrines "along the way were fun to see. And what looks like a simple meal at the end of your hike evokes a feeling of warmth and comfort.

I love the way fog and mist look and your got great shots on your hike. Beautiful flowers in the post before this one.

Your one of those that make us realize there's more to HK than the shopping and Disneyland.

You must do a lot of hiking. As for your question on our winter. Actual our winters been a lot milder and summers more extreme.

I'm glad you enjoyed this photo-essay and thought the meal looked good. Have to say that it really did taste far better than it looks! ;)

Thanks for appreciating both this blog post's and the one before's pictures. :)

You made my day with that comment! BTW, would you believe it if I told you that I've not been to Hong Kong's Disneyland and have little intention of doing so? :)

For years, I averaged one hike a week and these days, average two a week. That's probably a lot by most people's standards but I know of people who hike more often than me... ;b