Fantastic(al) imagery abounds at The Hague's Escher in Het Palais! 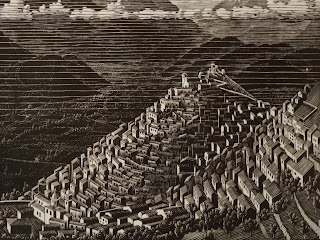 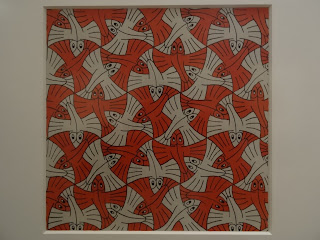 Which birds can you see -- the white ones, red ones, or both? ;b 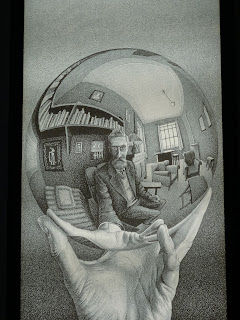 Decades ago, when I was a primary school student in Penang, Malaysia, I was introduced to the impossible world of M.C. Escher via books on, and filled with images of, his fantastic(al) works.  In the years since, I've roamed through the exhibition areas of what must be hundreds of art museums and galleries in four different continents.  Yet, as far as I can recall, it wasn't until I paid a visit to Escher in Het Paleis, over in The Hague, that I saw a work by this 20th century Dutch graphic artist on display on the wall of a museum, never mind got to be in a museum showcasing his work!


The second of the art museums in the city that's the seat of Dutch government that my German friend and I visited on our daytrip to The Hague, Escher in Het Paleis is located within walking distance of the Mauritshuis which we spent a few hours in earlier that day.  Housed in the Lange Voorhout Palace which was used as a royal residence for a time, including by Queen Emma (who is the subject of a mini-exhibition within its walls), the museum has been accused of displaying replicas rather than actual original works by Escher -- but to be honest, I don't think many of the visitors to this popular museum care all that much if that's indeed the case as, original or replica, the remarkable images on display have a capacity to mesmerize!


Like his fellow Dutch master artist Vincent van Gogh, Escher spent time abroad -- in his case, in Italy and Switzerland, particularly -- and was inspired to develop his particular, easily recognizable artistic style outside of his native land (in Escher's case, when he first visited the 14th century Moorish castle in Granada, Spain, known as the Alhambra in 1922).  Unlike van Gogh, however, Escher achieved commercial success and widespread recognition in his lifetime -- though it can often seem like he's respected far more by mathematicians than those in the fine arts world!


Still, it's not impossible for the non-mathematically inclined -- like myself! -- to be fascinated by Escher's art works.  We're talking, after all, of works filled with interesting optical illusions that have birds turning into fish (and vice versa), never-ending staircases, buildings filled with impossible spaces, two hands holding pencils drawing each other, and so many other incredibly imaginative images!

How many artists' works can get you rubbing your eyes in disbelief, filled with wonder, and also sometimes breaking out into a smile at the sheer ingenuity -- and, surely, also sense on fun? -- on display?  I'd wager very few -- but the creations of Maurits Cornelius Escher, the star student of a Dutch Jewish artist who perished in the gas chambers of Auschwitz, are among those who do so for me.
Posted by YTSL at 11:15 PM