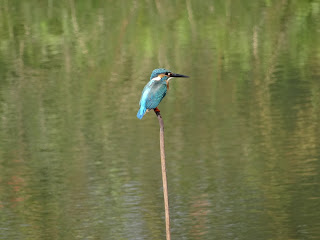 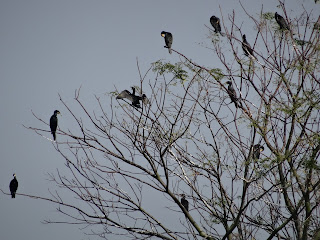 Larger birds (cormorants?) on a tree in the vicinity 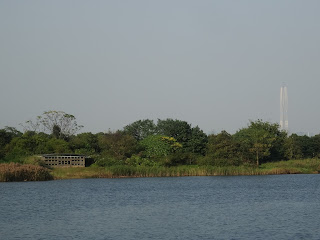 A skyscraper looms over on the Mainland Chinese side of the border
but over in Hong Kong, there's a haven for bird (and birdwatchers!)

On two occasions already this year, I've found myself in the vicinity of the body of water up known in Cantonese as Sha Tau Kok Hoi and in English as Starling Inlet.  On more than one previous occasion, I've spotted egrets and other birds hanging out in the area.  But even though I do make a point to look for them whenever I visit the area, I didn't spot all that many feathered creatures about these past two times.
An early 2016 visit to the Hong Kong Wetland Park also resulted in fewer bird sightings than I think is usual for this time of the year at that location -- and I'm moved to wonder whether the unusual weather/temperatures that Hong Kong (and other climes) has had this winter is to blame for this.  Still, this isn't to say that that Tin Shui Wai facility was entirely bereft of avian critters: for, in all honesty, one really didn't have to look that hard to spot certain winged creatures which, while wild, seem perfectly at home in this part of Hong Kong!
Although the park's bird hides (particular the one on the edge of a mud flat) most certainly are where one is most likely to spot dedicated bird watchers (many of them equipped with very impressive-looking zoom lens), my bird sightings that day weren't restricted to those made while I was ensconced in one of those shelters.  Indeed, two of my coolest critter spottings of the day occured while I was happily strolling about the area, enjoying that day's good (as in dry and not too cold) weather!
I think here of the beautiful kingfisher that I saw perching atop a stick protruding out of a pond so quietly and for so long that I actually wondered if it was a wooden carving rather than a real bird; that is, before it decided to take flight and go somewhere else.  Then there was the confident grey heron which even some noisy visitors (including a party of schoolchildren from across the Hong Kong-Mainland China border and a chatty old man!) failed to scare away from the part of the Hong Kong Wetland Park which it looked to have made itself very much at home!
More than incidentally, I found it interesting that this Hong Kong facility appears to attract so many visitors from Mainland China (many of whom appear to have been bussed in for the afternoon).  Is it possible that there really are far fewer feathered creatures over on the Mainland China side of the Hong Kong-Mainland China border than over on this side?  In any event, I sincerely hope that these people come away from their visits with a greater appreciation of -- and respect for -- nature, and a realization that they have a part to play in ensuring the continued existence of the wildlife on view.
Posted by YTSL at 11:44 PM