An afternoon on Tap Mun (Photo-essay)

The grassy island of Tap Mun has never been home to all that many people.  At its peak, this small body of land that lies to the north of Sai Kung Peninsula only had 2,000 inhabitants -- and nowadays, it has just around 100 human residents.  So it should be no surprise that there are plenty of areas of the island where one can get far away from the madding crowd.

Indeed, even though I initially feared otherwise the second time that I went to Tap Mun, on what I got to realizing was an Easter Sunday, the friend I was with and I did manage to find a number of quiet as well as scenic spots on the island; this especially after we hiked to its northern portion, along trails that often had helpful red ribbons pointing out the way! ;b 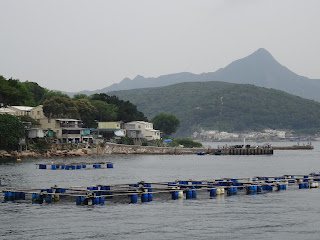 It may not look like it here but there's actually a body of water
between the part of Tap Mun in the foreground of the above photo
and the sections of the Sai Kung Peninsula in the picture! 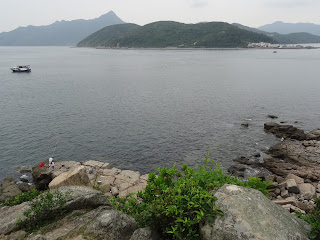 This view from Tap Mun iself shows things up more clearly though! 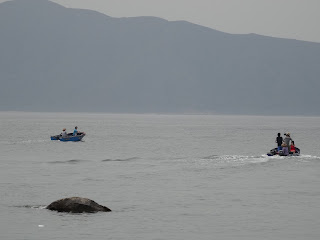 I still have yet to find out who was being filmed that afternoon,
and what film the footage was (meant to be) for... ;( 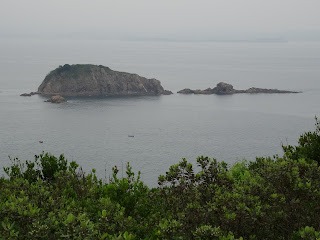 A view from Tap Mun's northeast of nearby Kung Chau
(AKA -- I kid you not! -- Lion Rolling a Ball) 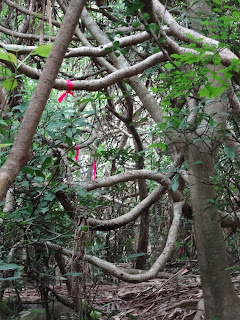 There's a trail there -- the red ribbons say it's so! 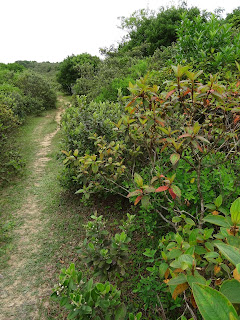 Soon afterwards, we got to a section of the trail
that was easier to see and go along, in a part
of the island that lived up to its grassy name 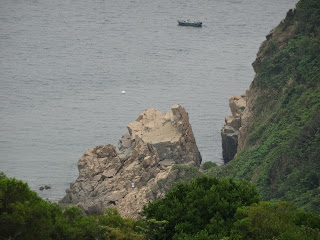 Try as we might though, we couldn't find a way to get
to that rugged bit of Tap Mun in the above picture :S 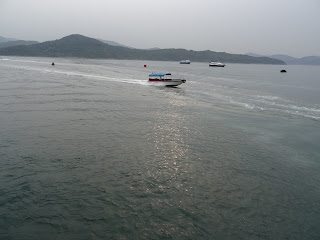 A far cry from the container ships and other large sea vessels
spotted in Victoria Harbour and its neighboring waters ;b
Posted by YTSL at 11:21 PM

The Island has something called Tai Ping Ching Jiu (like the one in Cheung Chau which held annually. There are others and one of them in Yuen Long I think, took place once every 60 years) but for this particular island, they run for once a decade. The last one took place in April 2009. So mark the calendar (for approximation), the next one is going to take place sometime in 2019. Don't know the schedule yet as the elders had not published details yet.

It would be quite crowded during the festival. Worth trying to go there to observer if you could secure a place.

Have you been to the Tai Ping Ching Jiu at Tap Mun?

From the info there, seems like this year, we should look out for Tai Ping Ching Jiu at Tuen Mun, Shek O, Nga Tsin Wai Tsuen and Kat O! :b

I do not believe I have ever been to Tap Mun. At least not yet. It is a difficult place despite very popular to campers doing wild camps. I think have not been there simply it is sort of inconvenient. And I do not want to join local tours. Anyway......

The Shek O one seemed to take place around November...... I have not been to the festival before. Must be very crowded and traffic would be a nightmare. I guess the easiest to access is the Tuen Mun one.

For Nga Tsin Wai Tsuen, I guess it is over as the last residents had move out (I think) earlier. The village is to be demolished soon.

For this kind of festival, I think I had only been to the Fire Dragon Festival in Tai Hang a few times. Have to go early to secure a good locate. My last time there got me covered in ash with a few superficial burn on my hands when I got hit by a few incense sticks when the guy spinning the Dragon Ball went by within a few feet from me.

Tap Mun's not too difficult to get to on Sundays, with two buses (one from Diamond Hill and another from Sai Kung town) going to Wong Shek Pier, and kaido regularly sailing from Wong Shek Pier and also Ma Liu Shiu over to the island. So no need to join a tour to get there!

I went to the Cheung Chau Bun Festival last year and have been a few times to see the Fire Dragon at Tai Hang. For the latter: I think the trick is to avoid the main streets and stand near those establishments in the side lanes which have put up some "choi" for the fire dragon to "eat". It also can be fun to chase after the dragon -- though one year, my party took the wrong turn and found the dragon chasing us at one point! ;b