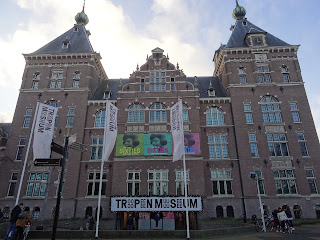 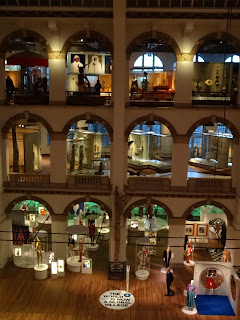 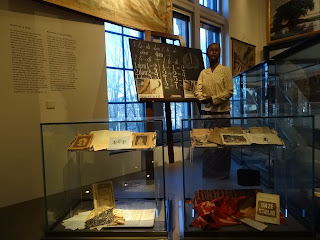 The cultures and society of the former Dutch East Indies
(present-day Indonesia) is the subject of much attention in this museum
On the last day of 2015, I decided to pay a visit to the Tropenmuseum, one of Europe's leading ethnographic museums and also one of Amsterdam's largest museological institutions.  My original plan was to spend much of the day within its walls but upon getting there, I learnt that the museum was closing early that day on account of it being New Year's Eve (something that appeared to be very widespread practice in the Netherlands).
Consequently, as with the Rijkmuseum, I ended up having to forego checking out a good part of the museum because of time constraints -- yet, at the same time, came away feeling that this is one museological establishment that's filled to the brim with interesting objects and treasures galore.  Also, like at the Netherlands' premier art museum, my visiting strategy at the Tropenmuseum involved targeting specific exhibition areas rather than trying to run about all over the place to see a bit in each and every one of the museum's galleries!
At the Tropenmuseum, I first went through The Sixties, a special exhibition about the 1960s which runs through to March 13th.  Taking the view that it was the era "when globalization as we know it first appeared", this idea and theme is developed, explored and presented using items from the worlds of fashion, music, architecture, photography and more.  And within this overall subject umbrella, cool mini-stories are told about such Dara Puspita, Indonesia's first female pop/rock band, and how the kaftan was transformed in the 1960s from the traditional garb of Arab males to a type of clothing worn by females in many different parts of the world, including Elizabeth Taylor and at least one female member of the Dutch royal family.
On the next floor up in the museum, I made for the galleries containing artefacts collected in what was then the Dutch East Indies and other parts of Southeast Asia.  As might be expected, this is a large and extensive collection indeed.  But while I appreciate the Tropenmuseum's acknowledgement of the impact of Dutch colonialism on the peoples, societies and cultures of the former Dutch East Indies -- and also the museum itself, I must admit to wondering at times, while looking at such as a number of sculptures from Borobudur and items that looked to been removed from people's graves and tombs, if this institution's management has thought about doing such as repatriating some of the artefacts in their collection back to Indonesia?
On the Tropenmuseum's top floor, I prioritized visiting the Africa galleries but ended up also checking out Western Asia and North Africa sections, and spending time in the gallery focusing on the World of Music after finding that I actually had more time to look at things in the museum than I had initially realized!  If truth be told, I found the Africa section of the Tropenmuseum somewhat disappointing; not least because there weren't as many objects from Tanzania on display as I had hoped.
On the other hand, I found the museum's Western Asia and North Africa sections really applaudable, particularly for its highlighting the commonalities that Islam has with Christianity and Judaism.  (We're talking, after all, about three religions which all are monotheistic and venerate the likes of Abraham/Ibrahim, Moses/Musa and Jacob/Yaakub.)  In addition, I found the section devoted to legendary Egyptian entertainer Umm Kulthum really cool -- and one of the instances where multimedia truly augmented the quality of the museological experience.
On a further multimedia note: I can see why in this day and age, museums feel that they need to supplement the more traditional forms of display with ones that include audio, video and interactive components.  However, if the latter are not kept maintained, they can so easily malfunction and even breakdown.  Such was the case with some of the equipment in the exhibition areas of the Tropenmuseum.  And at times like this, one is inclined to think that the older modes of display may well still be the better ones after all!
Posted by YTSL at 11:59 PM

I didn't know Amsterdam (and nearby Dutch cities) had so many museums! The Tropenmuseum is a major find for me because of my interest in Southeast Asian art and culture (especially Borobudur, one of the finest religious monuments I've ever visited). This ethnographic museum looks like it would take many visits to do it justice...Also, "The Sixties" exhibit sounds interesting. Your quote, referring to that era, "When globalization as we know it first appeared" is an accurate observation.

Would you believe that Amsterdam has over 40 museums? The Tropenmuseum was cool but the only Amsterdam museum I feel one really needs to visit many times to do it justice is the Riksjmuseum. :)