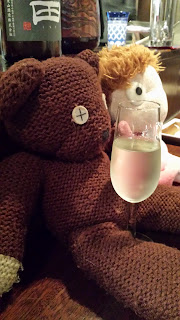 Puppet Ponyo and an inebriated friend
at Sake Bar Ginn! :b 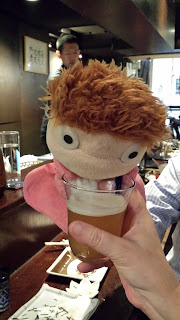 Puppet Ponyo trying to figure out
if it was nihonshu or beer in the glass!


One year ago today, a memorable meeting took place between two beloved plush toys.  Readers of this blog are undoubtedly familiar with a certain red-haired Puppet Ponyo.  As for the second character in question: it may resemble Mr Bean's Teddy, but it actually belongs to the mother of my South African drinking buddy -- and, like Puppet Ponyo for me, her Teddy is her regular travelling companion (and thus accompanied her on her maiden visit to Hong Kong).


Weeks before South African Teddy and its human came over to the Big Lychee, it was decided that Teddy and Puppet Ponyo should meet at Sake Bar Ginn (which, incidentally, is where my South African friend and I first met).  When I called to make reservations that evening, Momo-san (the bar's proprietor) -- who had been privy to my friend's and my plans for the plushie summit -- asked if she should reserve five seats or three for our party!


I assured Momo-san that three seats would be enough, as I figured that Teddy and Puppet Ponyo would prefer to be arrayed at the counter on which our drinks and food (also) would be placed.  And so it proved.  Far less expected though was that seconds after meeting in the elevator heading up to the bar, the two plushies would get very friendly and actually start smooching!


Suffice to say that a good time was had by all of us that evening -- and even before all that much alcohol had been drunk, quite a bit of giggling and laughing broke out.  The human members of the party enjoyed ourselves drinking, dining and shooting the breeze.  The plushies looked to have had plenty of fun too -- but whereas Puppet Ponyo didn't actually imbibe (and was wide-eyed all evening), poor South African Teddy ended up looking on the soused side!

More than incidentally, I've known for a while now that I'm by no means the only person out there with a beloved plushie travel companion.  Certain people (including my German friend), however, have assumed otherwise -- or reckon that if there are indeed other people with Puppet Ponyo equivalents, they must be Asian like me!  But now here's furnishing proof that there's at least one non-Asian plushie travelling companion out there.  And for the record, not only has South African Teddy been to Hong Kong but it actually also had previously been to other places, including Norway and Egypt, before coming out East! ;b
Posted by YTSL at 8:56 PM

Ooops, sorry about that.

I shouldn't let Little My on the internet unsupervised ;o)

Hahahahahaha! Hmmm... even if the Little My in question isn't a plushie, is she at least a certain Finnish person's beloved travelling companion? ;b

BTW, I initially thought the first set of comments were from South African Teddy... who I'm wondering whether I should have described as "he" rather than "it"... ;)