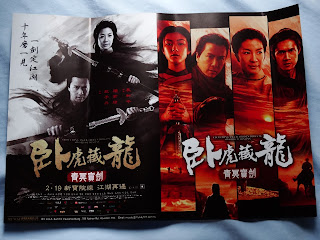 Does this look like publicity material for a film
shot in English to you? 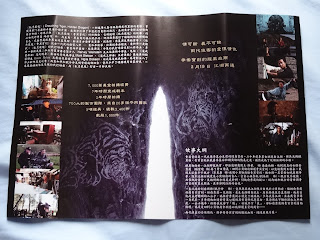 Back in the summer of 2000, I sat down and watched the wuxia work that would go on to win four Oscars, six (Taiwanese) Golden Horse Awards and eight Hong Kong Film Awards, among a number of other honors, in a cinema in Penang, Malaysia.  All told, I ended up watching Crouching Tiger, Hidden Dragon more than 10 (maybe even 20!) times on a big screen -- including in Philadelphia (where I then lived), New York (with the webmaster of Hong Kong Cinema: View from the Brooklyn Bridge), and Los Angeles (with the webmaster of the incomparable Michelle Yeoh Web Theatre).  And after it came out on home video, I watched this Ang Lee masterpiece on a DVD a few times over the years too!


So I think it's fair to say that someone like me would be expected to get pretty excited about the coming into being of a sequel to the impressive epic which introduced many non-Chinese people to the fascinating world of "martial heroes" who include women warriors and "flying" swordmen.  But factors such as it not having Ang Lee at the helm, being scripted by an American writer with not much of a pedigree and being filmed in New Zealand (rather than China, where Wang Du Lu's novels are set) made me leary about this new offering: whose story, set two decades after the events chronicled in the original Crouching Tiger, Hidden Dragon, again features people planning to steal the centuries old Green Destiny sword and Yu Shu Lien (Michelle Yeoh's character) fighting to make sure that it doesn't get into the wrong hands.

Then there's the matter of Crouching Tiger, Hidden Dragon: Sword of Destiny being shot in English and then being released in Hong Kong theaters with a Cantonese dub that reportedly doesn't include the voices of any cast members even though the likes of Michelle Yeoh and Donnie Yen are fluent in Cantonese as well as English.  (For the record: the movie also has been dubbed into Mandarin for its release in Mainland China, where it had its world premiere.)


After looking around in vain to see if any Hong Kong cinema was showing the original version of this 2016 film, I decided to go ahead and check out the Cantonese dubbed version of the movie helmed by veteran Hong Kong action director Yuen Woo Ping (who had been the action choreographer for the first Crouching Tiger, Hidden Dragon -- and also directed Michelle Yeoh and Donnie Yen in the fun Wing Chun back in 1994).  After all, I reasoned, it's not like I don't have any experience watching films dubbed into Cantonese; with Stephen Chow's Mermaid being the most recent example!

Although there's obviously a more marked disconnect in the lip movements when people dubbed into Cantonese were actually speaking English rather than Mandarin, this quirk in the film is something that isn't too jarring in many scenes -- particularly the action-packed ones but also a number which feature voiceovers, are shot in such a way that the faces (and, in particular, the mouths) of individuals don't loom large on the screen, etc.  However, I can't help but wonder how much my emotional response to the new movie has been affected by the voice acting not being done by the people seen on screen -- along with other factors such as its script, which (over-)ambitiously introduced a boatload of new heroes, heroines and villains into the martial mix.

On her way to commemorate the death anniversary of Sir Te, a respected relative of the Emperor who looked upon her as a member of his family, Yu Shu Lien is attacked by bad guys led by Wei Fang (Harry Shum Jr.), a young member of a powerful gang headed by Hades Dai (Jason Scott Lee).  A lone warrior (Donnie Yen) who had been tracking her movements comes to her rescue.  And after she realizes that Hades Dai is mounting a power play that involves getting hold of the Green Destiny, a precious sword whose whereabouts she's one of the few people to be privy to, and seeks help of her Iron Way (Jiang Hu) brethren to protect it, he -- who now goes by the moniker Silent Wolf but Shu Lien previously knew as Meng Si Zhao, her bethrothed -- steps in to help her once more.

At an inn located in the middle of nowhere, Silent Wolf finds formidable allies in Iron Crow (Roger Yuan), Silver Dart Shi (Juju Chan), Thunder Park (Woon Young Park) and Turtle Ma (Darryl Quon).  It's also there that Crouching Tiger, Hidden Dragon: Sword of Destiny really bursts into life with one of the best action scenes to be found in the movie; one which has the kind of action choreography that is innovative, infused with a sense of humor, features movements that look to have considerable power behind them, and bears the recognizable mark of director Yuen Woo Ping.

Not surprisingly, Donnie Yen stands out from the rest whenever his character goes into full action mode.  In contrast, Michelle Yeoh doesn't seem to be as well utilized in this movie; with her appearing to pose rather than act in some of the dramatic scenes, and coming across as being noticeably less powerful and graceful in her action scenes than I've seen her in past films (including the original Crouching Tiger, Hidden Dragon).

Most disappointing of all is not so much that many of the other cast members -- including Natasha Liu Bordizzo, whose Snow Vase character could be described as the successor in this movie to that played by Zhang Ziyi in the 2000 film -- often fare less well when in action mode but, rather, that the script makes it so that different people seem to suddenly have different fight capabilities from action scene to action scene.  More than anything, this aspect of the movie frustrated this long time fan of wuxia films, and made certain scenes (including an aesthetically impressive fight on ice) less believable as well as enjoyable.

Cutting to the chase: much as I loved the quality visuals and touching drama on display in Ang Lee's 2000 film, what really made it soar for me were the action scenes (notably the two which had Michelle Yeoh and Zhang Ziyi's characters pitting their wills and abilities against each other).  I also loved Tan Dun's score, which often made the fight scenes more exciting and the dramatic scenes more heartrending.  While echoes of it can be heard in this watchable but largely uninspired movie, those muted notes sadly only served too often to remind a fan like me of what was, and was (done) so much better some 16 years ago.

I can't decide if I want to see this or not. The thought of it being in English is off-putting, but seeing a dubbed version would be even worse.

I loved the original CTHD, although didn't see it in the cinema quite as many times as you did (only ten, I think). I always thought Zhang Ziyi got way too much credit for her relatively easy role of a spoilt teenager, while Michelle Yeoh spent a lot of time sitting quietly, expressing a huge range of emotions with barely noticeable changes in facial expressions. (I could talk about this all night, but I think I'll have to go and dig out the DVD now.)

If you get the chance to watch it on a big screen and in English, I say give it a go. Otherwise, you can give it a miss -- unless you have a curiosity about the film you need to satisfy!

And I completely agree about Zhang Ziyi vis a vis Michelle Yeoh in "Crouching Tiger, Hidden Dragon". I think Michelle Yeoh showed how good a dramatic actress she could be, not just an action actress, in that film. It's just too bad that she's not been able to impress as much since. To be honest, I think the problem is that she's become too obsessed with looking good rather than being good. Also, I miss the days when her characters (e.g., those in "Wing Chun" and "Police Story III: Supercop") could have some fun!

However that's not to say that CTHD - Sword of Destiny isn't a good movie. It's entertaining with lots of enjoyable action scenes and worth watching. Donnie Yen and his sidekicks are good actors and played interesting characters. I"d like to have seen more of the sidekicks. I did think Natasha Liu Bordizzo's and Harry Shum, Jr's performances were just average and Bordizzo's interactions with Michele Yeoh seemed flat.

I watched the movie on Netflix and was sorry that it's only being shown in a handful of theaters in the US because of, I think, Netflix's position that it open on Netflix and movie theaters on the same day. So the theater groups declined to show it.

I live in a rural area and would have driven an hour to see it on a "big screen" which I think it merited.

Thanks for your comments.

Like you, too, I did like Silent Wolf's sidekicks and wished we could have seen more of them. I think the actors who played them acquited themselves better than Natasha Liu Bordizzo and Harry Shum Jr -- who are both physically attractive but, sadly, don't seem to have the talent and presence that would have made their characters (which, after all, are only second in the film to Michelle Yeoh and Donnie Yen) resonate more with the likes of us.

I'm sad too that most people in the US will see this film "only" on Netflix. However flawed it is, it still really is a work that looks to have been made to be seen on a big screen.