Laughable Hong Kong cinema-themed attractions at the Garden of Stars 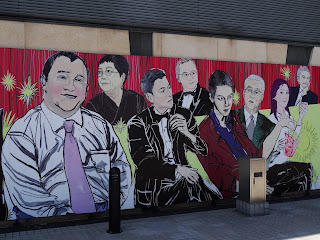 How many of these depicted Hong Kong entertainment
personalities do you recognize? 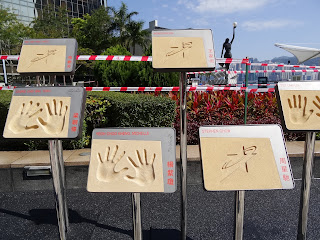 Why are the handprints of certain still living
Avenue of Stars honorees not available to be seen?


Last October, one of Hong Kong's most infamous tourist traps closed ahead of the effecting of a controversial three-year Victoria Harbour waterfront revitalization programme.  During this construction period, the statues of such as Bruce Lee and Anita Mui, and twenty of the star handprint plaques previously installed at the Avenue of Stars, have been relocated to the nearby area that's been  renamed Garden of Stars.


Today, the Hong Kong government announced that the revitalization programme is set to be simplified and the renovation plan to be reduced by half.  This means that plans for additional facilities at the Avenue of Stars, such as a proposed film gallery, have been cut.  It may not necessarily be a bad thing considering how badly pretty much everything that has been installed in this area has turned out to be!


Among other things: the original Avenue of Stars lacked helpful contextual information about many of the Hong Kong cinema personalities that the attraction was supposed to honor.  It also lacked sufficient shade and seating facilities to make a visit there, especially in the heat of a Hong Kong summer, all that physically comfortable.


In addition, it's manifestly evident both at this pale imitation of the Hollywood Walk of Fame and its temporary replacement, the Garden of Stars, how so many of the supposed handprint plaques of the stars lack, well, handprints!  While one can understand why this would be so in the case of those entertainment personalities who were no longer alive when the Avenue of Stars came into being in 2004, it looks to have effectively cheapened the whole affair that more than just a handful of the still living film folks (e.g., Stephen Chow and Wong Kar Wai) given the honor of a plaque at the location don't seem to have been bothered to put their handprints into cement there.


Something else that appears to be on the cheap side is the "Starlight Cinema" mural that was created for the Garden of Stars.  Sure, the scale of this 63-meter-long illustration which runs along a 360 degree wall is fairly impressive.  But even while many of the Hong Kong cinema personalities depicted on it can be fairly easily identified by Hong Kong film fans, a glance at the images surely will have one concluding that a far better artist could and should have been found for this installation that will be standing in a prominent location -- and seen by hundreds of thousands, if not millions, of people from all over the world -- for what looks to be at least a couple of years!


While perusing the Avenue of Stars' official website, I found mention that this "Starlight Cinema" mural was conceived by Law Kar and is "inspired by 17 classic scenes and featuring 43 movie characters".  Because I actually do respect Law Kar, I have to conclude that there's quite a big difference between his original conception and the completed work; with clues lying in such as his definitely knowing that the likes of Johnnie To and Ann Hui (whose caricatured portraits are included in the "Starlight Cinema" mural) are filmmakers rather than "movie characters".

In addition, I seriously doubt that any Hong Kong cinema scholar would have specified that the multi-talented Sylvia Chang be depicted with a monstrous-looking baby to commemorate her Aces Go Places character, and the characters they played in Heart of Dragon being those that look to have been identified as action stars Sammo Hung and Jackie Chan's most iconic.  As it was, these illustrations caused the two friends who happened on the Garden of Stars last week along with myself to burst out laughing at them, rather than be suitably impressed!
Posted by YTSL at 11:54 PM