The blessing(s) of dragons, lions and more this Chinese New Year 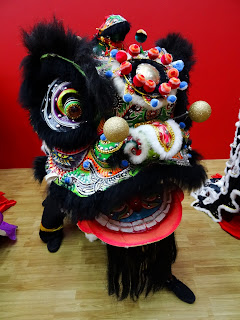 A Guan Yu lion on display in Times Square 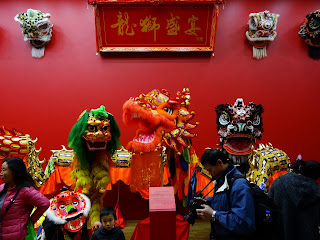 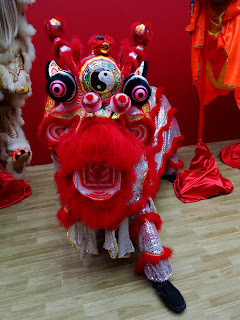 Is that a Qilin I see before me?  In any case,
it looks very Taoist as well as Chinese to me!


More than once this week, I've heard the drumbeats that I associate with lion dances echoing through various parts of Hong Kong.  Although I've not actually seen any of the lion dances I've heard taking place thus far this Chinese New Year, I can vividly imagine what they'd be like as a result of having viewed quite a few of these festive performances over the years -- live in territories as diverse as Malaysia, the US, Macau and Hong Kong as well as in movies such as Once Upon a Time in China I and III, and Just One Look.


Since moving to the Big Lychee, I've also been able to check out some colorful dragon dances -- both of the Tai Hang fire dragon and more "regular" Chinese festive dancing dragon varieties.  In addition, I've even spotted 'dancing' qilin (Chinese unicorns) -- which I had previously hadn't known existed! -- on parade in Shau Kei Wan on sea deity Tam Kung's birthday.


One year at the Tam Kung Birthday Parade in Shau Kei Wan, I also caught sight of some flat-faced costumed creatures that I found very exotic-looking and couldn't identify.  But thanks to The Blessing of Lion and Dragon special exhibition taking place in Times Square through to February 28th, I've got to figuring out that they're representations of the mythical Chinese creatures known as pi yao.

Together with the northern and southern lions, dragon and qilin, the pi yao are thought to be auspicious mythical creatures.  Actually, if one were to be specific: the northern lion represents joy; the southern lion represents longevity (of life); the dragon prosperity; the qilin blessing(s); and the pi yao (good) fortune.  So those behind the Times Square exhibition are effectively endeavoring to bestow the show's visitors with good vibes to start off this Chinese New Year.


To judge from the news headlines and reports this past week, people in Hong Kong sure could do with some auspicious cheer this year.  Among other things, the affair of the five missing booksellers appears to be heating up (even if remaining unresolved), the tortured soul-searching in the wake of (and fallout from) the 'fishball revolution' is continuing apace and the Hong Kong stock market had its worst start to a Lunar New Year since 1994.


I know that there are those who've already given up on Hong Kong's prospects for this year and those to come.  Increasingly, I've heard expats, some of whom have lived here more than 20 years, talking about wanting to leave Hong Kong and locals saying they wish they could migrate elsewhere (though certainly not to Mainland China!).

But here's something I still have for Hong Kong -- and wish I could share with many others of those who love and care for this place, and its society, people and culture, the way that I do: hope that there's still a better tomorrow in store for the Big Lychee.  And, of of course, if we/Hong Kong could also be showered with blessings and joy -- never mind fortune, prosperity and long life -- this year, all the better!
Posted by YTSL at 6:22 PM