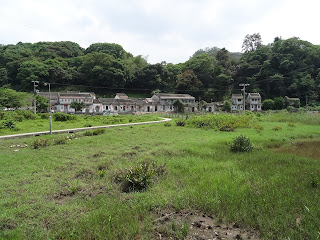 Six years before he directed the very English hit comedy Four Weddings and a Funeral, Mike Newell helmed the film adaptation of Hong Kong-born British Chinese novelist Timothy Mo's critically acclaimed Sour Sweet (note the slight difference in title between the movie and the book). Although it appears to have been little seen (with zero reviews and external links to reviews for its IMDB entry as of the time of writing), this drama has some really respectable names attached to it -- including novelist Ian McEwan as its scriptwriter and the multi-faceted Sylvia Chang heading its cast that also has character actor Soon Tek Oh in it.

The bittersweet tale of a family with roots in Hong Kong's New Territories whose members, like so many of their contemporaries, left their home village for what they hoped would be a better life in the UK several years before the Handover, the film begins with colorful scenes taking place in what appears to be a mix of locations -- in that I saw what appeared to be Starling Inlet and the narrow road along it but also a quick shot of the Sai Kung Peninsula's Sharp Peak!

Wherever the actual location, the locale in question is the setting for the wedding day of Lily (Sylvia Chang) and Chen (Danny Dun), the latter of whom also proudly announces at the wedding banquet that he's been given the right to reside in Britain.  While I would have loved for the film to spend more time in Hong Kong, Soursweet soon moves to London and a time a few years on, with Chen now working as a waiter in a Chinese restaurant in the British capital city, Lily and her sister Mui (Jody Long) cleaning houses, and Chen and Lily now the parents of young Man Kee (Speedy Choo).

While Lily and Mui remain spirited, Chen now appears to be a pale shadow of his former self -- less confident and more socially withdrawn.  Clearly out of his element, he also ends up sinking into debt as a result of a foolish attempt to make money quickly by gambling because -- how ironic and sad is this -- he needed funds to settle his father's gambling debt.  Even more foolishly, he gets his and his father's debts settled by Triad "friends" (among them a senior gangster played by Soon Tek Oh) who then, of course, want him to do them a big favor: specifically, act as a regular drug courier for them.

Unwilling to do what they want, Chen moves with his family to an out of the way place where he hopes that the Triads will not track him down.  Since they need to make money, they go ahead and open a Chinese takeaway -- which, against the odds, actually does get quite a bit of business.  But as its title gives away, every bit of sweet success and happiness that occurs in this story gets "balanced" out with dollops of sour, even bitter, fruit.

I'm not sure if it was deliberate but Danny Dun -- at least in the film -- has one of those faces and built that fits the Western archetype of the physically unattractive Asian male. Similarly, Jody Long is -- to put it nicely -- perfect to play a plain homely female.  But while Sylvia Chang has suffered from unkind comparisons -- with regards to her physical appearance -- to Chinese film contemporaries, notably Brigitte Lin Ching-Hsia, her beauty as well as star power shines through in, and illuminates much of, Soursweet.

Although she is first billed in the film, the drama actually focuses more on Dun's character than Chang's.  At the same time, it's also true enough that Soursweet would be a lesser as well as much generally sadder film if Lily -- and also Mui and Man Kee -- hadn't figured in it.  Consequently, the film owes a large portion of its palatability to Chang and Lily even while serving up doses of realistic tragedy in Chen's story.

I read several of Timothy Mo's novels many years ago including the one Soursweet is based on. He's an excellent writer and though his novels are dark I enjoyed them. I'd be interested to watch this movie.

Timothy Mo's novels are hard to find in these parts. I came across a copy of "Soursweet" at the used bookstore in Mui Wo but haven't been able to find "An Insular Possession", which really sounds like it'd be an interesting read.

Re the movie: it's one I've wanted to view for years and am really glad that when I finally did, it was on a big screen. The early scenes that take place in Hong Kong are ever so atmospheric -- and help me better imagine what many of the New Territories villages I pass by on hikes looked like in the past. :)

Haven't seen this film, but I want to now. I'm casually familiar with Sylvia Chang, but after reading your Wiki link on this post, I'm astounded at the achievements of this versatile woman.

I consulted the old reliable, BRNS, and read about this "Renaissance woman". I know her from Eat Drink Man Woman (my favorite Ang Lee film, much better than his later big production glossy films). And it floored me to read that she worked as assistant director to King Hu in Raining in the Mountain!!

Sylvia Chang's got a small but great part in "Eat Drink Man Woman" but she's definitely so much more. In terms of her directorial efforts, I'd recommend "Temtping Heart", for her starring efforts, "Shanghai Blues" and "Queen of Temple Street".

Also, I've got a double CD of hit songs sung by her -- and particularly love the song she sung that can be heard on the Mandarin dub of "Three Summers". There's a video clip of that version here (and yes, the visuals are great too):-
https://www.youtube.com/watch?v=BNFTLMwAlgc

(The music starts after a minute elapses)

Thanks for recommending Sylvia Chang's "Three Summers" on YouTube. I did enjoy this video and the scenes on Lantau...Also enjoyed watching her video of "Tempting Heart" and others.

You're welcome -- and re that videoclip: it's actually from the end section of "Three Summers", a drama directed by Lawrence Lau (aka Lawrence Ah Mon) and produced by Sylvia Chang.

Re "Tempting Heart": it's a really lovely movie. Did you watch the clip with Sylvia Chang looking at the photos taken by Takeshi Kaneshiro's character? It never fails to get me teary-eyed! ;b

You asked if I watched the clip with Sylvia Chang looking at photos taken by Takeshi Kaneshiro's character. I did. In fact, I then watched the entire movie on YouTube, without subtitles.

Wow re your watching all of "Tempting Heart" on Youtube without subtitles. Try to watch it on DVD, if not on a big screen, with English subtitles if you can!