Kon Ichikawa's Tokyo Olympiad viewed on a big screen -- as it deserves to be! 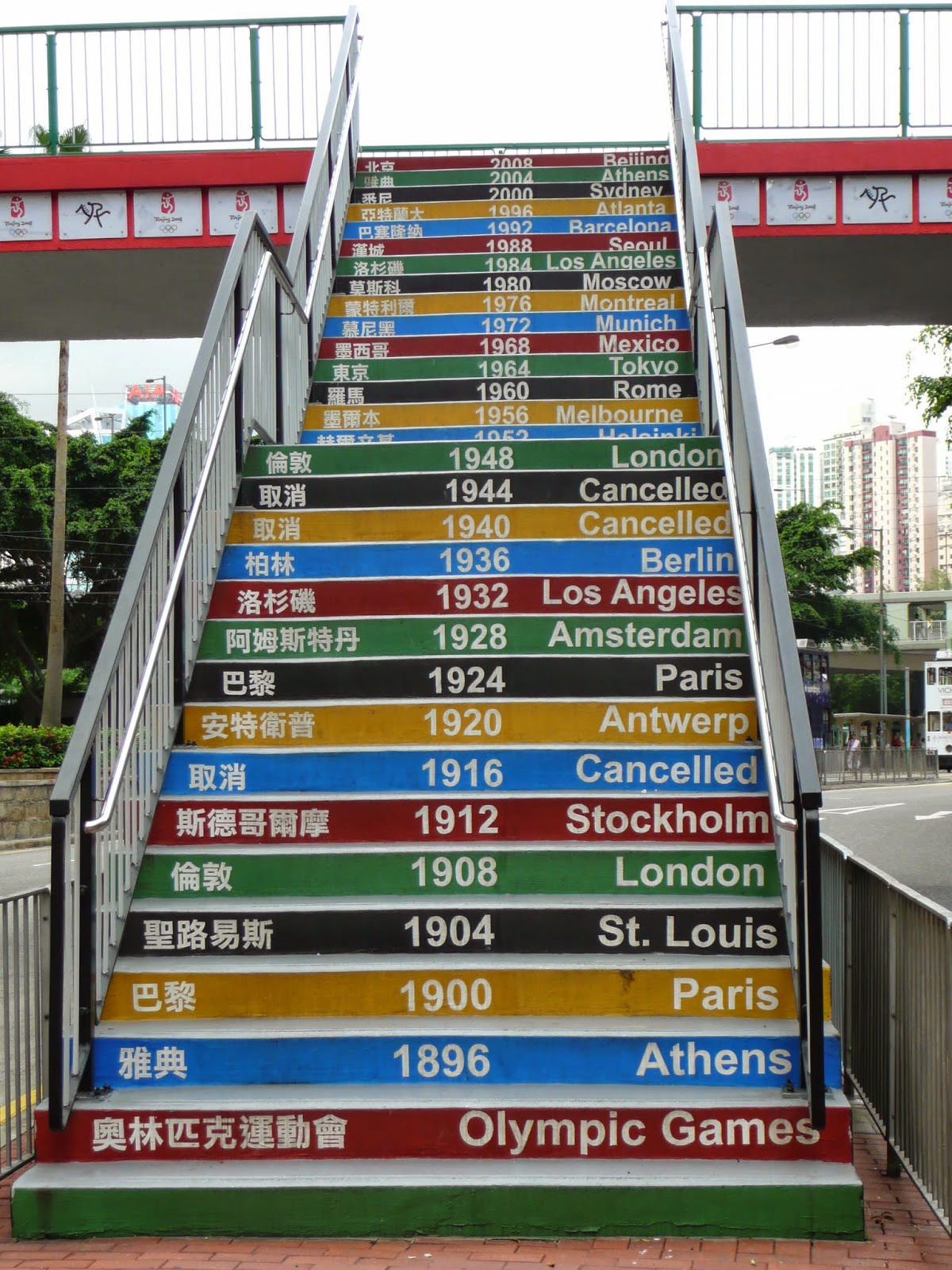 These steps are part of the Olympics-themed
overhead bridge in Causeway Bay :)


This chronicle of the first Olympic Games to take place in Asia has been hailed as one of the best sports documentaries of all time -- and I knew it was going to be really special when its first few minutes of footage made my heart swell and tears roll down my cheeks.


Kon Ichikawa's Tokyo Olympiad is a monumental film with a 170 minute running time and images that are wonderful to behold on a big screen.  At the same time, it possesses great humanity, with plenty of close-up shots -- of athlete's faces as they wrinkle in concentration (and, observes the narrator, look sad!), beam with pride and such, and also audience reactions that show that those watching are also part of the event and experience as a whole.


Although it of course mainly shows scenes that unfold in Tokyo, the documentary begins with a recounting of where and when previous Olympic Games took place that includes mention of those games that were cancelled in 1916, 1940 and 1944 because of world wars taking place at the time -- and mention that Tokyo was scheduled to host the 1940 Olympic Games but was only doing so for the first time in 1964.


Next, come images of the Olympic torch relay that began -- as they all do -- in Greece and then wends its way through various countries that in 1964, includes Asian countries for the first time ever.  Those images -- that include from scenes in India, Burma and Hong Kong -- are incredibly evocative, and some of the Japan ones take your breath away with their beauty and also emotional power; as do the scenes that follow of the Opening Ceremony.

Almost needless to say, the bulk of the film does show sporting events -- with athletics and the Americans dominating for a time.  To be honest, it's quite shocking several decades on to see how American and white many of the winning athletes were back in 1964 -- and it actually comes as a relief when the focus moves beyond athletics and to sports such as judo and women's volleyball, where the Japanese come to the fore.

Part of the great triumph of Tokyo Olympiad though is how it really isn't jingoistically home nation focused -- in a way that coverage of the Olympics often become.  (I remember being particularly appalled watching the 1986 Olympic Games in the US and seeing how for the broadcasters and also much of the audience I was watching, the accent was more on Americans triumphing than admiring sporting prowess regardless of where the sportsman or -woman came from.)

Tokyo Olympiad also is an unconventional sports documentary in such as the choices of angles to film certain events -- with certain scenes being shown in black and white, others in photo format, and still others being shot in such a way that the focus becomes on such as the feet and particular rippling muscles that the overall action can get obscured.  In any case, the bulk of the images shown are fantastic -- and the narrative that connects them is just right.  Put another way: this really is the work of an auteur, not a journeyman filmmaker -- and all the better for it!

I'm glad to read that this classic documentary is being shown on the big screen. I saw this years back and I recall it being in widescreen (cinemascope) and quite a memorable film. Well, I do love the Olympics (all the events, but especially track and field) and look forward to seeing this again.

I have a double dvd of CCTV's broadcast of the opening and closing ceremonies of the 2008 Beijing Olympics. From a technical standpoint, I doubt if these ceremonies will ever be surpassed (most countries couldn't afford it).

Leni Riefenstahl's filming of the Berlin Olympics (1936), Olympia, is my favorite because of the innovative and influential camerawork.

You remember correctly re "Tokyo Olympiad" being in widescreen. Really cool, eh? :)

I watched the opening ceremony of the 2008 Beijing Olympics but couldn't be bothered with the closing ceremony. These days, the ceremonies seem too long as well as extravagant!

Re "Olympia": I'm holding out for the possibility of seeing that on a big screen... ;)