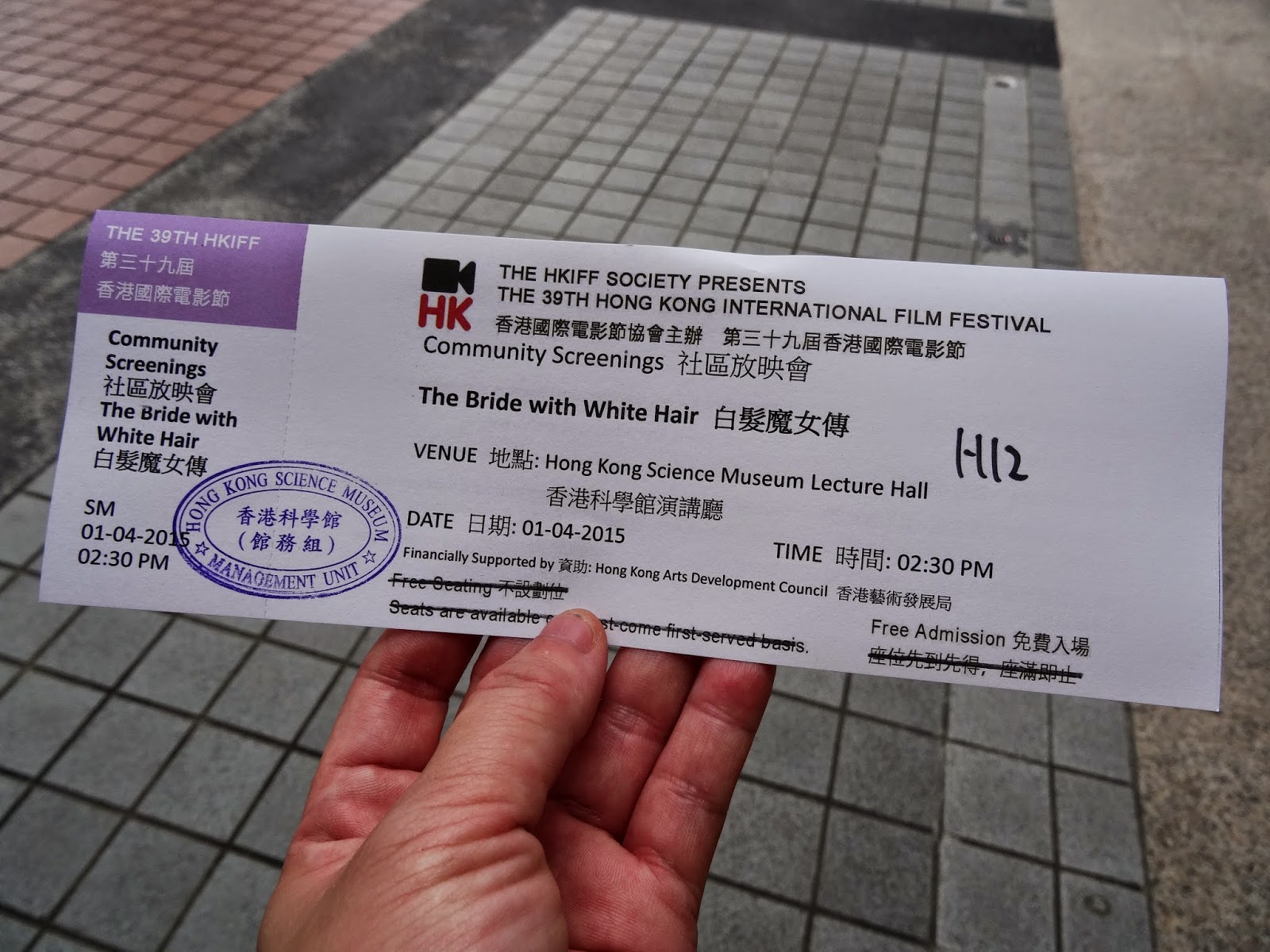 A prized ticket that money can't buy; instead, it was one
that I queued up for more than one hour to get my hands on! 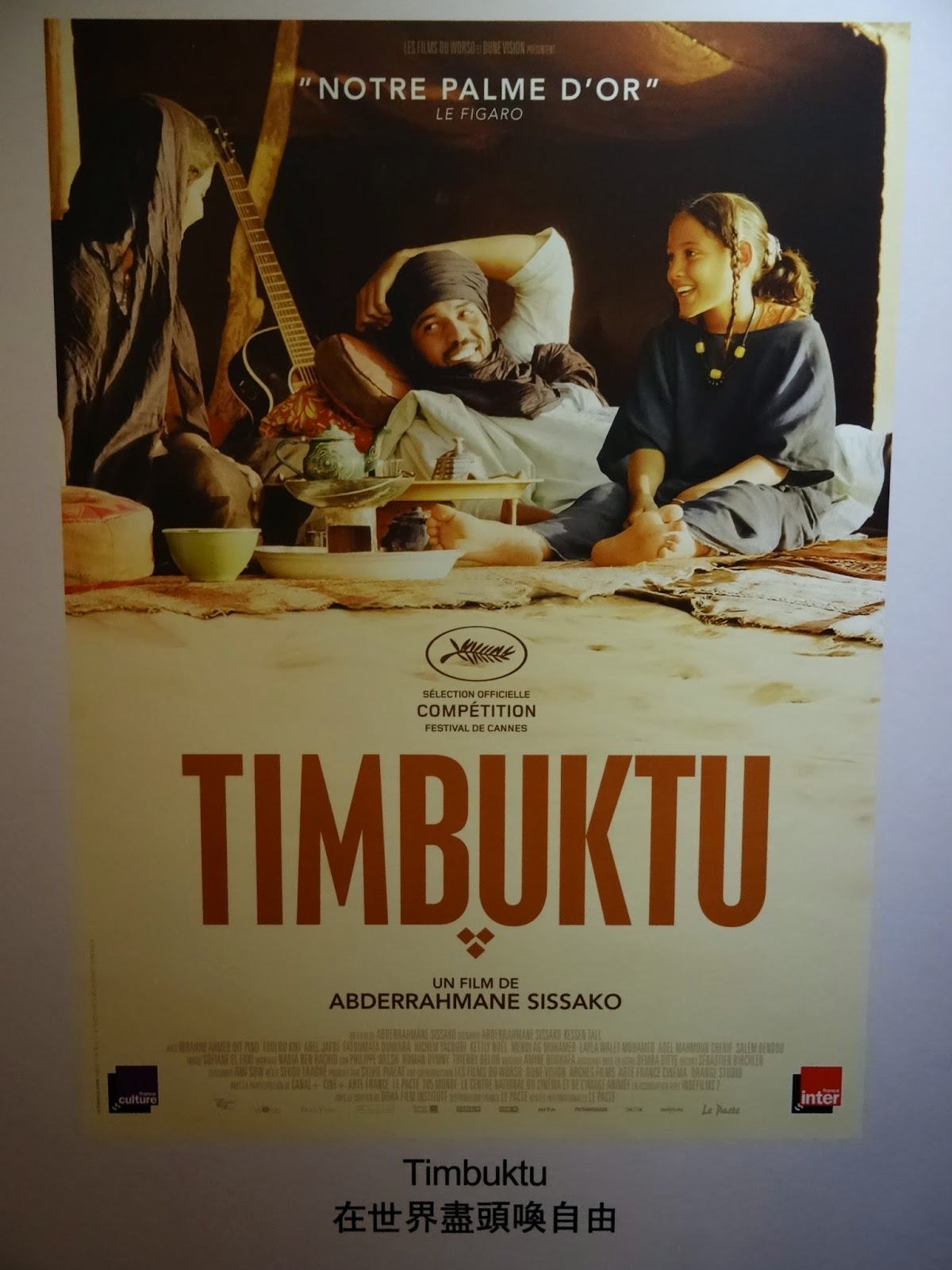 This film's screening, on the other hand,
I did pay to get into! ;b

The 39th Hong Kong International Film Festival draws to a close this evening.  Before that, I plan to check out two more of its offerings -- bringing my total HKIFF viewing to 19 films (with my also having viewed Two Thumbs Up, one of the few 2015 Hong Kong films screening at the fest before the HKIFF's opening, and seven of the eight entries in this year's Hong Kong Panorama section, including My Voice, My Life, Overheard 3, The Golden Era, Dearest, Sara, Kung Fu Jungle, and McDull: Me & My Mum).

All bar one of the films I've viewed at this year's HKIFF I had never seen before.  The one exception to the rule is a movie I've seen more than 10 times on home video and had viewed once on a big screen in New York more than a decade ago now courtesy of the Subway Cinema collective.  But there's no way that I wasn't going to check out The Bride with White Hair on a big screen on April 1st (not so much of April Fool's Day for Leslie Cheung fans as the anniversary of his tragic death) -- and while I may have been the only one in the theater who was there primarily to see Brigitte Lin Ching-Hsia on a big screen rather than her co-star, I think I can safely say that everyone adored what they saw that afternoon, especially as the copy of the film shown was so beautifully free of wear and tear!

For the most part though, the 2015 Hong Kong International Film Festival has been one which has allowed local cinephiles to enjoy watching films from elsewhere in the world -- and while I'd love to see more Hong Kong movies at this fest, I have to say that the international selection I've opted for have generally proved to be worthy viewing, including the following offering:-


At lunch with a friend visiting from the US earlier in the day, the two of us told each other what HKIFF screenings we planned to check out later.  When I mentioned Timbuktu, despite it having been one of the five shortlisted nominees for this year's Best Foreign Language Film Oscar, she told me she had never heard of it -- and what's more, didn't know where the city the film's named after (and is mainly set) is.


Later, while sitting in the Hong Kong Cultural Centre's vast Grand Theatre, I wondered how many of the other audience members there for Mauritanian filmmaker Abderrahmane Sissako's drama depicting life in a historical center of learning under the rule of foreign jihadists had a personal connection to Timbuktu and Mali, the West African country that it's located within -- and if they did, whether what they saw unfold on the screen was as heartbreaking as it was for me.


In what can seem like another lifetime, I got to know a gentle soul from Mali -- one who, like some (but not all) of the residents of Timbuktu seen in the film has beautifully dark skin and, like at least one of the people in this drama, lovely long eyelashes.  Something else that my friend shares with many of the Malians in Timbuktu is a love of music -- and so it was particularly sad as well as ridiculous for me to see that life under the jihadi was one where music was haram along with such as adultery and women going about in public without covering their heads, faces, hands and legs while men, conversely, were told that their trousers should be several inches shorter than had hitherto had been the norm in the area.


The Timbuktu shown in this visually arresting film is one that will strike Hong Kongers (and also Americans, etc.) as exotic.  Buildings made out of baked mud -- rather than, say, concrete or wood -- are the norm in this UNESCO World Heritage Site, some of the pathways in the town are so narrow a donkey with a load of twigs has problems passing thorugh them (forget the thought of a car going along them), and the surrounding desertscape is one that looks both beautiful and intimidatingly bare.

At the same time, what struck me most about Timbuktu is the humanity of many of the people in it -- with even the jihadists, notably their leader Abdelkarim (Abel Jafri), being shown to be humans rather than caricatured characters falling on either side of the divide between good and evil.  Still, this is not to say that everyone is an admirable personality -- this not least because, as this multi-layered offering makes clear, the belief that you're doing God's work (and for those who didn't realize, Allah's just another name for the same God worshipped by the Christians and Jews) does not stop people from being misguided, culturally insensitive and ignorant, and just plain brutal.


Something else that director-scriptwriter Sissako (and co-writer Kessen Tall) confirm in this work is how no man is an island: with even cattleherder Kidane (Ibrahim Ahmed dit Pinto), his wife Satima (Toulou Kiki) and their young daughter Toya (Layla Walet Mohamed), who live out in the desert miles from everyone else -- their neighbors, we are told, have moved away to areas not under the hands of the jihadi -- unable to escape the oppressive web cast over the area by their fellow Muslims who are not indigeneous to the area.


There's no denying that Timbuktu's tale is a sad one. However, we can take heart in the jihadists no longer being in control of this ancient city that this rich film's named after and its surroundings.  Another positive that I hope people will take from a viewing of the complex drama is that humanity and Islam can indeed co-exist. In particular, I came away from the screening wishing that there were more people out there like the local religious elder in Timbuktu and, also, that his way of interpreting Islam could be more loudly and widely heard and practiced.

Great coverage of the HKIFF as always, YTSL! Will you be writing a review for Song of the Sea?

I wondered whether you'd be reading my movie reviews! And yes, will be reviewing "Song of the Sea" -- along with the remaining films I viewed at the HKIFF that I've yet to write about. ;b

I had not been able to get any tickets to movies that I want to see, many of which (European movies) I thought would not appeal to the local audience. Many were sold out so early and I didn't know you could still queue up to buy the tickets, or do you mean you got them a while back but that you still had to queue for an hour? I hope many of these movies will be shown around town after the HKIFF.
Sophia

The movies I had wanted to see were:
1989
Force Majeur
Human Capital
I want to see the manager
That day on the beach
Labyrinth of lies
Timbuktu
Do you know if they will be shown after HKIFF?

There were a few screenings, including for "The Bride with White Hair", with special ticketing arrangements -- if you look at the ticket in the top photo, it says it's free.

Interesting that you say that a lot of screenings were sold out. It looked like a lot less than in recent years for me. Two things for future reference: 1) At the Hong Kong Cultural Centre and City Hall, there are standby tickets - like with live performances there; and 2) It's really hard for the Hong Kong Cultural Centre screenings to really sell out since the Grand Theatre used there has over 1,700 seats.

Re films that you want to see: I think "Human Capital" is scheduled for a general theatrical release and "That Day on the Beach" is available on DVD (with English subtitles). Don't know about the others though -- sorry.

Thank you YTSL. I will take note for future reference.
(SPOILERS)
Separately I read your review of "Little Big Master" in the SCMP. I think I was the only person in the movie that didn't cry. I had heard the interview with the real life principal on the radio and knew that the school is now thriving so the final scene didn't do anything for me. In fact I found it manipulative. How do you as a professional handle this situation, knowing the facts and they didn't tally up with the movie? (Yes the credits did explain the current situation)
Sophia

Well, I never expect reality-based movies to be 100% true to reality -- much as I've learnt that movie adaptations of books don't 100% conform to the stories in print. Something I noticed for "Little Big Master": the name of the headmistress in the movie is not exactly the same as that of the real-life headmistress that the film character is clearly -- but not completely -- based on.

In general, I find that it's best to see a film and then read about what it's based on or the book that it's adapted from, rather than the other way around.

I especially enjoyed reading this post because you mention "The Bride With White Hair"...I would love to see this one in a theatre one day rather than have to watch the dvd. Honestly, I thought Brigitte Lin's charisma kind of overwhelmed Leslie Cheung's presence in the film. It is the ending which always disappoints me because it is over-the-top, too much like a cartoon.

There are positive things concerning film that are happening in Hong Kong. I recall reading in FilmBizAsia that L'Immagine Ritrovata Film Restoration Lab is opening in HK this month. The article mentions restored versions of A Better Tomorrow, Comrades Almost a Love Story and best of all, A Touch of Zen!

"The Bride with White Hair" is really a visually sumptuous film that deserves to be seen on a big screen. And yes, I agree -- I think that Brigitte Lin's charisma stands out more than anyone else's in that movie. :)

Re the ending: I've described some of the actions as looking like that of a human pinball -- and yes, the movie does have flaws. But boy, does it have amazing moments too!

Re the L'Immagine Ritrovata Film Restoration Lab's opening in Hong Kong: I'd love to see what they produce in the next year or more! :)