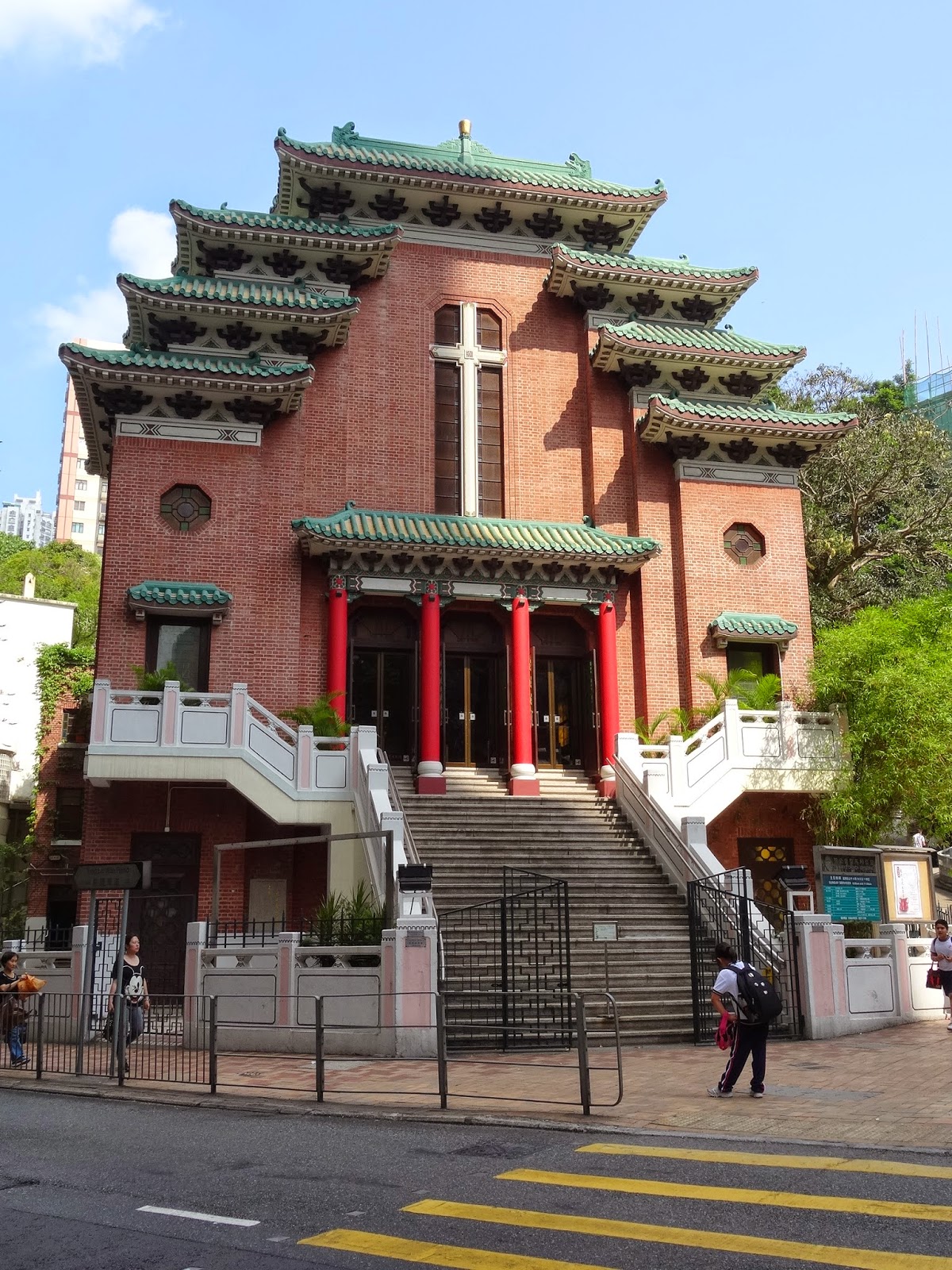 One of the more interesting looking churches
I've seen in Hong Kong -- or anywhere, for that matter 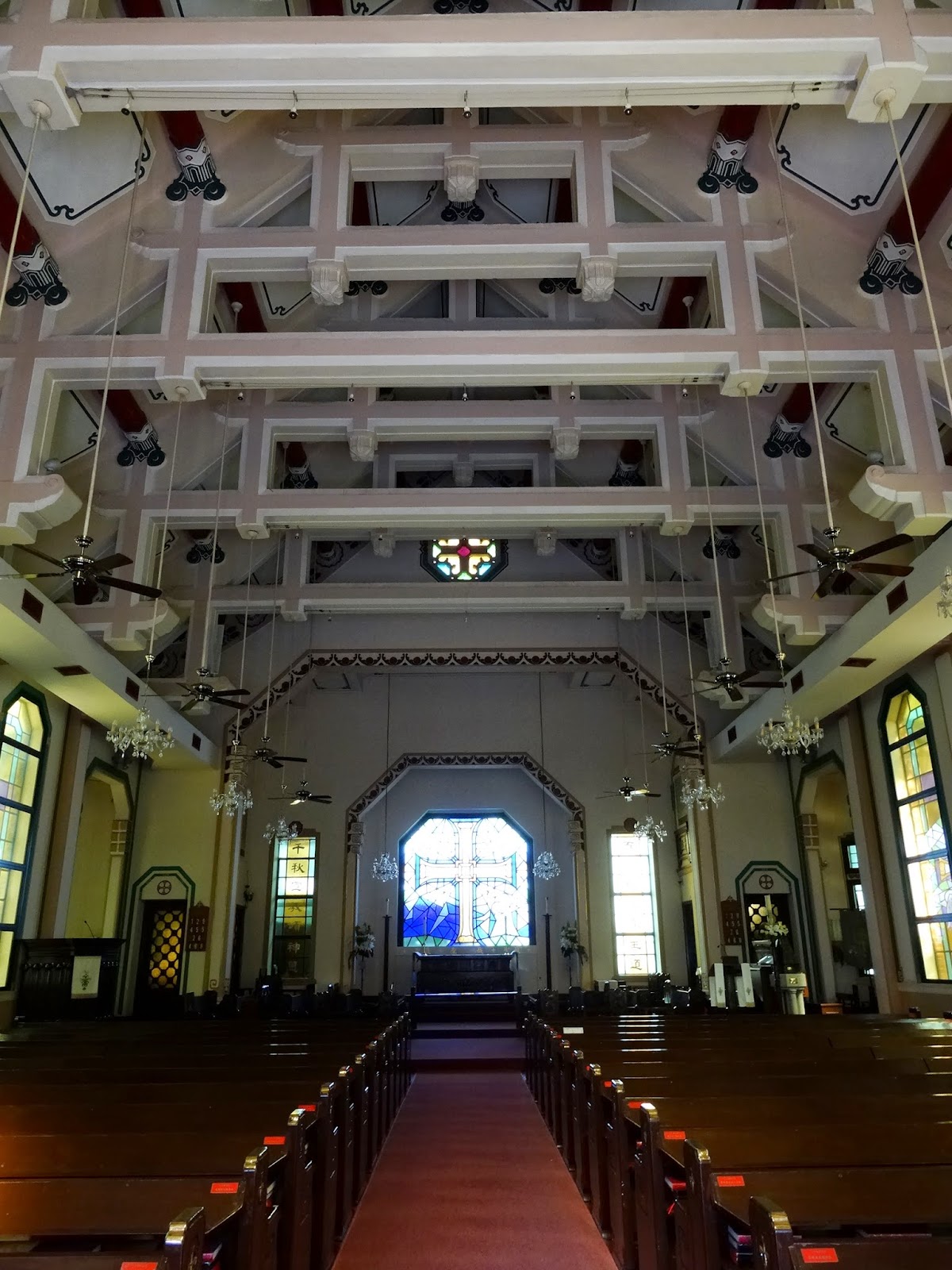 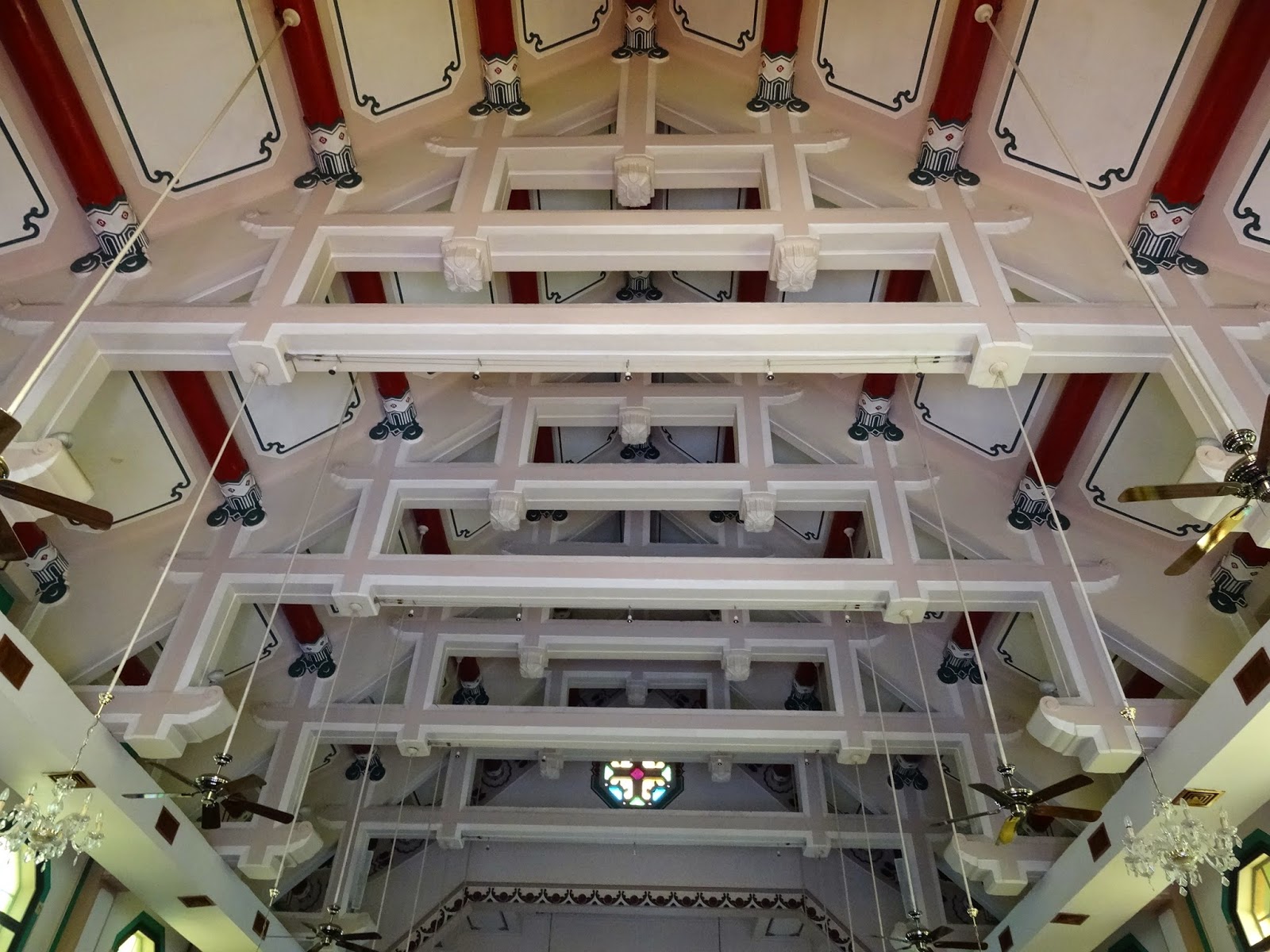 In particular, I really don't believe that I've seen
a church ceiling that looks like this before! :)


As long-time readers of this blog know, in addition to hiking in the Hong Kong countryside, I also do enjoy strolling around and checking out various sections of urban Hong Kong.  When doing the latter, I particularly enjoy seeing older -- rather than newer -- buildings that exude character and color, and have to date thankfully managed to steer clear of the wrecker's ball.


Probably not coincidentally, a high percentage of these interesting-looking older buildings tend to be places of religious worship.  And while the majority of them are Taoist temples, one of the religious buildings I've long considered one of the most fascinating in Hong Kong actually is an Anglican church.


Opened for service on Christmas Day, 1937, the St Mary's Church located in the section of Causeway Bay close to Tai Hang -- whose full formal name appears to be Hong Kong Sheng Kung Hui St Mary's Church -- was built to serve the congregation of a church first established in 1911.  As described on the church's website, "a new, beautiful and imposing Church of Chinese-Anglican architectural design, reborn from the old church out of its extended old site, stood elevated on a flight of granite steps, bearing a snow-white Cross, and beckoning, as it were, to her portals to all willing comers."


After reading in Jason Wordie's Streets: Exploring Hong Kong Island about this building
designed by Franco-Belgian company Credit Fonciere d'Extreme Orient "to look as Chinese as possible, so lessening the cultural gap between the Christian religion and the everyday Chinese, I went about hunting for it and, upon finding "one of Hong Kong's most eclectically styled buildings -- religious or secular -- tucked away on an obscure backstreet corner in Causeway Bay", will state that it's the kind of sight that is so unusual that it makes you want to rub your eyes to make sure that you're really seeing what you're seeing!


But while I've passed by it several times now in the years since, I had never had the opportunity to venture inside this fascinating-looking building -- until today, when I spied on a post-lunch stroll that it was indeed open!  Eager to take advantage of the opportunity, I bounded up its steps and entered into a space that, while sharing certain commonalities with other churches (such as an altar, pews and an organ, albeit modern electric rather than traditional pipe ones), also most definitely had cool elements that appear to be entirely its own.

Both the inside as well as outside of St Mary's Church are designed in the syncretic style known as "Chinese Renaissance" (a notable secular example of which is the King Yin Lei mansion), one that has noticeably Chinese design elements but also Western ones.  In all honesty, if I had not read about it, I would not have thought that this building had been designed by Europeans.  And it's interesting (but logical, given the ethnic composition of its congregation) that I saw much more Chinese than English (or any other Western) writing inside this church whose denomination is nonetheless Anglican (AKA  Church of England)! ;)
Posted by YTSL at 7:20 PM

I'm familiar with the exterior of this church via my copy of the Jason Wordie book you mention. However, your blog is the first time I've photos of the interior of the church...People may agree or disagree whether the East and West can truly meet, but at the very least, this church is an interesting example of fusion architecture.

The mix of East and West can sometimes result in strange architectural structures -- but I think this church is one that is more inspired than weird. ;b

Its a beautiful church :) Love your pics and write-up.

Thanks for visiting, looking and reading. Funny but this is one of those buildings that even many people living in Hong Kong don't seem to know exist. :)