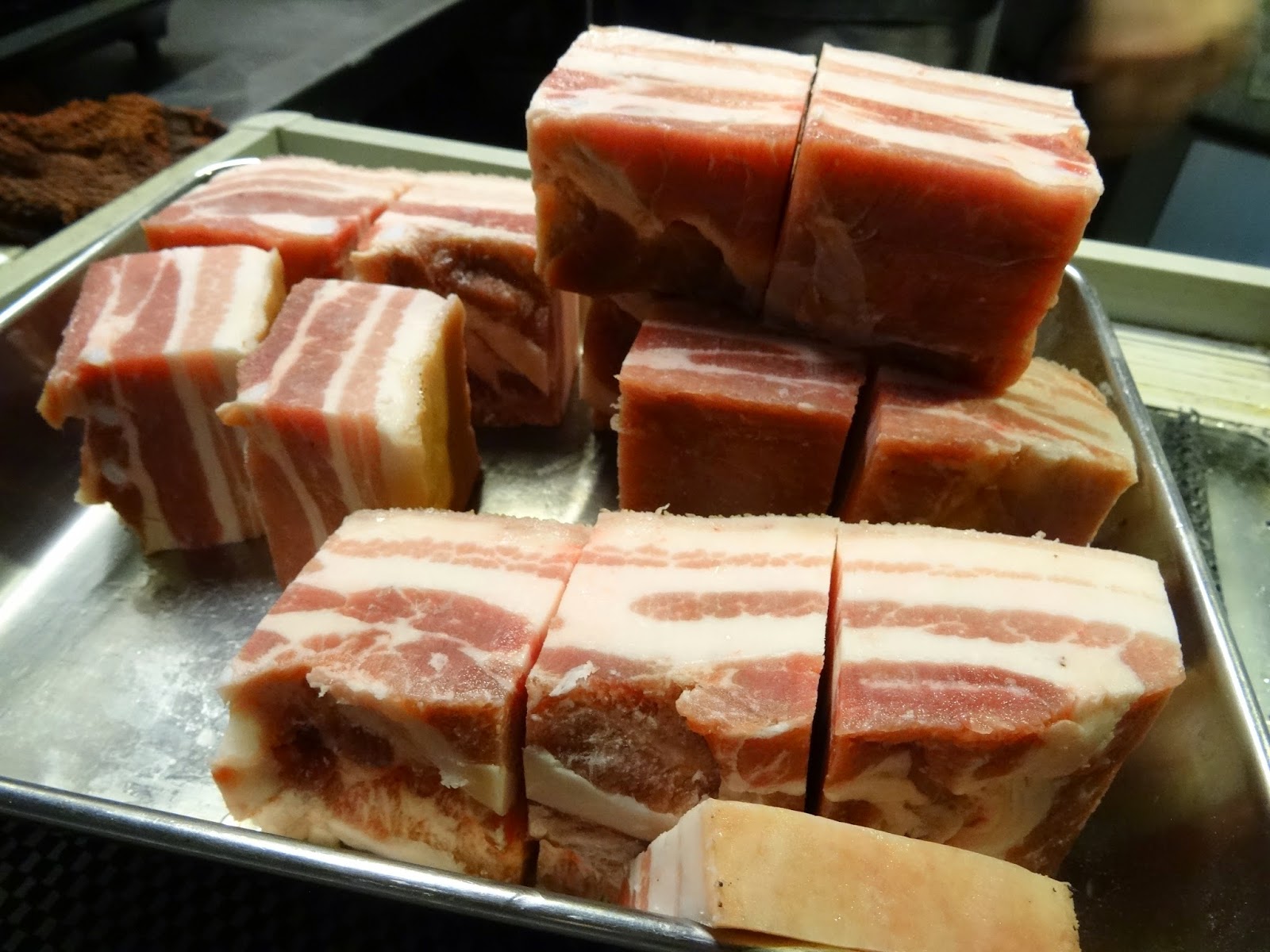 Vegans and vegetarians -- avert your eyes from this sight! 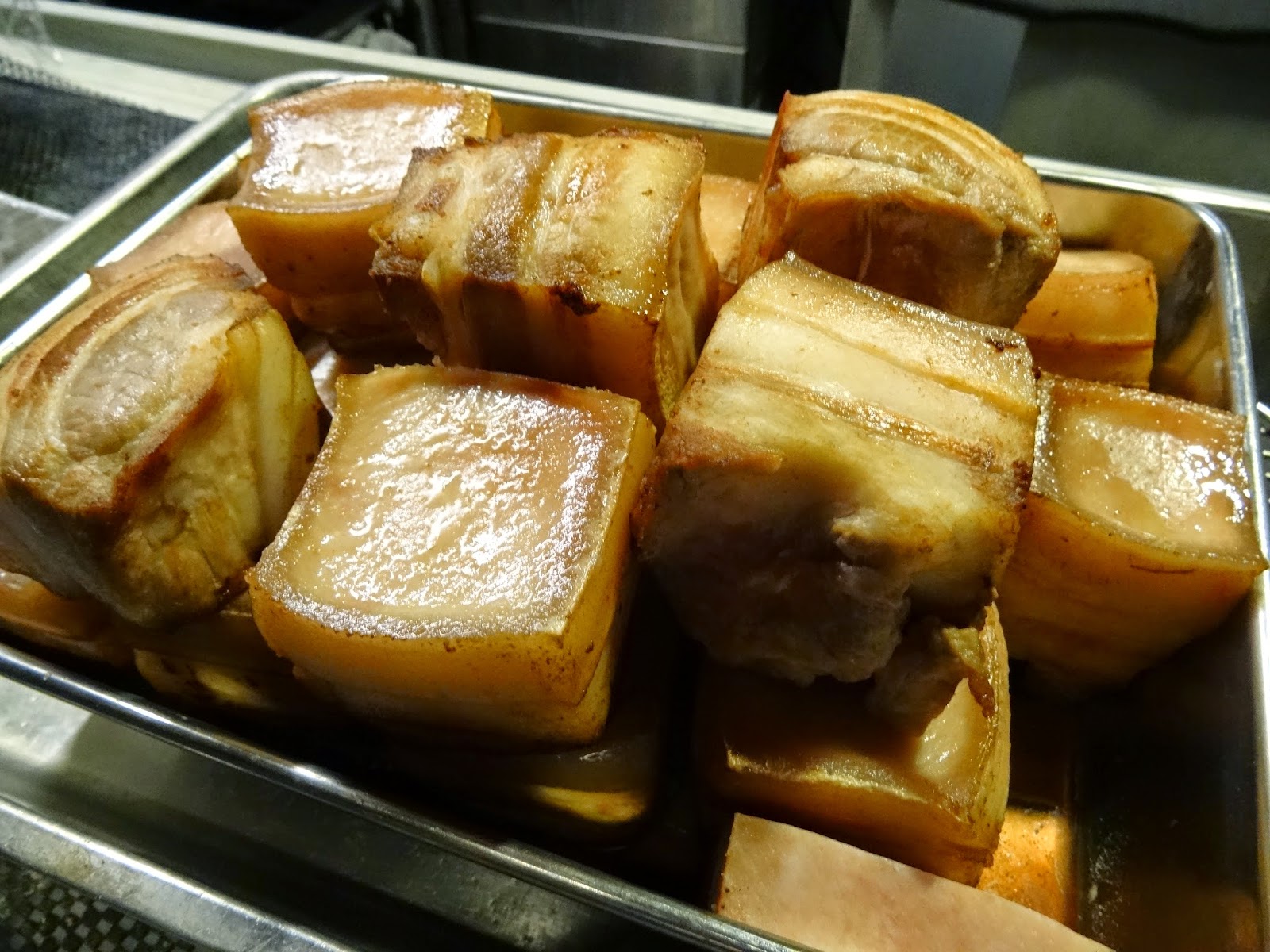 Omnivores and carnivores -- enjoy the sight of these
generous chunks of pork belly post stewing with sake ! ;b 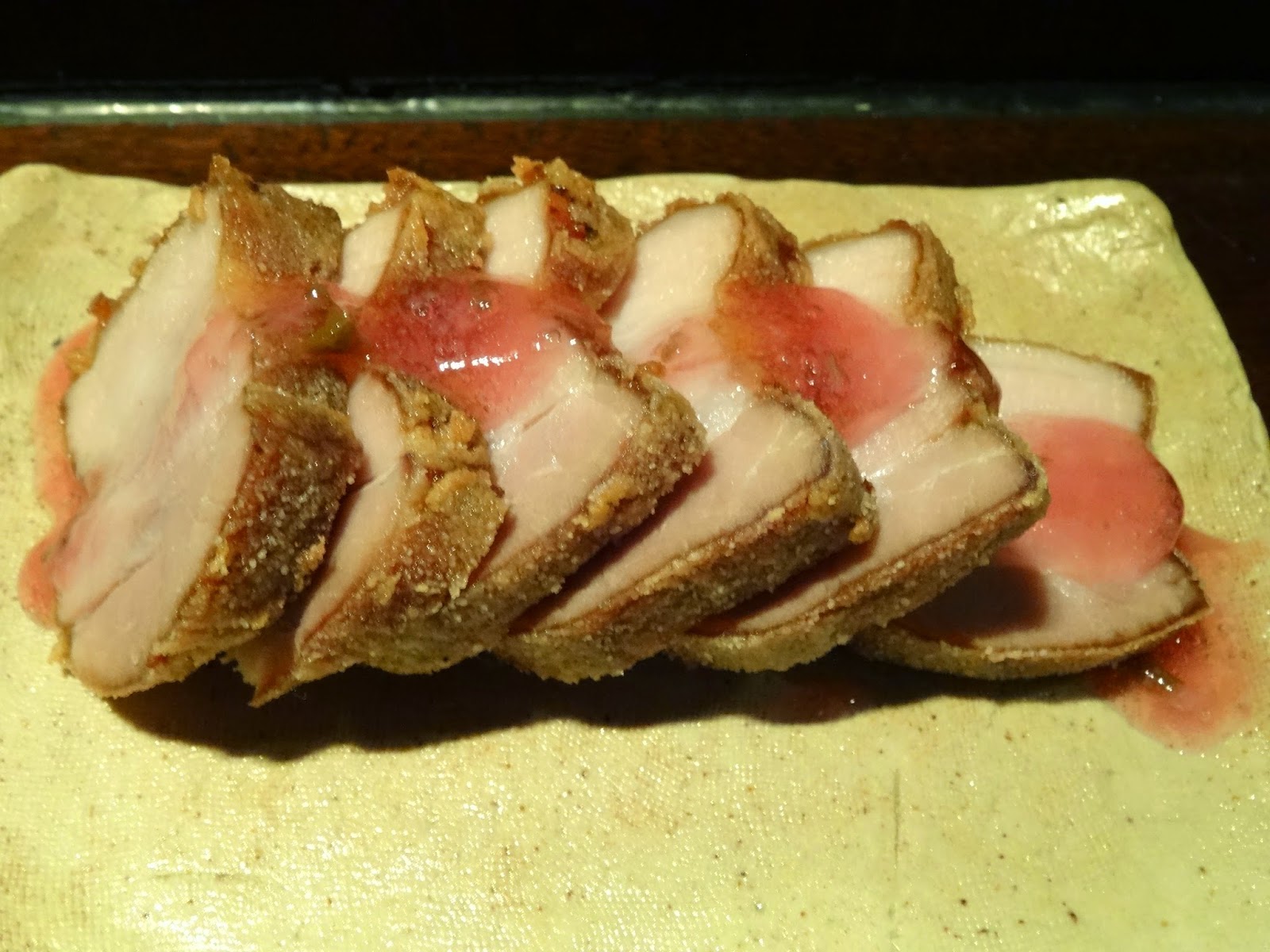 Decades ago when I attended an English boarding school, a joke ran that we could only tell what kind of roast meat we were served by the sauce that it was served with.  For example, mint sauce on the table was a sign that we were getting roast lamb, apple sauce meant that we were eating roast pork and so on and so forth.

Little did I know then that years later, I'd be living in a society where not only are people very aware and particular about what kind of meat they eat -- but also what cuts and sections of the animal!  But that's indeed in the case in Hong Kong, whose culinary traditions include nose to tail cooking and eating, and where pork neck, pork knuckle and pork belly are among many people's favorite foods!

After some eight years of living in the Big Lychee, not only am I a fan of pork belly but I have favorite places to eat this particular cut of pig meat.  One of these is the place that also happens to be my favorite bar -- Sake Bar Ginn, where the food is something I enjoy along with the libations!

Among chef Billy's specialties is the sake stewed pork belly which I find hearty and flavorful, and particularly great to eat in cool weather.  Available all year round on the regular menu, it was one of the dishes I decided to order on a visit there earlier this month -- which started off being unseasonably warm but then noticeably and very enjoyably cooled down again for a couple of a weeks.

But although it was indeed available if I so insisted, Billy suggested that I try an "off menu" variation which happened to be on offer that evening: fried pork belly!  Despite my trepidation that it would be cardiac arrest-inducing, I decided to trust him and go for it -- and boy, was I glad I did when I had a taste of this deliciously prepared meat!

Thanks -- Billy later explained -- to its accompanying sour fruity-tasting sakura dressing, the fried pork belly appeared deceptively light and not super fatty.  But midway through my devouring the dish, I started burping -- a development I took to mean my stomach telling me that it was getting fuller faster than I thought was the case!

Fortunately, both the Japanese and Hong Kongers are among the people who don't think that burping is inherently bad mannered!  So I was able to feel no shame at my burping as well as no guilt at all for having consumed such delectable fare!  And lest there be any doubt: yes, I definitely would order another portion of Billy's fried pork belly again; just not that same evening, as one portion -- along with an order of some other tapas-side dish (in this case, the goma ae -- spinach with sesame sauce and seeds) and a few drinks (but of course!) of sake -- is plenty filling enough for me! ;b
Posted by YTSL at 9:49 PM

Thank you! I share this to my facebook, and I wrote this down "Thank you so much, Yvonne.
Sometime, when I used to cook so much, I may forgot why push myself work so hard in kitchen.
Not for pride. Not for stars, but customer's smiles.
Feel blessed I have so many love from you all. I will miss you all one day I left.
I will try my very best to create as many special dishes as I can before I leave.
I hope I can see you all smiles."

You're welcome -- thanks for the tasty food you're made for me since my very first visit to Sake Bar Ginn! Thanks also for copying what you wrote on Facebook for me (since, as you know, I'm still a Facebook holdout! ;b).

BTW, I'm not completely anti-Facebook -- e.g., there are options to share these blog posts on that platform! ;b

That looked very delicious indeed. Never thought of cooking meat stewed in Sake before myself. I have only used Sake on BBQ clams after they open up their shells by pouring a table spoonful of sake into them for a short while before serving.

I am only a weekend cook, but I might do some experiments myself later.

I can vouch for both those different preparations of pork belly being delicious. Maybe you should go over to Sake Bar Ginn to have a taste for yourself? ;b