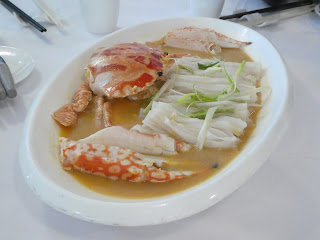 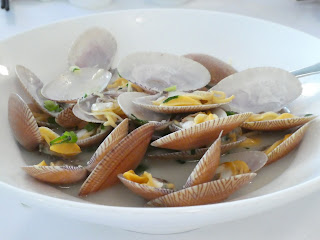 Another delectable seafood dish at The Chairman 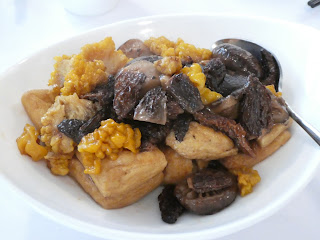 
Have you ever had a meal where everything tasted absolutely delicious?  I may have done so at a restaurant here in Hong Kong -- with a reputation for eschewing MSG even while serving traditional Chinese dishes (and also making an effort to focus on seasonal delights and getting fresh products from sources that include its own farm in Sheung Shui) -- which I've long wanted to go to but only finally did so for lunch today.


Since its establishment in 2009, The Chairman has received rave reviews from trusted foodie friends and food bloggers (including Tom of the sadly no longer updated TomEatsJenCooks, and the writer behind the e_ting blog).  But due to it being the kind of Chinese restaurant where it'd be better to dine at with more people than just one or two (which is the usual number when I have meals), I figured it'd be better to wait to go out with a larger group, even if this meant that I'd have to wait years to do so.


Although some years have passed, during which the initial hype has died down a bit and this dining establishment was awarded a Michelin star one year and then had it taken away another year, I've continued to have it in my sights.  So when I learnt that probably the two most food-loving of my cousins would be in Hong Kong over this holiday period and that one of them would have two friends coming along too, The Chairman was one of the restaurants I decided that we would have to eat at -- and duly booked a table for five there around a month in advance!


The day before, one of my cousins had been going on about how much he wanted to eat century eggs.  So, of course, we ordered precisely that when we saw them on the menu at The Chairman -- and thoroughly enjoyed not only them but the pickled ginger garnish that usually comes with them but, surprisingly, tasted much more like the sweet ginger served at Japanese sushi restaurants rather than harsher tasting version served at most other Chinese restaurants where we've had this particular delicacy that many Westerners don't seem to care for but which can be akin to comfort food for many ethnic Chinese.


More unusual, to our minds, was the other appetizer we ordered: wild clams cooked in fish broth and sake.  The clams were plump and juicy, and the umami-flavored broth actually tasted far more of sake than anything from the sea.  And although one tends to assume that much of the alcohol dissipates during the cooking process, there still was enough to get one of our party -- who estimates that she maybe drinks alcohol just thrice a year, if that! -- pretty red in the face!


Fortunately, she did manage to stay sober throughout the meal despite the biggest -- as in most substantial as well as star -- dish that we had being the steamed fresh flowery crab cooked with aged Shaoxing wine and fragrant chicken oil, and served with Chencun rice noodles. Again, the flavor of alcohol was quite strong in the dish, yet its overall broth/sauce was delicate-tasting -- as was the meat of its also very fresh-tasting seafood element.

When ordering the food, our waiter had indicated that we should only order one other main course besides the crab.  Fearing that he had underestimated our appetite, I ordered an extra portion of the noodles.  And boy, was I glad we did after that extra portion was soaked in the crab roe-rich gravy that had been part of the dish but had been placed in a bowl of its own.  Suffice to say that anyone who loves kani miso as much as I do will be in Elysium when lapping up this portion of The Chairman's justly famous signature dish!

Although it was much more modest looking than the crab dish (which was visually stunning as well as truly scrumptious), the mushroom-beancurd dish we ordered turned out to be another winner.  Bursting with umami flavor and texturally interesting, the multi-layered beancurd and morel (along with other) mushrooms are the kind of ingredients that can be enjoyed for their mouthfeel as well as taste.

Since I forewent the bowls of soup that the others on my table had elected to have earlier on in the meal, I had room for dessert -- and plumped for a scoop of the osmanthus and wolfberry ice cream, which proved delicious and a wonderful end to a pretty great meal.  As we sipped our tea and rested a bit before heading out of the restaurant, comments rang around the table as to how fine -- as in light and delicate as well as simply lovely -- tasting so much of what he had consumed had been.  And yes, I'm sure that mentally, a good number -- if not all -- of us were thinking that we'll have to return to The Chairman for another meal, and hopefully sooner rather than later! ;b
Posted by YTSL at 11:59 PM

HI YTSL! Sounds like an amazing meal! I have yet to try the signature crab dish!

Sound like where important people dinned at.
Coffee is on

It really was a wonderful meal. Re the signature crab dish: it'd be interesting to see what you make for it, given that your tolerance for alcohol is on the low side... ;)

The Chairman isn't as intimidating as its name makes it sound. I think it's more a place that foodies will appreciate than those who (think they) are important... :)