Hike and camera thoughts and talk 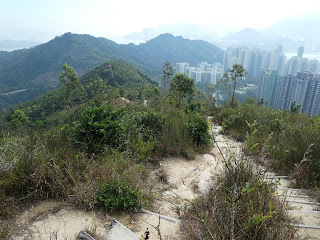 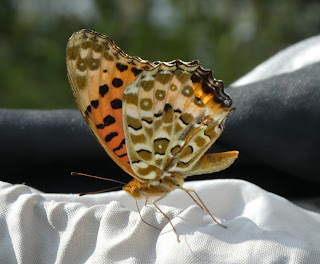 It may be winter in Hong Kong but it still can be
warm enough for the butterflies to come out to play :)
Two friends and I hiked Stage 3 of the Wilson Trail this afternoon.  While it was their first time, I had been on this scenic section of trail before -- and consequently knew to look out for the often strangely placed signs to be found on this portion of one of Hong Kong's major hiking trails.
Because of this -- and also the fervent wish on the part of one of my friends to make sure that we maintained sufficient distance from another hiker out today, whose blasting of Cantonese opera music on her radio was threatening to drive my friend nuts! -- we ended up completing this section of trail in a shorter time than the official estimates.  And this even though I spent quite a bit of time testing out my new camera along the way.
Before anything else: yes, my Sony Cyber-shot HX50V camera has died -- close to three years after it replaced my beloved Panasonic Lumix DMC-TZ2 after that other camera gave up the ghost after having to deal with what, in retrospect, appeared to be too much dust and rain on my 2013 Vietnam visit.  Rather than add phantom rays of light into dark pictures (like my Panasonic Lumix DMC-TZ2 began to do in its final days), the Sony Cyber-shot HX50V signalled that it was on its last legs by first over-exposing zoom shots, then going all dark on me less than two weeks after showing signs of malfunctioning.
In light of my previous Panasonic camera having lasted five years to the Sony's three, I leaned towards getting a Panasonic camera again this time around.  And after reading positive online reviews for what looks to be the current edition of the Panasonic Lumix DMC-TZ2 (which retains its 24mm wide-angle lens feature but now also has a 30x zoom (like the Sony Cyber-shot HX50V)), I've gone ahead and got a Panasonic Lumix DMC-TZ80 (aka Panasonic Lumix DMC-ZS60), and hope that it will serve me well for at least the next four or five years to come.
Judging from the photographs I took today (a day that actually turned out to be hazier than the rest of this week -- and warmer too! -- but still pleasant enough weather-wise), this camera looks like it'll satisfy.  Put another way: I like both the landscape picture and macro shot of a beautiful butterfly at the top of this blog post (and took with my new camera), and trust that you do too! ;b
Posted by YTSL at 9:38 PM

This stage 3 hike of the Wilson Trail shows you back in good hiking and photo shape after your recent trip...Sorry to hear your Sony camera didn't last longer...I bought the Panasonic Lumix ZS50 (the previous version of the camera you recently purchased) and I'm thoroughly satisfied with it after a year and a half of shooting. It is reasonably lightweight, has enough wide angle and zoom to meet any photo task and is a good traveler's camera. I've been mostly shooting nature shots, especially water birds, clouds, trees, reflections in streams and if I'm lucky, an insect close-up, although I haven't captured a butterfly as colorful as the one in this blog.

I hope you get years of wonderful local and travel photos with your camera.

Sorry your camera died. I think from the two photos in this blog post you have made a good selection in your new camera. Both photos, I think, captured what you wanted them to.

I'm still figuring out my new camera but so far, things look pretty promising. Basically, I'll be happy if this camera takes good landscape and critter pics on hikes, food shots at eateries I like and snaps of things (and people) that catch my eye when I am strolling about on the streets -- and lasts more than just three years (which I think is too short a life for a camera, even one which gets used quite a bit like mine tend to be)!