Kawaii art (for a) time in Sheung Wan! 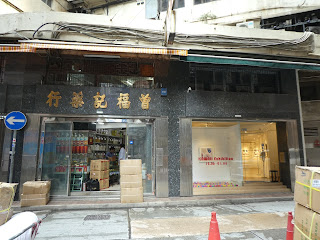 On a Sheung Wan street associated with traditional Chinese
herbal remedies can be found an interesting art gallery... 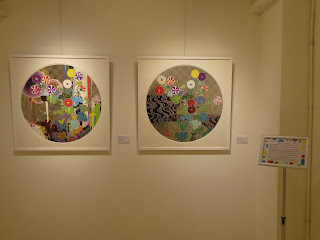 Within it can be found works by Takashi Murakami 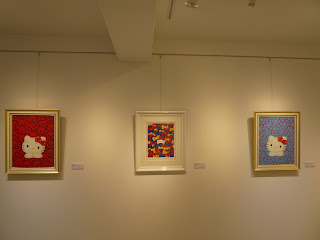 
Hello Kitty can be -- and has been -- spotted in a lot of places in Hong Kong.  Shopping malls and department stores, Sanrio Gift Gate stores (of course!), herbal tea shops, bakeries, book fairs, Lunar New Year markets, etc.  Even at protest marches and sites!  But earlier this week may well have been the first time that I spotted the cute cat's visage on artwork hanging on the walls of an art gallery.


Until January 8th, 2017, the Ko Shing Gallery is playing host to the Kawaii Exhibition featuring works by Hello Kitty's third and current designer Yuko Yamaguchi and her compatriot, Takashi Murakami (whose smiley flowers I adore and regularly see on display at the annual art fair formerly known as Art HK and now Art Basel -- Hong Kong).


Located in a quiet Sheung Wan street housing far more herbal medicine wholesalers than anything to do with art, this art space can seem out of place on the one hand but also quirkily original on the other.  And with a storefront composed largely of clear glass that renders the interior contents very visible, it's pretty alluring, especially -- at the moment -- for those whose aesthetics embrace color as well as things kawaii!


Upon entering the art gallery, my gaze immediately went to the wall on which there could be found four Hello Kitty limited edition works by Yuko Yamaguchi, one of which was inspired by Audrey Hepburn's character in Breakfast at Tiffany's (and is the only one with pink as its primary color -- a Hello Kitty design modification which was introduced during Yamaguchi's stint as Hello Kitty's designer).


For all of their undoubtedly high kawaii quotient, however, I must admit to having been more bowled over by a few of Takashi Murakami's works on display on the opposite wall of the gallery.  More specifically, I particularly like the works from his Kansei series which combined his trademark smiley flowers with distinctly traditional Japanese art elements, notably that from the ukiyo-e genre at which Hokusai excelled -- even while a couple of prints that veered away from his "superflat" tendencies to look well nigh three-dimensional were also pretty impressive!

So enamored am I by those Takashi Murakami works that I'd actually seriously consider getting one for my new apartment.  Something that makes me think twice (and thrice, etc.) about doing so is at least one friend who's been in my place complaining that there already are too many eyes around (admittedly belonging more to plushies and such than visible on works of art)! ;b
Posted by YTSL at 6:38 PM