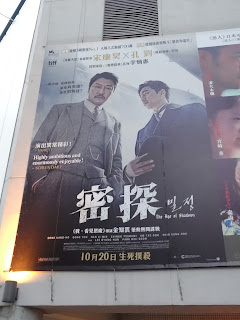 Song Kang Ho looks like he's gazing at you
from out of the poster for The Age of Shadows!


Even before I realized that The Age of Shadows had been chosen as South Korea's Foreign Language Film Oscar nominee for 2017, I knew I wanted to see it.  This wasn't so much because of Kim Jee Woon's period spy thriller's story -- which, on the surface, can appear to be yet another South Korean movie set during repressive Japanese colonial rule -- but, rather, its main star being Song Kang Ho.


Not only is this man a great actor but he also looks to be great at choosing movies to appear in, what with his filmography including major box office hits cum critical successes such as Shiri (1999), Joint Security Area (2000), The Host (2006), Secret Sunshine (2007), and The Attorney (2013).  And Song's fantastic track record continues with The Age of Shadows: seeing as it's a suspenseful cloak-and-dagger work which turns out to pack quite the emotional punch; so much so that certain scenes caused me to gasp out loud when viewing them and others have seared themselves into my memory -- thanks in no small part to the contributions of its complex main personality and the lead actor who portrays him.


For a large part of this atmospheric effort that's set in the decade after the Japanese annexation of Korea, Lee Jung Chool (Song Kang Ho) is a man many people hate, and certainly wouldn't trust.  Once a member of the fledgling Korean independence movement, he's changed sides and has risen up the ranks to become a captain in the colonial Japanese police force.  When we first catch sight of him, he -- together with a veritable army of menacing men -- are out to corner a desperate but defiant freedom fighter who just happens to have been a former classmate and friend of his.


The painful final moments of that doomed patriot's life give a sense of how much courage and sacrifice is required of those fighting for freedom, and suffering the audience will come to see and hear over the course of The Age of Shadows.  A film with the kind of torture scenes that are bloodcurdling as well as bloody, it most definitely hammers home the message that freedom is not free (a phrase I've seen used by pro-democracy activists in Hong Kong, whose cause I sincerely hope will not reach a point where people will act in desperation like in this South Korean cinematic offering that's actually inspired by a real-life event that took place at the colonial Japanese police headquarters in Seoul in 1923).


In what could be likened to a desperate throw of the dice, the decision is made by the upper echelons of the Korean resistance -- whose charismatic leader (Lee Byung Hun) operates out of Shanghai, along with trusted men (and at least one woman (Han Ji Min)) -- to try to turn the turncoat one more time; with this formidable task falling primarily to Kim Woon Jin (Gong Yoo).  A handsome charmer with nerves of steel along with far more fortitude than may be good for him, he'd be the protagonist in a more conventional -- and lesser -- film than The Age of Shadows, whose makers actually manage to throw up a number of surprises even while its general trajectory is actually fairly predictable.


As a cat and mouse game ensues, Kim has to effectively put his life in Lee's hands even while believing that the latter's Korean patriotism -- and also his realization, upon seeing his Japanese superior (Shingo Tsurumi)'s favorable treatment of a repugnant junior compatriot (played by Korean actor Um Tae Goo) at his expense, that he will always be a second class citizen in the Japanese-occupied country -- will eventually triumph over his pragmatic attempts at self-preservation.  And the stakes become even greater when it turns out that Lee's cooperation is key to the success of a planned attack on the Japanese in Seoul using explosives acquired in Shanghai from Hungarian anarchists.

Full of breathtakingly intense dramatic moments, The Age of Shadows also excels in its action scenes which are incredibly well choreographed and visually breathtaking.  Both the ones near the start and conclusion of the film are pretty amazing but the beautifully edited set pieces which take place on a train and at a train station will have their fans too.  And while the choice of music initially irritated and threatened to distract, I actually did enjoy the movie's use of Ravel's Bolero and reckon that it played a big part in ensuring that the scenes in which this classic piece of music is heard really were rather spectacular!