Feasting at breakfast at Gora-Kansuiro! :b 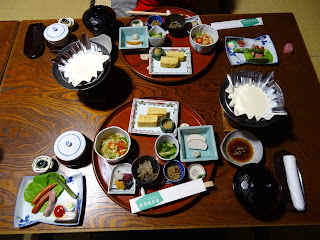 Even if I told you that the breakfast in the above photo
was for two people, it still looks like a lot, right? ;b 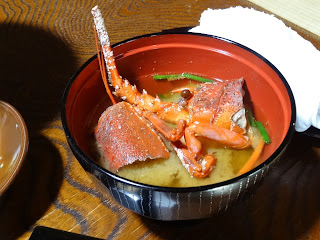 It's not every day that one gets served lobster miso soup,
especially at breakfast! ;D 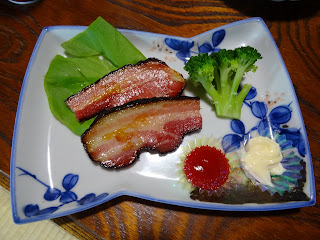 And look at the bacon that was as tasty as it's beautiful! :O
"Together with hot spring baths, dinner is the highlight of a ryokan stay."  This statement on the japan-guide.com website which I've found to be pretty much infallible captured the feelings of the three people as well as myself who spent two nights at Hakone's Gora-Kansuiro since two of us were particularly attracted to its onsen facilities (which included a rotenburo in the ryokan's grounds) while the other half of the party (including yours truly) was most looking forward to the kaiseki dinners that would be served in our rooms.

But even while I knew to expect that dinner at a traditional Japanese inn would be something special, the likes of Anthony Bourdain -- who had proclaimed in his A Cook's Tour: In Search of the Perfect Meal that dinner at a traditional Japanese inn he had stayed at in the seaside town of Atami "may have been the greatest thing ever", but then followed up that statement by declaring that "Breakfast was another thing entirely"! -- got me thinking that breakfast would be a far less delicious affair.

In retrospect though, I really should have known better.  After all, I'm a fan of the complimentary breakfasts at the branches of the Japanese business hotel chains that I've stayed at (such as Dormy Inn and Toyoko Inn), and also the budget Japanese breakfasts to be had at many a modest railway station eatery.  And, unlike Mr Bourdain, I happen to actually love natto and mountain potato (or yam; i.e., naga-imo or yama-imo in Japanese) in all their gooey glory!

As it so happens, neither natto nor yama-imo were among the many items that we were served for breakfast on either of the mornings that we were at Gora-Kansuiro.  Instead, what appeared to me to be the most exotic things we were served at our first breakfast was a salad and sausages!  Although I initially suspected that this might have been a nod to our foreign origins (and, in particular, two of our party being white Americans), I was assured that these now appear fairly regularly on Japanese breakfast tables these days.  And whether un-Japanese or not, I really didn't mind at all that the most amazing looking -- and tasting -- bacon was included as part of breakfast the day that we sadly had to say goodbye to life at this lovely traditional Japanese inn!
Actually, perhaps the most shocking thing about both the breakfasts we were served was how substantial they were!  Consequently, as delicious as it was, I was unable to eat all of my first breakfast at Gora-Kansuiro.  In particular, I couldn't finish the amazingly smooth and creamy tofu that we had been served a very general amount of along with such as tamagoyaki (grilled egg omelette) with an absolute delicious sweet radish topping, tsukemono moriawase (assorted Japanese pickles), a variety of cooked vegetables, a mixed vegetable salad, and a plate of sausages!
Prepared to do the serving of tofu justice the next morning, I made a point to eat less rice (even though I do looove my rice) and managed to devour pretty much everything that I was served.  In all honesty though, this wasn't all that difficult since, if anything, the second morning's breakfast was even more delicious than the first morning's; with standout items including the lobster miso soup, a cooked "just right" onsen tamago (hot spring egg), sublime sujiko (salted salmon roe still in the egg sack) served with grated radish, soft mentaiko (spicy pollock roe), and a hijiki salad that tasted as good as it's supposed to be good for you.

Although I expected to want to go back to sleep after eating such substantial repasts so early in the day, I actually was okay to do quite a bit of walking and exploring afterwards.  And while it's true enough that I didn't feel a need to have lunch while in Hakone, I actually found myself being ready for dinner -- and even looking forward to it being quite the feast!

Something else that I definitely noticed was how umami-rich the food served at Gora-Kansuiro, at breakfast as well as dinner, was.  And as strange as it may seem, among these was an amazing concoction I fashioned out of two very different items I was given: strips of nori seaweed, which I wrapped around the strips of bacon we were served the second morning! ;b
Posted by YTSL at 6:28 PM

It was interesting -- and, more importantly, plenty delicious! ;b